Beyond the possibility of resistance developing, ineffective control exacts cost to growers in lost yield.

Quantifying the losses that poor weed control can cause grower customers is no simple matter. Shane Eck, location manager at Mid Kansas Cooperative (MKC), Lindsborg, KS, says measuring losses quantitatively due to the weeds “could be tough without doing a side-by-side comparison.”

Fortunately, many researchers have taken on that “hard numbers” question.

Mark Rosenberg, Extension agronomy/weeds field specialist, South Dakota State University (SDSU) reports on one sobering test his team did: Even though glyphosate was applied two to three weeks after corn and weed emergence in high weed density plots, yield losses measured as much as 20 to 40 bushels per acre. 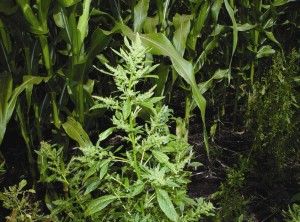 Studies show that weeds can reduce corn yields by about 1% per day starting about one week after corn/weed emergence. Pictured is mature waterhemp in corn.

Rosenberg says preemergence products can also help soybeans, “but mostly for the benefits of increasing the consistency of weed control, managing glyphosate resistant weeds, and increasing flexibility in the timing of post-emergence application.”

Growers can actually identify the most competitive weeds in corn: they’ll be three to four inches tall when corn reaches the V-3 to V-4 growth stage. Research at Iowa State University has shown these competitive weeds can reduce yields by about three bushels per acre for every day they are left uncontrolled. Rosenberg says SDSU studies proved these weeds can reduce corn yields by approximately 1% per day starting at about one week after corn/weed emergence. Bottom line: If these weeds are controlled early, crops will develop the vigor to compete with later emerging weeds.

Weeds may do even more than compete with crops for valuable resources. According to work reported by Bob Hartzler, Extension weed management specialist, Iowa State University, a corn plant can actually detect weeds in its vicinity by detecting changes in light quality when sunlight is reflected off of the weeds. The corn then reallocates its resources to grow taller to reduce the chance of the weed intercepting sunlight the corn wants. The phenomenon is called shade avoidance. Such resource re-channeling has a negative impact on future crop growth.

In fact, research in Canada found that corn growing with weeds was affected by the shade response as early as three days after emergence — with its highest sensitivity to the shade issue in the first week after emergence.

Hartzler has found determining that moment when weeds first cause yield loss — the “critical period” — can be complex because of the number of factors involved: weed species, number of weeds, emergence date; cropping practices including cultivar, row spacing, population, tillage and environment. He says the critical period may occur as early as two weeks or as late as 10 weeks or later after planting.

In its resources, the Weed Science Society of America (WSSA) points out that poor weed control has consequences beyond yield losses, including reduced commodity prices because of weed-seed contamination, reduced land values, costs of mechanical and cultural controls, and ultimately the additional expense of alternative herbicides or cropping systems — or both — for managing resistant weeds.

Dealers we talked with have seen yield losses in clients’ fields. When asked how bad resistance is in his territory, Jeff Consbruck, seed lead, CPI Coop, Hastings, NE, said over the past couple of years he’s seen some yield being impacted from weeds that treatments could not knock down. While CPI hasn’t seen extensive losses so far, “if we don’t get on top of this soon, we will have horror stories to tell,” he says.

Getting on top of the issue takes a commitment not all growers are willing to make. Kevin Mainord, sales and marketing director with MRM Ag Services, East Prairie, MO, estimates that about 80% of customers are adapting to new practices needed to deal with resistance — Roundup is not controlling the spectrum of weeds it used to. But 20% are not willing to go into the complexities and costs of multiple product applications.

One service MRM’s customers can purchase is scouting for both weed and insect issues. The investment offers two-for-the-price-of-one benefits.

Mainord says timing herbicide applications for optimum kill is critical. If weather becomes a problem and delays ground spraying at key windows, his company can go into a customer’s fields with aerial applications because the firm operates its own plane. Managing weeds this way adds cost, but the yield saved may be worth it.