As resistant weeds become more common in crop fields across the country, the entire agricultural community is scrambling to keep pace.

As a long-time independent ag retailer in St. Marys, KS, Doyle Pearl of J.B. Pearl Sales & Service Inc. has grown used to some interesting sights in his grower-customer fields. However, on a recent visit to one customer’s farm, Pearl at first thought he had somehow ended up on a holiday-oriented operation instead of one devoted crops.

“When I looked into the field, I at first thought this grower was harvesting Christmas trees,” says Pearl. “But when I looked closer, I saw these large, bushy plants weren’t pine trees, but weeds. It was then I realized that herbicide-resistant Palmer amaranth had arrived in our area.”

Unfortunately, Pearl is not alone in witnessing this kind of sight. Since the first herbicide-resistant marestail was discovered in Delaware in 2000, the number of similar hard-to-control weeds has rapidly spread across the U.S. At last count, say experts, there were some 14 species of weeds showing single or multiple forms of herbicide resistance in more than 30 states affecting thousands of acres of cropland.

“Palmer amaranth is a huge problem for growers because we’ve seen some plants that have had three applications of Roundup Ready WeatherMax and survived,” says Dwight Lingenfelter, a weed scientist in the department of plant science at Penn State University.

“Waterhemp is another weed that has shown resistance to multiple forms of herbicides and modes of action. There’s even one population of waterhemp that was recently discovered in Iowa that is showing some resistance to 2,4-D.”

Even worse, say industry observers, the cost of dealing with these herbicide-resistant weeds is quickly becoming an issue. For example, according to Dr. Larry Steckel, a weed scientist with the University of Tennessee, resistant Palmer amaranth cost Tennessee soybean growers more than $200 million in the past two years in increased herbicide costs, application ex­penses and yield loss.

And if the plants themselves aren’t bad enough, ag retailers and their grower-customers need to be equally concerned with the seeds these herbicide-resistant weeds produce. According to Willowood USA’s Dr. Jeff Stachler, one waterhemp plant discovered in Moorhead, MN, produced 644,000 seeds. In another example, running water following a rain event in a field with Palmer amaranth present was found to contain 1 million seeds only 20 minutes after the storm. 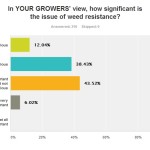 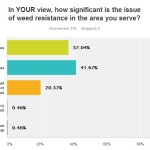 “If one plant produces 100,000 seeds with only 25% emergence and 10% of those plants survive, these resistant plants can produce up to 6.25 million plants two years later,” says Stachler.

For the most part, ag retailers understand that herbicide-resistant weeds are a major problem for their grower-customers. According to a survey recently conducted by CropLife® magazine, 79% of dealerships and cooperatives say weed resistance is a serious or very serious problem in their areas. Similarly, 51% of the grower-customers themselves view resistant weeds as a serious to very serious problem (see graphs).

The Quest For Control

When it comes to figuring out how to combat these resistant weeds, opinions from experts are varied. Some have advocated hand weeding mixed with alternatives to traditional herbicide programs as an option. “In 2010, it took 110 hours to completely hand-weed a 50-acre field, costing $33 per acre charge based upon a $15 per acre rate,” says Stachler. “In 2011, with the same herbicide program, it took only five hours to completely hand-weed this field — a cost of only $1.50 per acre.”

In other countries such as Australia, growers combating herbicide-resistant weeds have adopted an all-out war on the seeds. To achieve control here, growers have taken to baling their field trash into bundles used for livestock feed or burning this residual with flame-producing equipment that is pulled along behind the harvester.

Thankfully, here in the U.S., the situation isn’t quite as extreme just yet and 81% of ag retailers polled by CropLife® say they presently have the tools and knowledge needed to help growers manage their resistance issues.

However, as Penn State’s Lingenfelter says, ag retailers shouldn’t count on a completely new herbicide to come along and solve the problem of resistant weeds. “There have been plenty of new products introduced into the market to combat resistant weeds over the past few years,” he says. “But none of these offer a new mode of action option. The fact of the matter is there has been no new mode of action introduced into the herbicide market for the past 20 years. And even if a new molecule was discovered tomorrow that might offer a new mode of action for weed control, it wouldn’t be available for use on the market for another 10 years or better.”

Instead, says Willowood’s Stachler, retailers and growers should get used to viewing weeds in the field in a whole new light. “It is best to assume that any plant of single species present in a field is resistant at some level,” he says.

2021 MAGIE Equipment Preview: 35 Products You Can Expect to See at This Year’s Show