Recognizing the presence of herbicide-resistant weeds and formulating a total management plan is becoming more important than ever.

“In prior years it was always the guy down the road with the problem,” says Tony VanOverschelde, agronomy manager, CHS Eastern Farmers, Brandon, SD. “But once you recognize that resistance exists, you’ve got to adjust your practices to the situation. This isn’t a problem that’s going away anytime soon.” 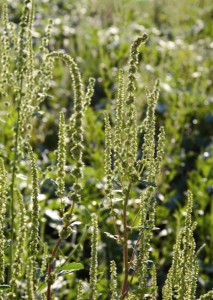 Get With The Program

“Generally speaking, my first recommendation is to rotate to some other type of herbicide program, away from just straight glyphosate,” says Bradley. “Right now residuals are the number one thing I recommend, especially when it comes to waterhemp.”

Waterhemp is a big problem this year in some southern areas of the Dakotas and southeast Minnesota, according to VanOverschelde. Getting out in front of the problem before it becomes unmanageable is the most successful strategy, he says.

“We’ve figured out that if the farmer has some type of resistance, the following year we stress not to try to save money on the front end,” VanOverschelde says. “You’ve got to hit it right the first time, because if you get behind the eight-ball on this you can’t catch back up.”

“Marestail is going to take a systems approach where we start with a fall herbicide program, control the emerged marestail and then burndown again in the spring with a control herbicide,” he says. “With waterhemp, which we are getting more calls on this season than ever before, we’re encouraging farmers to use a residual herbicide in the spring, and/or layer residual herbicide in-crop. We’ve got to give the glyphosate some more help.”

Palmer amaranth is, as Nagel puts it, “a game-changer for us” because the first confirmed presence of the pest occurred just last year. However, he believes that pigweed has been present in Indiana for the past few years, it’s just been routinely misidentified as waterhemp during that time.

“Palmer amaranth is just a bad actor — it’s a pretty big seed producer, and we have herbicides in corn that can control it — but Roundup Ready soybeans had some troubles this year,” he says. “We’re actually putting some programs together for next year and one of the strategies is going to be having two residuals involved. You put a residual down at planting time and then you spray postemergence. Then you follow that with another residual so you get multiple flushes of it.”

Other useful tools on the horizon are the dicamba and 2,4-D cropping systems, according to Nagel.

“Unfortunately, the dicamba system that we thought we were going to have for 2014 is delayed,” he says. “Now, Roundup still works for us fairly well, as we are getting efficacy on the majority of the weeds. But there are areas where we are having problems and we’re trying to be proactive by telling growers ‘if glyphosate still works for you, then great, but you need to start using a residual and quit relying on glyphosate alone.’”