Sophisticated tank mixes, multiple adjuvants and surfactants — this is the future of herbicide application.

What was once an activity a trained monkey could likely complete with relative success, herbicide application has progressed into somewhat of an art form as resistant weeds challenge the skills of even the most seasoned applicators.

“You used to be able to just add anything to Roundup and — as long as something was spitting out of the nozzles — it probably worked. Now it’s all about gallons per acre and overall coverage, just making sure you are getting good coverage on the weeds,” says Tony VanOverschelde, agronomy manager, CHS Eastern Farmers, Brandon, SD. 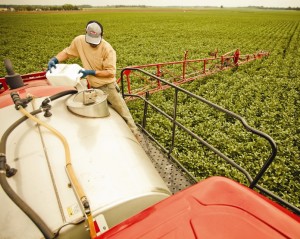 With so many different products beyond glyphosate being introduced to the tank mix, compatibility agents are expected to continue their upward growth in sales over the next few years, according to adjuvant experts.

“When you get into glyphosate, you’re using systemic herbicides so you’re going to be using larger droplets,” he says. “What’s changing is where we have resistant waterhemp or Palmer amaranth, it’s all about the contact herbicides, so with those particular products we find ourselves having to reeducate some farmers and say ‘Hey, 10-12 gal./A isn’t sufficient, you need to be around 15-20 gal./A and use medium to coarse size droplets rather than just coarse to ultra-coarse.

“And coverage is the name of the game.”

Back To The Basics

Throughout nearly every walk-of-life, things typically tend to come full circle. In a world of resistant weeds, herbicide application is not spared from this fact, according to Kevin Bradley, weed scientist, University of Missouri.

“We’re trying to re-emphasize things that were done by my predecessors 50 or 60 years ago,” he says. “There are a number of researchers around the country that are going back and looking at different things, such as the effect of mow-board plowing, row spacing and soybean seeding rate — things I like to call cultural practices — it’s nothing new. We have data from decades ago that shows that these practices should be implemented with herbicide practices to get the best possible control.”

Adds VanOverschelde: “Roundup made spraying easy — now with resistance you need to pay more attention to tank mixes and adding stuff to Roundup. You’re concentrating on adjuvants and surfactants, spray tips and gallons per acre — whereas with Roundup you didn’t have to do any of that. It’s kind of what we were doing in the pre-Roundup days.”

Becoming well-versed in the various tank mixable products and their interactions with glyphosate is crucial in finding a solution to resistance, according to Nagel.

“We have a lot of (tank mix) postemergence choices in corn, and we’ve got the coming dicamba products and the pigment inhibitors, so we have tank mix partners that can help the glyphosate,” he says. “On the soybean side, especially when it comes to marestail, we don’t really have a great tank mix partner yet, and we’re getting variable performance — I call it suppression because it’s really not full control. Sometimes we’ll suppress the marestail for a while and right now it’s coming through the canopy.

“And then the adjuvant package a lot of times is different too,” Nagel continues. “You may have been adding AMS with glyphosate, but now you’re typically back to using high surfactant oil concentrates and/or a nitrogen (N) source of some sort.”

VanOverschelde agrees that the days of loading up a tank with straight glyphosate and hitting the field are mostly long gone. “We’re doing a lot of add-ins with Roundup. Rarely are we doing straight roundup on anything,” he says. “Roundup and FlexStar is one that pretty much is going on everything in our territory. In the past we were doing maybe 25% residuals and now our bean residuals are increasing. What you’re doing is just adding a couple modes of action.

“One thing with Roundup is you never really had to do planning,” VanOverschelde continues. “You just said ‘well I’ll spray it twice with Roundup’ and that’s really all the thought you put into it. Now you’ve got to plan for weed size, putting on a preemergence, the right tank mixes and so on. Planning wasn’t nearly as important as it is now.”

A Take On Tillage

Re-examining tillage practices and utilizing fall residual herbicides are additional ways a grower can regain some control over unruly fields, according to Nagel.

“We’re encouraging farmers to look at fall residual programs because you can actually do a fall herbicide program for no more, or sometimes even less dollars, than tank mixing in-crop to control marestail,” he says. “Also, I think these weeds do fairly well in reduced-tillage systems, so if you do aggressive tillage it tends to disrupt that fall growth — and you’re essentially controlling it with your tillage.”

Multiple adjuvants are also becoming a popular practice, as Precision Laboratories’ Jim Reiss, president, told us back in March.

“We’re seeing a significant increase in the number of acres that have combinations of two or three adjuvants in a single application,” says Reiss. “In the past, a lot of glyphosate acres received some type of water conditioning agent and drift control adjuvant premix. As more glyphosate acres include a companion herbicide or fungicide, that addition of a second product often drives the need for more adjuvancy to maximize performance and return on investment in the additional tank mix partner.”

“Unless we start changing our practices — as in adding more tank mixes, better planning and so on — it’s just something that’s not going to go away,” says Nagel. “Farmers, retailers — everyone just has to adjust to the situation.”