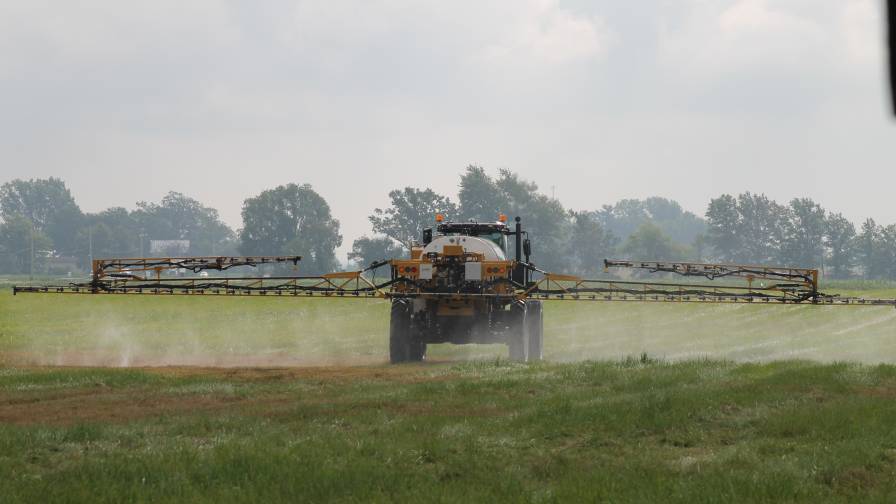 To ensure custom applicators were equipped to properly apply on dicamba-resistant crop acres, the major suppliers in the field have spent the better part of late 2016 and early 2017 hosting training programs across the country.

As the problem of herbicide-resistant weeds has expanded across the country, crop protection product/seed companies have come up with numerous new options for custom applications and their grower-customers to fight back. One of the most promising, according to many experts, is the new dicamba-resistant cropping systems now being made available. These began appearing across the nation’s fields at the beginning of the 2017 planting season.

However, even before their formal introduction to the agricultural marketplace, some weed scientists were issuing warnings about their possible misuse in the field. “The dicamba option is coming, there’s no question about it,” said Dr. Kevin Bradley, Associate Professor at the University of Missouri, speaking at the Wisconsin Crop Production Association annual meeting back in January 2017. “But it’s another question altogether whether we can steward this technology, and time will tell if that’s true or not.”

Bradley went on to point out that “very low levels of dicamba will cause damage to other crops,” pegged at 1/30,000th of the labeled rate by most experts. “And we’ve already seen this kind of damage in the bootheel of Missouri in 2016, where approximately 45,000 acres of soybeans were affected by dicamba applications,” he said.

Fast forward to the middle of 2017 and more dicamba damage has been reported. In particular, the states of Missouri, Arkansas, and Tennessee received multiple complaints from growers of suspected dicamba damage to their crops. In fact, according to Extension experts, more than 3.1 million U.S. acres have likely suffered such dicamba-related crop damage this year, which would represent 3.5% of all planted soybean acres throughout the country.

To make certain custom applications and growers were equipped to properly apply on these dicamba-resistant crop acres, the major suppliers in the field — Monsanto, BASF, and DowDuPont — have spent the better part of late 2016 and early 2017 hosting training programs across the country. One such instructor was Dr. Mark Hanna, Extension Agricultural Engineer at Iowa State University. Speaking this past February at the Ohio AgriBusiness Association annual meeting on behalf of BASF, Hanna pointed out that the company had determined from user surveys that some form of formal dicamba training would be the key to using this technology correctly.

“If we are going to be good stewards of these new products, we have to know now how they will fit into the existing application systems we already have out there, and if we will make significant changes for them to work for us,” said Hanna.

The Label is the Law

According to Chris Weed, a representative for KOVA of Ohio, one of the first keys for proper application training for dicamba and other auxin herbicides is paying close attention to the label instructions. “The label is the law, I’ve often told people in this industry, but that’s never been more true than with these products,” says Weed. “If something isn’t listed on the label for use with the dicamba you are applying, and you decide to add it without checking, you’ve violated the label and will be held accountable for the consequences.”

The University of Missouri’s Bradley agrees with this point, adding that these new labels are different than ones that have come before them. “Concerns about drift led the U.S. EPA to issue time-limited registrations for the auxin herbicides dicamba and 2,4-D of two years and five years, respectively,” he said, with dicamba’s label set to expire in November 2018. “Unless growers show they can use these herbicides as labeled, the registrations could easily be revoked.”

Besides paying extra close attention to the label, custom applicators/growers applying dicamba also need to re-train themselves regarding weather conditions. According to Bradley, there are strict label limits on wind speeds (between 3 and 10 mph) and weather conditions at the time of application to reduce the danger of auxin herbicide spray droplet and vapor drift. “Most people are familiar with spray droplet drift but vapor drift is the movement of a pesticide in the form of gas or vapor during or after application,” he said. “During periods of high temperatures and low humidity, vapor drift of auxin herbicides can occur up to three days after application.”

For this reason, Bradley said application of auxin herbicides such as dicamba should be avoided during temperature inversions, which are typically characterized by clear, cloud-free evenings with calm air followed by dew or low-lying fog that forms in the morning. “When vapor containing the herbicide active ingredient becomes suspended in the stable air mass, it can drift miles away from the intended target,” he said.

As for the sprayer equipment itself, one of the most important aspects for auxin herbicide applications is thorough clean-out. “Keeping the sprayer completely clean after dicamba applications is a must because it only takes a minute amount of dicamba left in the machine to gut crop yields since it’s a growth regulator,” said Iowa State’s Hanna. “And by total clean-out, I mean everything, including screens, strainers, dead spots at the end of the boom, and the exterior.”

For tank clean-out of a sprayer that has applied an auxin herbicide, Hanna recommended that applicators and growers use a triple-rinse approach — a good flush with water, followed by a second rinse using a commercial deterrent for at least 15 minutes, and finished with another rinse of clean water.

However, in the deterrent phase of the clean-out, applicators/growers can’t use products that contain ammonia, since experts say they can break down the chemical bonds in modern dicamba formulations into their acid forms. Instead, products such as Work-Horse from Atlantic-Pacific Agricultural, Inc. are recommended since they are made without ammonia, chlorine, alcohol, or bleach.

“Work-Horse has a proprietary formulation that is more than a detergent-based tank cleaner,” says Joe Brennan, Product Development Manager for Atlantic-Pacific Ag. “It has detergents, surfactants, sequestering agents, and polymers to not only clean, but keep particles suspended in solution for easy flow from the tank. This keeps residue from staying/sticking to tank walls.”

Regardless of how much training custom applicators and growers receive on using these new products in their machines and fields, KOVA of Ohio’s Weed says that correct application will also require a mind-set change as well. “Many times, I’ve known people in this business who’ve had the attitude that everything will be okay, no matter what they do,” he says. “But I’m telling you — if we do this with this technology, we won’t keep it. And if this goes away, what will we do about the resistant weeds problem? Look at how long it took to get this technology!”

The University of Missouri’s Bradley said something similar during his speech back in January. “This dicamba thing is a real game-changer in application,” he said. “But it’s nothing like when glyphosate-resistant crops were introduced back in the mid-1990s and it can’t be treated the same way or there will be major problems. My message here today is simple — if I can scare you a little to realize that this is very different and needs to be treated as such, then that’s exactly what I’m trying to do!”

Deere Makes Play to Change the Narrative of Farming and Technology

Micronutrient Suppliers Enter 2020 as Resolute as Ever