Vince Wertman harks to “Moore’s law” — a computing term that originated in 1965 — when asked to describe the pace of the technology that melds seed treatment and biology.

“The simplified version of this law states that processor speeds, or overall processing power for computers, will double every two years,” Wertman says. “Biological products, especially since 2008, have increased with the same fold of increase.” 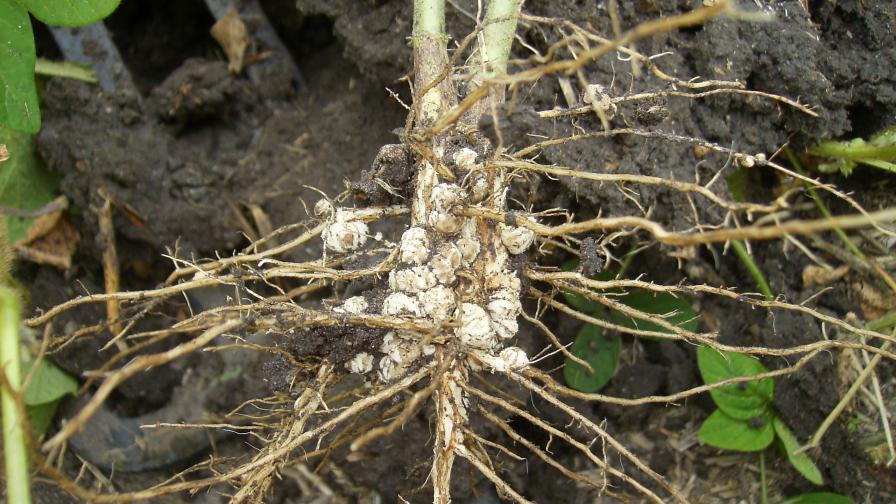 Soybean seed treated with an inoculant forms large clustered nodules that provide nitrogen to the plant. Photo courtesy of ABM.

At ABM, where Wertman is the Technical Services Director, the Van Wert, OH-based developer of agricultural biologicals is using computational power to bring new products to market. ABM applies deep (machine) learning as a part of its trademarked Smart Selection of next-generation biologicals. “Within five years,” Wertman says, “the biological product offerings will be greatly enhanced, just as the next generation of computing will be.”

In the process an increasing number of companies — large and small — are banking on biological seed treatment products, according to A.J. Hohmann, the U.S. Marketing Manager for Acceleron, a brand of Bayer.

“Companies have recently been investing in biological products because they provide an opportunity for rapid innovation, whereas launching a new corn trait, for example, can take many years and millions of dollars to develop and bring to commercialization,” Hohmann says. “Additionally, the data behind biologicals continues to better illustrate how they can make nutrients more available to plants, helping maximize yield potential and mitigate variability both within and between fields.” 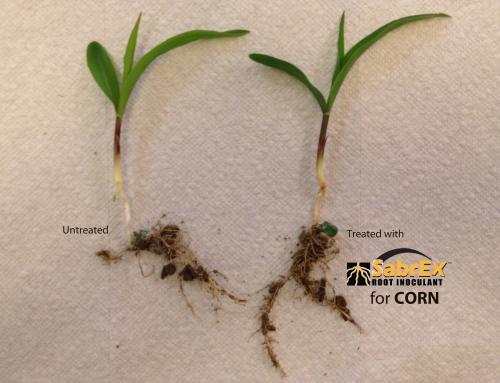 Side-by-side comparison shows the early effects of increased root growth when seed is treated with a biological. Photo courtesy of ABM.

Historically, the focus of biologicals has been on soybeans, Hohmann says. “But I think you will start to see more of a presence in corn,” he adds. Acceleron, for instance, will launch its BioRise 2 Corn Offering in 2019. “We continue to put heavy resources into our R&D as we develop these next-generation bio-enhancers — not just in corn but other crops as well.”

Biological products provide growers season-long advantages, Wertman says. They are multifunctional and establish long-term relationships with plants that are highly beneficial for the plant’s overall health, vigor, and yield, he says. They also offer a level of safety that is not often offered with traditional chemistry, he adds.

Hohmann concurs: “Nutrient and moisture deficiency seem to be constant concerns of farmers across the country. These deficiencies can impair root growth, making it harder for plants to get the nutrients and moisture they need. Biologicals make nutrients more readily available to plants, helping maximize yield potential. While benefits vary by crop, these products can also enhance functional root volume and increase nutrient uptake, protecting plants from moisture or nutrient stress.”

Claims that biologicals are snake oil or pixie dust should be contested, Hohmann says, by the fact that research and technology around the products have come a long way in recent decades. “In fact, we begin our development process by taking thousands of strains straight to the field to ensure that the products we are developing generate real results on real farms,” he says.

Ag retailers should be prepared to relay the benefits of biologicals to growers, Wertman and Hohmann say. According to Wertman, the average return on investment of seed-applied biological products averages at least 1:5, “and is often greater,” he says.

“The formulation, application, and handling of biologicals is greatly improved over the last 15 years,” Wertman says. “Use rates continue to decrease, with on-seed stability and package shelf life increased. Treatability of biologicals, whether commercially or farm applied, is vastly improved to ensure quick and easy application, handling, and planting.”

Adds Hohmann: “Retailers should know that, by educating their growers on the benefits of bio-enhancers and adding bio-enhancers to their offerings, they can deliver additional value and expertise to their customers, which differentiates them from the neighboring competition while using the power of nature to help their growers maximize every seed’s potential.”

Bio-enhancers in the Acceleron BioAg portfolio are broadly available in a variety of formulations, Hohmann says, including liquids or wettable powders that local dealers can apply to formulations that can be applied directly by growers through their planters’ seed boxes or in-furrow applications. Bio-enhancer prices vary depending on the technology and crop, Hohmann adds; however, all are priced to “provide a healthy ROI to the farmer based on years of broad-acre testing that go into the development of each of our products.”

ABM’s biological products follow a “good, better, best offering,” Wertman says, with the entry being under $1 per acre up to $6 per acre for a complete system product offering.

0 1 5 Banking on Biologicals in Seed Treatments