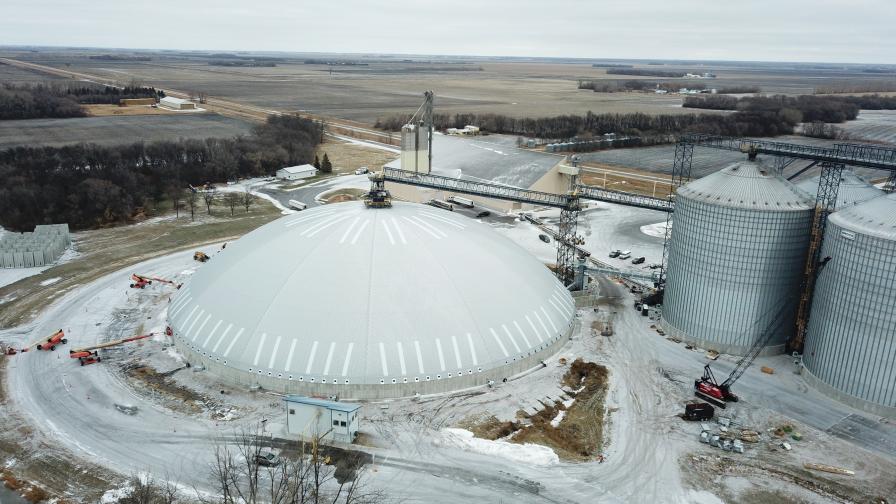 The Agridome can convert outdoor piling areas into permanent storage without any compromise to existing infrastructure. Pictured is Agridome constructed in Beltrami, MN.

The available methods for covering temporary grain storage areas have always come with a few headaches. Until now. Today, with the introduction of Agridome, Geometrica is offering a new form of secure, high-volume storage with improved functionality — at a fraction of the cost of new bins.

The Agridome can convert outdoor piling areas into permanent storage without any compromise to existing infrastructure or how and when grain can be loaded and unloaded. Made possible by Geometrica, Inc., a global leader in the manufacturing of long-span domes, the Agridome brings an incredibly strong, permanent cover made of galvanized steel that’s assembled quickly on site using mechanical joints.

“We’ve been building domes like these for more than 25 years, and the core strengths of our business—world class quality and long-span technology—are now translating into improved profit potential and efficiency for ag operations,” says Francisco Castaño, chief executive officer for Geometrica. “From standing up to Mother Nature to the ease of moving grain in and out, the initial response has been tremendous.”

Among the Agridome’s biggest selling points:

PR Newswire is a distributor of press releases headquartered in New York City. The service was created in 1954 to allow companies to electronically send press releases to news organizations. See all author stories here.