In our interview on how retailers and growers should approach the 2021 season, Dane Bowers, U.S. Technical Product Lead for Herbicides at Syngenta, mentioned one of his take-home messages of the past several years: Managing resistance is less a technical problem than a human behavior problem.

”I think we have a pretty good idea on how to handle this from a technical standpoint. There are challenges — don’t get me wrong,” he acknowledged, “but we’re all creatures of habit. We tend to do the same thing if it works for us.”

We’d like to think 2021 will bring recovery in every sense of the word, but until then, it’s an excellent time to get down to the nitty-gritty of weed management. See just some weed escapes, but not too many? “That should be the canary in the coal mine,” Bowers advised. “Any time you see few escapes in-field, you should be thinking: have I used this program too long, have I not incorporated enough other sites of action into my herbicide program, and what could I do differently to avoid that? Typically, in the first year of a resistance scenario, you don’t really think you have a problem, then it gets worse in year two. By year three, it’s a disaster. It’s really about getting ahead of it.”

Atop Bowers’ list of recommendations for next season, and echoed by countless agronomists, is to: 1) Understand the unique challenges of any given farm, plus the driver weeds, and 2) Understand the need to start clean and stay clean. This means deploying a strong preemergence residual herbicide followed 14 to 21 days later by an overlapping residual, always incorporating multiple effective sites of action to reduce risk of resistant weeds going to seed.

“The most important part and often times the hardest part is actually sticking to that plan as prices and environmental conditions will discourage us from making the right decisions,” Drake Copeland, FMC Technical Service Manager for Michigan, Ohio, and Indiana pointed out.

“I think a good residual program with multiple modes of action should be one of your No. 1 choices when you’re thinking about herbicides,” Wolf said. “You saw that really plain as you went down the road in August and early September in the West. The people that had residuals down and added more residuals in-season, their fields looked pretty good with very little waterhemp sticking up. The people that skipped a bit on residuals, there was definitely a lot of waterhemp showing up in late summer and early fall in Minnesota, Iowa, and the Dakotas.”

Bowers stressed how critical the use of a preemergence herbicide is with dicamba products, notably in light of the first identification of dicamba-resistant Palmer by Dr. Larry Steckel at the University of Tennessee (UT).

Steckel, on his UT blog, wrote that looking forward to 2021, a pre-applied residual that is effective on Palmer is now a necessity. Moreover, timely applications of Liberty must be used shortly after a dicamba application to remove escapes.

This is the fifth herbicide mode of action to which Palmer has become resistant since 1994 in Tennessee, Steckel noted. “If we take that 26-year period and divide by five modes of action the math would indicate that weed will evolve resistance to an effective herbicide in just 5.2 years of widespread use.”

In Syngenta’s portfolio, its Tavium Plus VaporGrip Technology dicamba premix contains S-metolachlor, providing three more weeks of residual activity than dicamba alone. When applied post-emergence in a program with a preemergence herbicide, such as Boundary 6.5 EC, BroadAxe XC or Prefix herbicides, “it provides the best chance of a one-pass post-emergence herbicide application in soybeans,” according to the company.

“It’s a really strong product to set up weed control ahead of soybeans, regardless of the trait that you have, and it provides some flexibility in that we’re not putting all our eggs in a residual package. You can come back with an early post with a Group 15 herbicide, and it’s also loaded with a full rate of metribuzin,” Dr. Daniel Beran, Nufarm U.S. Director of Technical Services, told CropLife®.

“We can take some of the uncertainty out and build a burndown and residual program that has good flexibility, and if the trait changes or the in-crop application tools are limited or some application timings are changed, a good residual herbicide program ahead of that is going to make that transition much less difficult,” Beran said. He noted that it is an interesting time for Nufarm being more of a third party to the players in the dicamba and 2,4-D technology space — it enables company reps to help take retailers back to the basics.

Another new preplant burndown product is from Helm Agro US with the launch of Reviton, a PPO-inhibitor herbicide with the novel active ingredient Tergeo and labeled for field corn, cotton, soybeans, and wheat. In more than 700 North American product development trials and regulatory studies, Reviton demonstrated “extremely promising performance ratings in burndown control for more than 50 broadleaf and grass weeds, including ALS, triazine and glyphosate-resistant species.”

With the commodity price downturn, Copeland has seen both the good (increased cover crops) and the not so good (cutting herbicide rates).

“The inclusion of a residual herbicide in the post application is key to maintaining the residual weed control needed to get our crop-to-canopy closure,” he said, adding, “Furthermore, neglecting a residual herbicide at either one of those applications increases the seed returned to the soil seedbank and will ultimately result in more money spent on extra passes across the field in an attempt to clean up a mess.”

Copeland called attention to research by Purdue University, which found that overlapping residuals is the only way to reduce the seedbank in the first year of management. Viable waterhemp density in the seedbank skyrocketed with treatments that did not deploy overlapping residual herbicides with multiple sites of action, compared with a 34% decrease in waterhemp resulting from a long residual postemergence program utilizing overlapping post residuals (see graph below). 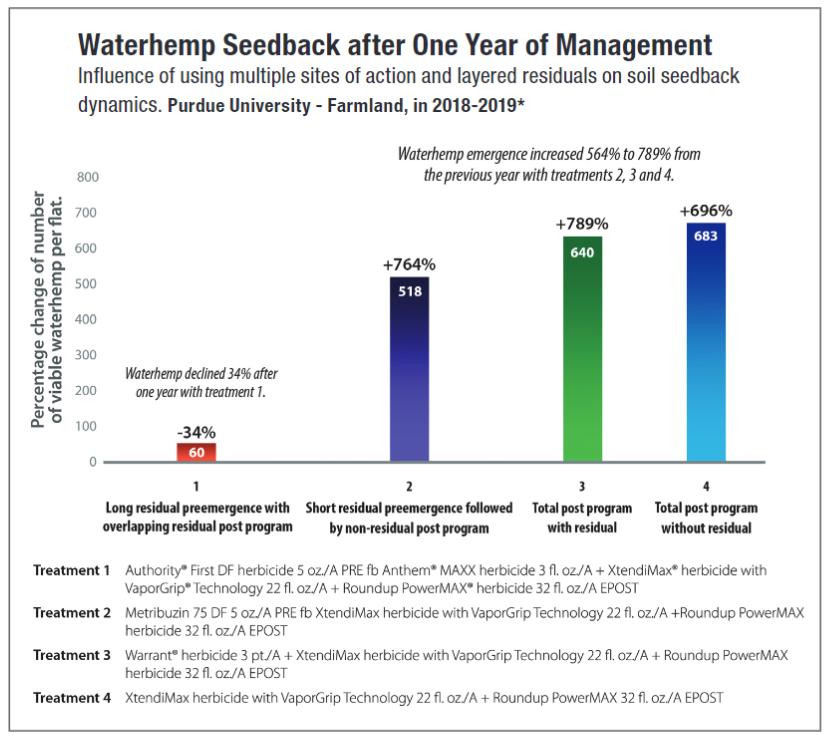 “It’s data like this that helps our retailers and agronomists when they go talk to a grower,” he said. “They can say, ‘I know times are tough, but something we don’t need to cut back on if we’re looking at a sustainable future on your farm is cutting residual herbicides, whether it’s at plant or over the top.’”

As Dr. Bob Hartzler explained in his Iowa State University Integrated Pest Management blog: “The current approach to weed management in Iowa is at risk due to rapid expansion of herbicide-resistant weeds. In order to preserve the efficacy of herbicides two things must happen: 1) adoption of integrated weed management; 2) shifting the goal of weed management from protecting crop yields to minimizing the size of the weed seedbank. The first requires a shift in behavior, and the second a change in attitude.”

In addition to costly skimping on preemergence residuals, Syngenta’s Bowers cautioned about “trading down” to generics in a bid to save cash.

Bowers described standard storage stability testing performed by Syngenta on generic products. If active ingredients have not been formulated correctly, the AIs can attack each other and degrade the available herbicide. When the grower applies the product in which only, say, 80% of the AI is working, he may not only encounter mixing issues, but he also may be applying at a below-labeled rate and getting less weed control than expected.

A specific example where there’s a tendency for folks to grab generic formulations, Bowers said, is combining S-metolachlor, the AI in Dual II Magnum, with mesotrione, the AI in Callisto, for which Syngenta has various corn premixes available such as Acuron. In a premix of mesotrione and S-metolachlor, “if you are unable to formulate the S-metolachlor correctly, it can degrade the mesotrione that’s available.”

Bowers added, “Spending a few more dollars upfront and tweaking your herbicide program to deliver better weed control resulting in more bushels per acre is a better decision to be working your way through. At a time of low commodity prices, producing more bushels is really your key. We’re not going to save our way to prosperity, so there’s that balance of being prudent on your spend, but yet making sure you’re getting the value and the return on the dollar that you did invest.”