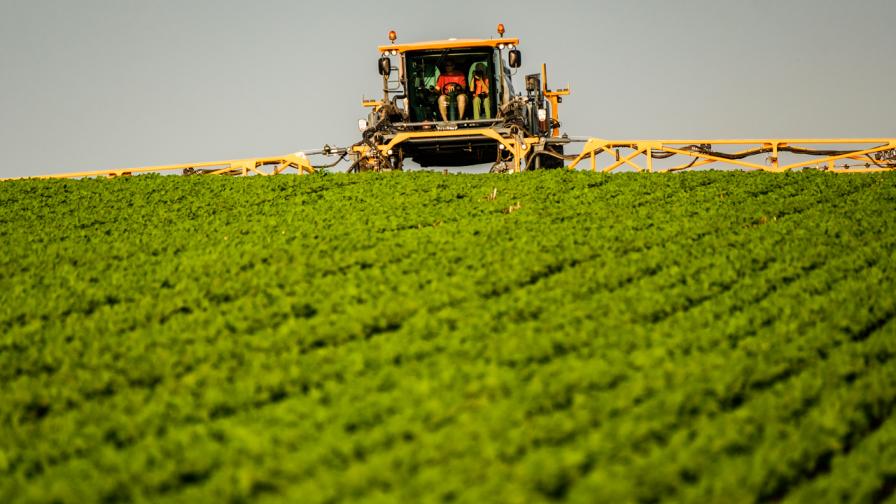 Growers and retailers are taking a hard look at ROI with new fungicide options heading into the 2020 crop year. Photo courtesy of BASF

When it comes time for the grower to make decisions on crop inputs for this season, the fungicide acre looms large.

“I think retailers also feel that same strain — trying to decide where it’s economically feasible and ensuring there’s some type of return on investment on that acre,” Matthew Wiggins, FMC Technical Service Manager, says. “Time after time, most of our high-end producers and high-yielding guys, they’re going to pull the trigger on a fungicide.”

First, one concern that everybody has been talking about: tar spot. First identified in Indiana and Illinois in 2015 by Dr. Kiersten Wise and colleagues at Purdue University, its spread became evident by 2018.

The severity of tar spot was significantly lower in 2019 for several reasons, according to a post by Dr. Nathan Kleczewski, Extension/Research Field Crop Pathologist with the University of Illinois. One of these was the disastrous late start to the season, which resulted in record prevent plant acres. Phyllachora maydis is an obligate pathogen, meaning that it needs a living host to grow and reproduce, as Kleczewski noted. “With fewer acres of corn planted, this means that there was less host material for the fungus to grow and multiply and, subsequently, less inoculum to cause disease.”

What does the 2019 tar spot situation mean for 2020 corn? “One cannot be certain, but we would expect less Phyllacora maydis inoculum to overwinter, simply due to fewer corn acres planted and less corn infection in 2019. This could result in lower inoculum loads and potential disease in 2020,” he wrote.

However, as Aaron Burke, Director of Sales, U.S. Central, Atticus, points out, many strobilurin fungicides have shown to provide plant health benefits that bump yield even in the absence of disease vs. the untreated acre.

In 2019 in his region in southern Wisconsin and Michigan, “growers who anticipated having high tar spot infestations ended up having low to no infestations. However, they saw a yield bump,” due to fungicide applications, Burke says.

Given this, as well as the generally consistent performance delivered by fungicides in recent years, he expects fungicide use will be equal to or greater than 2019, “especially if we get the crop in at any acceptable time frame. If we get the crop off to a decent start, growers are going to look at the opportunity they have and understand the return on investment that fungicides provide, and the expectation is that they will treat to maximize their yield potential.”

Iowa State University Extension and Outreach advises looking for tar spots on the ear leaf and above and to be careful not to confuse southern or common rust with tar spot. In most cases, however, the plant is infected long before symptoms are visible.

With a 14- to 40-day latent period, it’s crucial to get ahead of tar spot with a preventive fungicide, according to Dr. Eric Tedford, Fungicide Technical Product Lead at Syngenta.

When tar spot is left untreated, it negatively affects the plant’s ability to photosynthesize, causing leaves to brown and die early, which can result in reduced yield and ROI potential. While results vary by region, 2018 research from Syngenta found that 10% to 15% disease severity resulted in about 10 to 15 bushels per acre (bu/A) of corn lost. Severity does not generally get above 40% to 50% because the plant dies, but tar spot can easily cause yield losses up to 60 bu/A.

“For growers who are concerned about tar spot infection early in the season, I recommend two sprays of Trivapro at V4 to V8 timing and VT/R1,” Tedford says. “For those in a lower-risk area, one spray of Trivapro at VT/R1 can keep tar spot severity low.”

Following the success of its Lucento fungicide debut last season, FMC is readying the launch of a new at-plant in-furrow fungicide, Xyway 3D (AI: flutriafol), to be paired exclusively with its 3RIVE 3D foam delivery application system. FMC will conduct large-scale grower testing of Xyway 3D fungicide in corn in 2020 and anticipates a commercial launch in 2021. FMC is evaluating its application in other crops, and a liquid fertilizer-ready formulation of the fungicide is also in development.

“With Xyway 3D fungicide, we’ve seen systemic disease protection from planting all the way through black layer. It’s a very unique application technique in that you can put it out in-furrow and see disease control all season long,” Wiggins says. The product targets key corn diseases, such as northern corn leaf blight and gray leaf spot.

BASF’s newest fungicide, Revysol, gained EPA approval last summer and will debut this planting season. The active ingredient will be available in several fungicide products, including Veltyma in corn; Revytek in soybeans; Provysol in potatoes, sugar beets, and peanuts; and Cevya in grapes, almonds, pome, and stone fruit.

BASF touts Revysol as the first and only isopropanol azole of its kind in the market, “which can flex to control a broad spectrum of fungal diseases and strains resistant to demethylation inhibitors (DMI).” In recent BASF trials, it has shown exceptional biological performance against northern corn leaf blight in corn, cercospora leaf spot in sugarbeets, frogeye leaf spot in soybean, and powdery mildew in grapes.

Atticus expects strengthening demand in 2020 for its Talaris line of fungicides in soybean, driven by white mold issues experienced in the upper Midwest.

“White mold incidence has grown significantly. Growers have been building a treatment into their plan, and (Talaris) has gotten much more popular,” Burke says, adding that Atticus’ Acadia and Aquila XL azoxystrobin-based fungicide brands continue to be strong sellers for both corn and soybean.

Syngenta announced in the fall that its newest seed treatment, Saltro fungicide, received EPA registration and will be available for the 2020 season. Formulated to protect against Sudden Death Syndrome (SDS) and nematodes without causing plant stress, Saltro contains Adepidyn fungicide (AI: pydiflumetofen), which outperforms older chemistries and provides higher potential yield, according to the company.

“For the first time ever, growers will have a seed treatment option for protecting their soybeans against SDS and nematodes that doesn’t cause additional stress on the plant and enables soybeans to reach their full genetic potential,” Dale Ireland, Technical Product Lead for Syngenta Seedcare, says. “With Saltro, we’ve seen a statistically significant yield increase of 3 bu/A over the current standard in heavy SDS environments. It’s definitely an upgrade for SDS protection.”

Saltro also delivers activity across a broad spectrum of nematode species, including Soybean Cyst Nematode (SCN) — the No. 1 yield-robbing pest in soybeans and a major contributor to SDS infection.

“Severe SDS infection can cause up to 50% yield loss, and SCN has cost about $1.5 billion in U.S. yield loss,” Ireland says. “Since Saltro provides protection against both, it will complement SDS- and SCN-resistant varieties to help soybeans maximize their yield potential.”

0 1 5 How 2019 Impacts Fungicide Decisions This Season