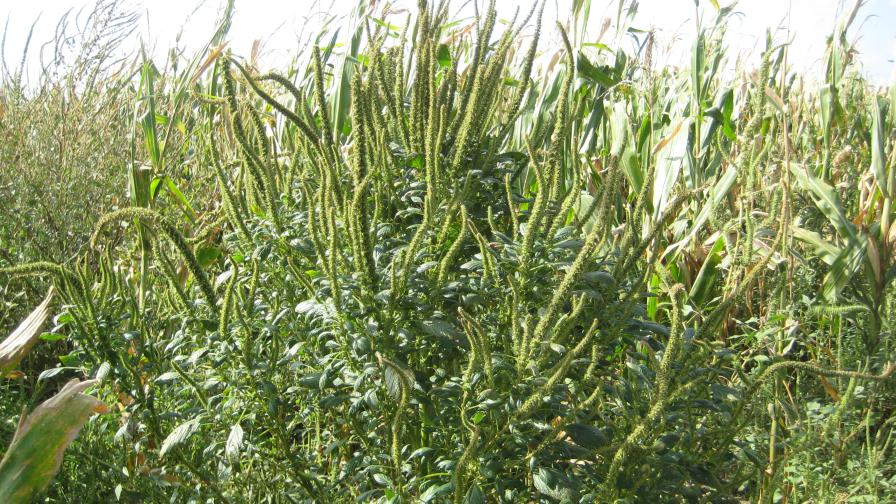 A single female plant of Palmer amaranth can produce 200,000 to 500,000 seeds depending on competition and growing conditions. Photo credit: Amit Jhala

For the past 25 years, many farmers across Nebraska have relied on the chemical glyphosate for weed control to have a successful crop harvest.

However, due a to a not-so-simple change in the genetic makeup of Palmer amaranth, a pesky weed found in soybean fields, that no longer works. In fact, six weeds in Nebraska have become resistant to glyphosate, including Palmer amaranth.

“Soybeans are the second most important crop grown in Nebraska,” says Jhala. “Not only is the crop important here, but it’s grown across the U.S.”

Some common weeds, such as palmer amaranth and waterhemp, have become resistant to the herbicides used to manage them. This is challenging for farmers, and it can decrease crop production in their fields.

Palmer amaranth is problematic because it can outcompete most crops, leading to high yield loss.

Historically, the chemical glyphosate has been used to control the weed in glyphosate-resistant cropping systems. The crops in these systems, often corn and soybeans, are resistant to glyphosate. This means it doesn’t affect crop performance, but it kills the weeds.

Management of Palmer amaranth is challenging and cannot be controlled by just one chemical. Herbicides work in various ways, called sites of action. The team recommends using a herbicide with a mixture of chemicals that can work in multiple sites of action.

One option farmers have is to apply pre-emergence herbicide, which is applied on soil after crop planting.

Depending on weed growth in the field after the soybeans emerge, another spraying should be done to kill the weed species.

“The main objective of our study was to determine the critical time of Palmer amaranth removal in soybeans and how it is affected by pre-emergence herbicide,” says Jhala.

“The weeds compete with the crop for nutrients, moisture, space, and light. If they outcompete, there is large yield loss,” he explains. “We need to know the best time to remove the weeds to avoid yield loss in soybeans.”

The team then compared timing of Palmer amaranth removal at different soybean growth stages to determine the best management practices.

Results indicate that using a pre-emergence herbicide with three active ingredients applied at soybean planting was the most effective.

“When Palmer amaranth is common in a field, farmers should consider using herbicide with multiple sites of action,” says Jhala.

“If farmers don’t use any chemical in a pre-emergent application, the field can be overrun with Palmer amaranth and they will see a high yield reduction,” he explains.

Amit Jhala is an associate professor and extension weed management specialist at the University of Nebraska-Lincoln. This work was supported by Nebraska Soybean Board and USDA-NIFA.

The American Society of Agronomy is a scientific and professional society of agronomists and scientists of related disciplines. See all author stories here.