Limited new chemistries, increasing pest resistance, and resurging corn rootworm pressure were just a few factors that made 2020 a demanding year for insect management, and these will likely continue in 2021.

As growers and retailers deal with these challenges, Sam Knott, Director, Central U.S. Crops with Atticus LLC, has observed they are taking less of a reactionary response and more of a planned approach to both traits and a second insecticide.

“When you can layer traits and chemistry together that gives the grower more of a bulletproof program going into 2021,” Knott said, adding that he has seen increased use of in-furrow insecticides to prevent secondary pests like wireworms and grubs.

“I think education at the grower level is at an all-time high. Many progressive growers understand the active ingredients or combination of AIs better than they ever have before. They’re looking for a quality product from a reliable supplier that is priced to meet their needs better, and that’s where generic plays can really meet their needs, along with the retailer’s needs to differentiate and offer a quality product.”

As growers scrutinize their inputs, Nick Fassler, BASF Technical Marketing Group Manager, encouraged all-hands-on-deck scouting for pest populations to determine if economic thresholds are met. For aphids, for example, that would be an average of 250 aphids per plant with more than 80% of plants infested.

“If you’re scouting on a regular basis and populations are flat, maintaining, or going down, it may not justify an application,” he said. “But if you have (met the economic threshold,) you’re looking at potential yield loss. We don’t have as much of a ‘throw everything at it’ mentality nowadays, but it’s really assessing what’s going to protect yield potential. Those extra scouting trips can really pay off.”

Among the new insecticide product launches for 2021 is Renestra from BASF, a premix of Fastac, a pyrethroid, and its novel Sefina Inscalis active ingredient, effective on aphids. The combo gives growers a solution for controlling a wide range of insect pests and soybean aphids that have developed resistance to traditional chemistries, Fassler said. The product is geared toward growers the Upper Midwest, where solutions are needed for both soybean aphids and Japanese beetles and other chewing pests.

Trading down on traits, especially for growers in corn-on-corn situations, has escalated in the last couple of years, in large part due to the perception that corn rootworm has declined as a threat. But rising corn rootworm pressure in 2020 may have growers and retailers re-thinking their plan for next year. 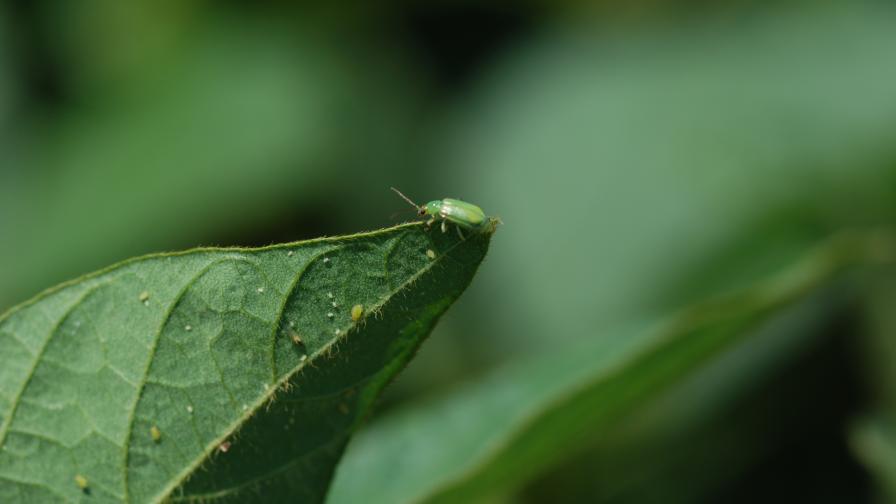 “It’s a double whammy for growers trading down from pyramids to single-mode-of- action traits, then this big uptick in pressure (caused) a lot of damage. I think 2020 will go down as a year where there is a lot more awareness for lodged corn, root pruning, yield loss, and harvest challenges,” Meade McDonald, North American Product Marketing Lead, Insecticides, Syngenta, told CropLife® magazine.

Of the four commercial traits available today for protecting against below-ground corn rootworm, all four have developed field-level resistance. Around 70% of corn planted has only one below-ground trait, upping the pressure on that trait, noted Jim Lappin, AMVAC Director of SIMPAS Portfolio and Alliances.

“It doesn’t mean they fail every time, but it means there is a growing concern around the traits performing as well as they used to,” Lappin said.

BASF’s Fassler urged growers to proceed with caution when considering trading down, as there is little remediation that can be done in-crop once root damage has started.

“Talking to your local agronomist and seed partners would be the best route to understand what pest pressure has been present and what kind of inherent populations there are in your corn-soybean rotations to justify where you need to place the trait, versus where you can trade down a bit,” Fassler advised. “Lodged corn is not a fun thing — it’s not something we would want anyone experiencing. Make sure you’re aware of the trade-offs before you commit to that choice (to trade down).”

“The best thing you could do with a cornfield that had elevated damage from corn rootworm in 2020 would be to rotate it to soybean in 2021,” Dr. Nick Seiter, Field Crop Entomologist at the University of Illinois advised, noting that while crop rotation will not eliminate the potentially resistant beetles that emerged from the field — especially in areas where rotation resistance is an issue — any larvae that do hatch into a soybean field next spring will die. “The worst thing you could do from a resistance-management standpoint would be to plant continuous corn with the same trait package after observing unexpected damage in a field the previous year.”

Seiter explained that measuring rootworm damage in a field is critical to assess whether a resident rootworm population might be resistant to a particular Bt trait package. For reference, a rating of 0.5 (one half of one node pruned) is considered unexpected damage to a pyramided Bt corn plant and could be evidence of resistance. Remember to account for the blended refuge plants, he added.

“I can’t just rely on Bt traits alone anymore to cover my needs; I’m going to have to think about entire insect dynamics I need to manage,” Stratman said, such as incorporating a spray program to knock back adult rootworm beetles and manage the egg-laying populations. “That sort of approach is being discussed on a much broader scale now,” he said. “We’re seeing issues with corn rootworm all the way from the high plains of Kansas and Nebraska to areas of Iowa, Illinois, Minnesota, and further east.”

From FMC, Ethos XB (AI: bifenthrin + Bacillus Amyloliquefaciens strain D747) and Capture LFR (AI: bifenthrin) are a couple of its in-furrow insecticide offerings. Stratman mentioned its Steward EC insecticide as an up-and-comer because of its effectiveness against adult corn rootworm beetles and many Lepidopteran pests while having minimal impact on beneficial insects.

New insecticide launches from FMC include Vantacor, which is a highly concentrated formulation of Rynaxypyr. Another is Elevest, also powered by Rynaxypyr but adds a full rate of bifenthrin to the formulation. Elevest provides enhanced activity on select Lepidopteran pests and a broad spectrum of more than 40 insects, including stink bugs and plant bugs that plague southern row crops.

Grower profitability determines the annual crop mix in many areas. As corn prices have been on the rise more recently, Stratman said growers are likely to see an uptick in those insects that favor corn with a continued increase in corn-on-corn acreage. “That’s probably the take-home message as you go forward in 2021. Think back to what you saw in the previous two years and notice how the trends are affecting your farm and make your management decisions accordingly.”

For Andrew Schmidt, Agronomist with WinField United, cutworms and silk clipping insects like the Japanese beetle and corn rootworm beetle pose the biggest threat in his region of Missouri and eastern Kansas. With few corn-on-corn acres in Missouri, rootworm issues are not as pervasive. Pod feeders, especially stink bugs, have been particularly problematic in soybeans over the past two to three years and as such, his team has stressed scouting during critical growth stages and podfill.

From WinField United, Tundra Supreme is one of the key products Schmidt recommends for its dual modes of action (AIs: bifenthrin + chlorpyrifos) and protection against and residual control of insects like Japanese beetles, stink bugs, bean leaf beetles, spider mites, and many corn and soybean insects.

“A lot of these insects we are spraying are R3 to R4 soybeans in a dense canopy. MasterLock, with its surfactant and deposition aid, helps us get that insecticide down into the canopy. No matter what insecticide we’re running with, we recommend it in that application to help control that insect and have a better return on investment.”

Increased corn rootworm pressure on corn crops throughout the Central and Northwest Midwest in 2020 suggests there will be a need for more application of corn soil insecticides in 2021, according to an extensive survey of agricultural retailers conducted in September by AMVAC.

Ag retailers, surveyed both online and in phone interviews, compared 2020’s rootworm pressure to that of 2012, after which use of soil-applied insecticides was elevated for three seasons, from 2013 to 2015.

An increase in weed escapes in the 2020 season provides more food sources and habitat for egg-laying sites.

“Your weed control this year makes a difference to your insect pressure next year,” Lappin pointed out. In combination with factors such as higher corn prices, the prediction of a colder winter that could boost survival of eggs, and increased Bt trait resistance, underlined the potential for more corn insecticide use next season.

“The threshold to treat corn with corn rootworm is an average of one female beetle per plant. Assuming 32,000 plants per acre, even if only 5% of those beetles lay eggs and those eggs survive, you’re still talking about thousands per acre,” Lappin said.

AMVAC’s corn soil insecticides include Aztec, its leading corn rootworm brand and Index, its liquid alternative to granular products for corn rootworm, along with Force 10G, Counter 20G, and SmartChoice HC — all of which can be used with SmartBox+ and in SmartCartridges with the SIMPAS Closed Application System, which has a full-market rollout for corn in 2021.

“A lot of growers are finding they want to dial in the level of control they feel they need to get the best crop,” said Nathaniel Quinn, AMVAC Marketing Manager for Corn, Soybeans and Sugar Beets. “Having the ability to select across a multitude of soil insecticides, across different ways to apply the insecticides is going to be beneficial, and AMVAC offers these options. As we think about prescriptive application, SIMPAS enables the grower to deliver the best combination of traits, insecticides, and other products to provide the desired level of control needed in the effort to reach yield potential.” He added, “There’s more work to do, but the technologies we’re bringing forth are enabling that kind of progress.”