Despite the Trump Administration’s relaxing of regulatory positions on pesticides — notably the EPA decision over the summer to keep chlorpyrifos — the longer-term trend embraced by many U.S. state lawmakers to phase out certain chemicals, one by one, abides.

Hawaii became the first state to institute a blanket ban on the manufacturing, sale, and use of pesticides containing chlorpyrifos by 2023, although restrictions began last January.

New York then passed legislation last May that would ban chlorpyrifos from the Empire State by the end of 2021. Similar legislation had entered into the fray in Maryland earlier in 2019 but failed to pass. Oregon, Connecticut, and New Jersey all have or had bills under consideration to banish one of the country’s most widely used crop protection products.

“While chlorpyrifos hasn’t been universally banned, I think some people are wondering what its future looks like. It’s a class of compounds, the organophosphates, that we tend to be moving away from. That’s been a trend over the last 20 years, and I think we’re seeing that trend continuing,” Dr. Kelley Tilmon, Associate Professor with The Ohio State University, told CropLife® magazine.

Far and away the biggest blow to chlorpyrifos came in the fall, when the California EPA announced that virtually all use of the broad-spectrum insecticide in the largest agricultural state in the nation will end in 2020 following an agreement between the Department of Pesticide Regulation (DPR) and pesticide manufacturers to withdraw their products.

“The swift end to the sale of chlorpyrifos protects vulnerable communities by taking a harmful pesticide off the market,” California Secretary for Environmental Pro-tection Jared Blumenfeld said, citing mounting evidence that it is associated with serious health effects in children and other sensitive populations at lower levels of expo-sure than previously understood, including impaired brain and neuro-logical development.

“It’s a losing battle,” Paul Squires, an independent Agricultural Pest Control Adviser (PCA) in Yuba City, CA, said of any notion that the product may regain the lost registration in the state. While he remains unaffected as a PCA for rice growers, the ban will impact a “few crops and a few insects in a big way” — namely walnut, grape, citrus, and cotton growers.

“My biggest concern is that (the chlorpyrifos ban) is just a stepping stone,” to more restrictions on necessary, responsibly applied pest management tools, Squires said.

Unless, that is, the agricultural industry starts putting in the work to foster better understanding that can finally help change the way crop protection products are perceived, he said. “We should focus our efforts on creating relationships and transparent communication with individuals who don’t really understand what we do on a daily basis, to facilitate long-term solutions,” he said. “We can learn from them and replace the emotion that is threatening the products that we need to produce food.”

Squires is set on taking to several California industry associations the idea that a brighter future for ag — one that accepts pesticides as critically important tools — starts at the grassroots level. Through the associations, his intent is to establish regular meetings with farm workers and the general public in a bid to step up educational efforts on integrated pest management, science, and safety. Farm workers are the very people environmental justice groups say are overlooked most yet have the greatest need for the information.

Squires is also a member of the Chlorpyrifos Alternatives Work Group, which DPR and the California Department of Food and Agriculture (CFDA) established to identify, evaluate, and recommend “safer, more sustainable pest management alternatives” to chlorpyrifos.

Preliminary results of the group’s discussions remain confidential until the first of three public workshops are held beginning Jan. 14.

While Squires said he was impressed by contributing members of the group representing CDFA, DPR, and the California Agricultural Commissioners, he was critical of the use of the word “alternatives” in the group’s title.

“As a PCA, as a grower, ‘alternatives’ are not solutions. Unless definitions change, we have to understand that providing suggested alternatives doesn’t mean they will work in practice,” he explained. “When I write a recommendation, if a product doesn’t perform, I have liability. I have a license. If a farmer’s crop is damaged because the choices we have left are not effective, their livelihood is at stake.”

In response to the California ban, Corteva Agriscience spokesperson Kacey Birchmier told CropLife that the company — the top maker of chlorpyrifos (trade name Lorsban) — stands by the pesticide’s safe use according to product labeling, “and we strongly disagree with the contents of the Accusation that the State of California issued to registrants, which are not supported by an objective, rigorous review of the science.”

Birchmier noted that California’s new, novel regulatory requirements have made it virtually impossible for growers to use the tool in their state, and that the outlook for use of the product in California does not warrant the resources required to mount a challenge.

Under the settlement, companies agreed that:

Dr. Erin Hodgson, Associate Professor and Extension Entomologist with Iowa State University, posited that states with more diverse cropping systems, such as Minnesota, could potentially follow suit on the recent action in California.

Already, in 2012, the Minnesota Department of Agriculture (MDA) determined chlorpyrifos to be a “surface water pesticide of concern,” due to frequency and magnitude of detections of the insecticide in surface waters of Minnesota. Consequently, MDA developed best management practices for use of chlorpyrifos. According to MDA in 2018, “if the voluntary best management practices are proven ineffective, mandatory restrictions on chlorpyrifos use and practices may be required.” 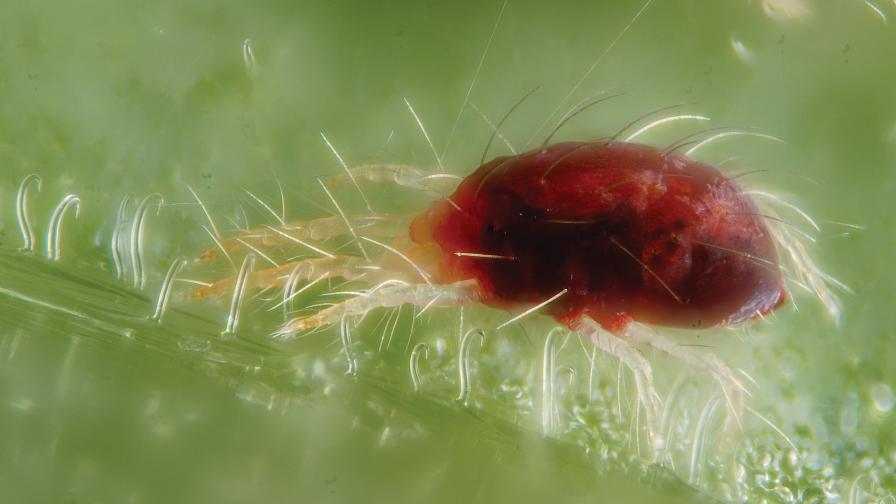 For corn and soybean growers who use Lorsban to control spider mites (above), the consequences of a ban would be more severe. Photo by Gilles San Martin via Flickr.

For corn and soybean growers who use Lorsban to control spider mites, the consequences of a ban would be more severe, as they have fewer affordable alternatives than specialty crop growers have overall — especially in this crop price environment. Over-reliance on cheaper pyrethroids, for example, would increase resistance pressure multifold, Hodgson explained.

There is a secondary wrinkle that has occurred in Minnesota (and other states) in the last few years. Soybean aphids — a perennial problem in the state — have developed resistance to pyrethroids, said Dr. Ken Ostlie, University of Minnesota Professor and Extension Entomologist.

“In that context, the importance of chlorpyrifos has increased as an option for application to resistant soybean aphid populations,” Ostlie told CropLife. “Alternate products take longer to exert control, so your management approach has to change. One of the challenges we face with the current economic situation is that it tends to work against investing a lot of effort in scouting. Sometimes these infestations are detected later than farmers would like, and they’re looking for a quick rescue.”

Tilmon, in Ohio, said she has been pleased with the performance of some newer miticides that target and kill eggs and immature spider mites, stopping population growth in its tracks, vs. other products that kill only the adults.

Reliable alternatives to chlorpyrifos, she noted, include Zeal (etoxazole) from Valent, which is labeled for corn and soybean and targets eggs and immatures of spider mites, as well as Agri-Mek (abamectin) from Syngenta, which is labeled for soybean and targets mite eggs. Products containing older chemistries, like bifenthrin (a pyrethroid) or dimethoate (an organophosphate), are also options for spider mite control in corn and soybean. Tilmon observed that rotating among different classes of pesticide is a very useful tool to combat the development of resistance.

In California, the end of chlorpyrifos “will profoundly impact” alfalfa integrated pest management and pest resistance, according to a blog by Rachel Freeman, Daniel Putnam, and Ian Grettenberger of the University of California Cooperative Extension.

“Unfortunately, alfalfa weevils frequently reach economic damaging thresholds in California, and many growers find it necessary to spray. There are some aphid-specific insecticides (other than chlorpyrifos) that would help with aphids but not with alfalfa weevil,” the authors stated: “Weevil resistance to pyrethroids is beginning to be a problem throughout the western states, including select areas in California, such as the Intermountain and Low Desert production areas. With the loss of chlorpyrifos, the overuse of a single class of insecticide could be a major challenge.”