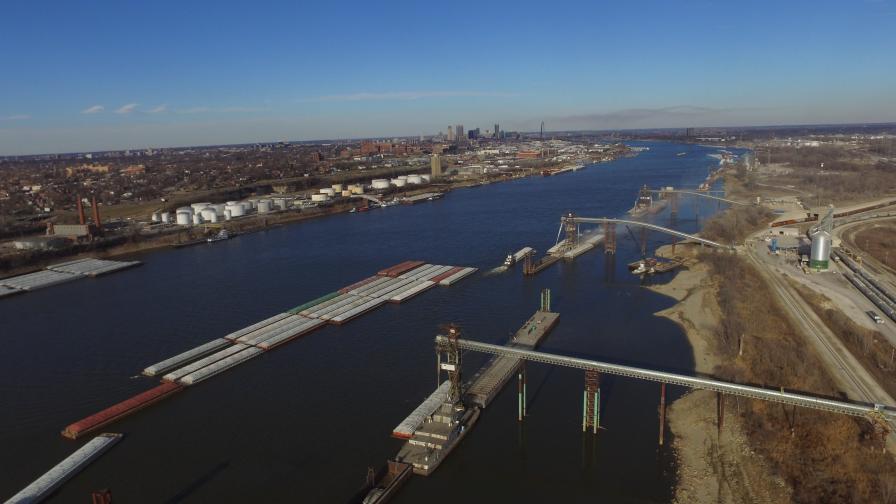 Activity at the new Bruce Oakley Terminal in Cahokia, IL.

The St. Louis region’s position as the most efficient inland port in the U.S. has been strengthened following the recent addition of a new grain handling terminal on the banks of the Mississippi River in Cahokia, IL, adding additional capacity in the area known as the Ag Coast of America. The region garnered the title due to a 15-mile stretch of the Mississippi River featuring 15 barge-transfer facilities that, at total capacity, can handle 150 barges a day – the highest level of capacity anywhere along the Mississippi River. The addition of the 16th terminal, which was built by American Milling and purchased in December 2020 by Oakley St. Louis, LLC, a subsidiary of Arkansas-based Bruce Oakley, Inc., further expands the existing capacity with the ability to handle at least 1,000 more truckloads of grain daily.

Bruce Oakley entered the market in 2019 with its purchase of Lange-Stegmann Company, and this is its second terminal in the area. The acquisition gave Bruce Oakley control of Lange-Stegmann’s 60-acre site at Mile 182.7 on the Upper Mississippi River, which includes a barge dock, a rail yard with 23,000 feet of track, three locomotives, a truck and rail scale, and more than 153,000 tons of storage capacity.

“Bruce Oakley, Inc. is very excited to have a presence in the St. Louis area,” said Justin Oakley, Vice President of Bruce Oakley, Inc. “For a commodity transportation and distribution company like Oakley, St. Louis is one of the most strategic locations on the river system. No other city connects river, rail, and road quite like the Ag Coast of America. Deep barge drafts, the lock-free and ice-free river to New Orleans, connection to the Class-1 railroads, and proximity to many industrial accounts that Oakley also services, make the Ag Coast a perfect location for us. Having the largest and most efficient fertilizer terminal in the area, complemented by a high-speed grain loading terminal, makes Oakley uniquely suited to add value to customers throughout the region.”

Other facilities on the Ag Coast include the Cargill Grain Elevator, which is one of the busiest grain elevators in the nation; the Bunge-SCF River Grain Terminal in Fairmont City, Illinois, which is designed for more than a million bushels of permanent storage and can handle high volumes of multiple commodities simultaneously; and four facilities in Cahokia, Illinois, operated by Consolidated Grain and Barge Company (CGB), Louis Dreyfus and COFCO International Growmark, which are the four highest capacity facilities in the entire inland waterway. Facilities operated by ADM, Gavilon Fertilizer, SCF, and Italgrani Elevator Company, along with America’s Central Port and the Municipal River Terminal in St. Louis, round out the 16 barge transfer facilities currently handling the tremendous volumes of agriculture and fertilizer products flowing through the Ag Coast.

Growth on the Ag Coast is also supported by the recently completed reconstruction of Cargill Elevator Road, a vital link to Cargill’s Mississippi River grain terminal. Trucks represent 87 percent of the vehicles traversing the narrow roadway, and prior to the reconstruction, traffic had been limited to one lane in each direction. Federal funding of $800,000 through the IDOT Competitive Freight Program was key to advancing the $3.3 million project, which also received state and private funds.

“IDOT is proud to be working closely with our local stakeholders and businesses to improve the efficient transport of freight through our region,” said Keith Roberts, the Acting Region Five Engineer for the Illinois Department of Transportation. “The recent Cargill Elevator Road improvements complement future planned work by the department, including the extension of relocated IL Route 3 south into Sauget and additional projects to improve reliability of the freight and commuter network along this vital regional corridor.”

One additional project, now partially funded, will help to address heavy traffic volumes on Illinois Route 3 at the A&S railroad crossing in Sauget, which result in more than 55,000 hours of through-traffic delays annually. Calculating the cost of delay, a proposed grade separation project would provide annual cost savings of $1.5 million for passenger and commercial vehicle drivers traveling this area and improve truck traffic reliability, safety and efficiency benefiting barge and rail rates. The overall project has multiple benefits to the region in terms of improving access to the growing business community and encouraging future business development.

Mary Lamie, Vice President of Multi Modal Enterprises for Bi-State Development and head of the St. Louis Regional Freightway enterprise, is excited about the continued investment in the Ag Coast and the infrastructure surrounding it.

“Handling nearly 450,000 tons per mile, the St. Louis region’s port system is almost two and a half times more efficient on its river usage than its closest competitor, according to the most recent rankings by the U.S. Army Corps of Engineers,” said Lamie. “The added capacity and enhanced access provided by the newest terminal and infrastructure investments will come in handy given projections that 2021 will be a record year for corn and soybean exports from the United States.”