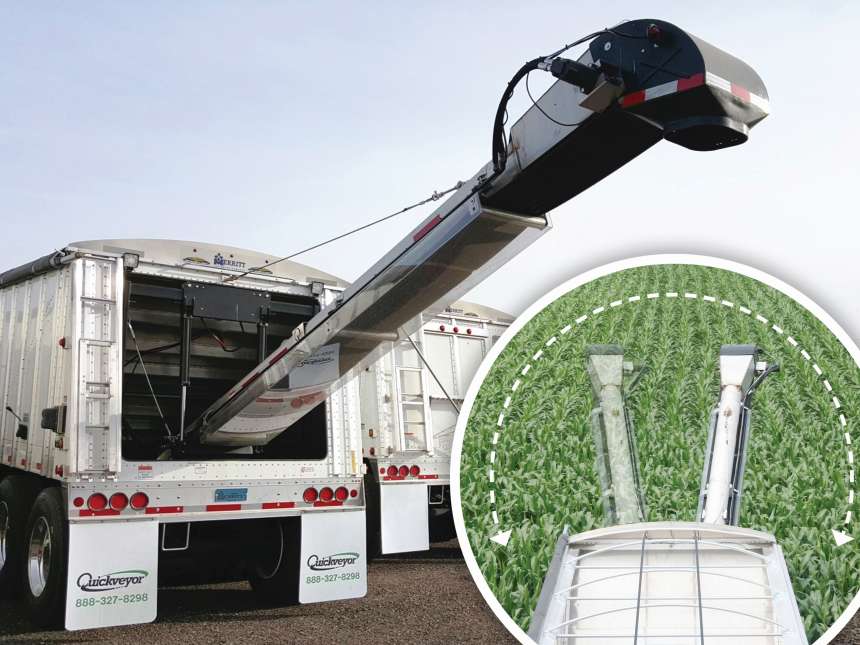 As fertilizer application seasons seem to be getting shorter and more intense, equipment manufacturers are designing tenders to not only move the most product efficiently but make the process easier on operators as well.

Indeed, “the need for more throughput capacity from the applicators is driving the need for more tender productivity whether it is in total unloading time or tender capacity,” says Jon Simonsen, president of Simonsen Industries.

Efficiency was a goal for the designers of the latest model of the Quickveyor, from Peterson Motors. Shannon Kruse, general manager, says the unit can improve users’ bottom line by delivering the largest payload to the field and offloading fertilizer at over 6,000 pounds per minute, Plus, buyers can convert the Quickveyor to a grain hauling hopper system in less than 60 minutes.

Manufacturers reported that overall capacity is still a major factor in tender choice. In fact, Bob Eakins, vice-president of Ray-Man Inc., noted that his company is selling more large truck-mounted tenders and semi-trailers than in previous years.

But Hays-LTI’s line of smaller units is moving as well. And Simonsen said his team is seeing customers becoming more interested in “right sizing” their new equipment to fit their operations as well. “While lots of capacity is nice, having equipment that is sized appropriately is becoming more prevalent,” he reports.

Besides moving lots of fertilizer fast, companies are also addressing the needs of field operators. For example, the Adams Safety port was the number one selling feature in Adams Fertilizer Equipment’s tender market in 2015, reports Shawn Hudspeth. The port gives operators the ability to inspect and probe product from the ground and keep them off the ladder. It’s now standard on all new 2016 Adams trailers.

Remote control of tender functions is a great way to help drivers, and the concept is catching on. For instance, Adams’ newest technology can control tenders by cell phone or smart pad — or manually, as always, says Hudspeth.

KBH Equipment is in the second year of the launch of its wireless remote system. The technology controls every function of the tender from engine cranking to auger movement to turning the engine off, explains Tim Tehnet, national sales and marketing manager. The system eliminates the need for applicators to climb up and down cab platforms to tend to auger and bin placement. “It saves on driver fatigue and gets the job done faster,” Tenhet says.

KBH is using hardware from the heavy lifting industry in its wireless systems. “It’s tried and true,” says Tenhet. “In the crane industry you can’t use hardware that doesn’t function right. When you’ve got 20 tons of concrete going up a skyscraper, there’s no room for error.”

Remote controls have been incorporated into almost every operational aspect of the Quickveyor’s systems, says Kruse. “It is now possible to remotely manage the tarp, compartment traps, rear LED floods and the side-to-side location of the rear tube (the ‘Swinger’),” he describes. And more remote control functions are in the works for 2016.

In fact, the Swinger was a big hit at last summer’s shows, he says. This option allows the user to remotely adjust the rear tube conveyor side-to-side for flexible delivery into multiple compartments, or filling a large compartment end-to-end, or simply to refine the drop point without moving vehicles.

Steel has always been the metal of choice for tender box components, but KBH is now the first company to use aluminum to make hopper frames. “Customers have told us they want lighter tenders to achieve a higher legal payload — as well as a more durable metal to hold up against the corrosive nature of fertilizer. Aluminum gives us both of those,” says Tenhet.

For a long time, aluminum has been deemed too pricey to be used in tender construction, but Tenhet says that when his team did their homework, they were pleasantly surprised at the affordability. Hence, aluminum frames are available now “at only a slight increase in price” on new KBH units.

Peterson Motors put together a product improvement team with Merritt to make several significant upgrades to the corrosion resistance of its aluminum and stainless steel Quickveyor. “We have gotten input from customers on the need to provide more lighting,” says Kruse. “So, we are now including under carriage LED lighting in the base model, as well as offering internal and rear flood LED lighting options.”

Another company with a different approach to moving product itselve has been Norwood Sales Inc. The firm offers stainless steel tenders that feature belt conveyors instead of augers. The reason?  “We’re marketing these tenders to end users with multiple uses in mind,” says Nate Larson, manager. “With a belt conveyor you have the delicate handling for seed as well as the capability to handle the fertilizer.”

Looking to the year ahead, InterSystems/AGCO “will be very aggressive in rolling out new features in its Willmar line,” says Nate Reznechek, crop nutrient equipment sales manager. In fact, in 2015 AGCO moved the manufacture of the line from Sioux City, IA, to Omaha, NE — under the InterSystems/GSI brand. “We have units rolling off the floor now, with both tenders and spreaders being delivered,” he says.

InterSystems just added a full-time product engineer to its team, to help carry on Willmar’s reputation for quality. “Willmar has been for years and will continue to be the standard,” says Reznechek.

In reflecting on the tender market, KBH’s Tenhet admits the ag economy has been experiencing very trying times, but he is hopeful that the downturn will not last past 2016 – and there will be a rebound in commodity prices in 2017. At presstime, he was more positive than even in just September. “We have enough sales activity going into 2016 that we’re going to be on solid ground through the first half of 2016 anyway,” he notes.

Peterson Motors is finding much the same scenario. Significantly lower commodity prices than in the recent past and  capital and input costs at historic high levels have affected everyone’s purchase decisions through the fall, says Kruse. “However, a large harvest and optimism for the next year — supported by falling fertilizer prices — has made a positive impact on tender purchases through the fall,” he says.

Simonsen was upbeat as well and noted that continuing consolidation and new plant construction drove tender sales in great part in 2015. He does offer a qualifier: “Some of our customers seem to be cautious about spending levels. Some have opted to continue utilizing existing equipment for another season instead of replacing it.”

Digital Engagement for Ag Retailers Focuses on the Basics