Over the past year, the customer has become the real winner because manufacturers are building tenders so competitively, says Ronald Hays, Owner of Hays-LTI. “Companies are continuously making safety and performance improvements to provide the highest quality equipment,” he says.

The level of innovation is striking. In 2017, several manufacturers either introduced brand new or entirely redesigned tenders — or made major upgrades in existing units.

The recent flurry of activity in this equipment segment comes at a time when many feel the tender market is looking up. For one thing, manufacturers agreed that dry versus liquid fertilizer applications are increasing, in great part because of the lower cost of dry product in these tight economic times.

Yields have been huge the past few years, so companies say plenty of fertilizer is needed on farms. Bob Eakins, Vice President of Ray-Man, saw lots of corn and beans this past fall, and “it’s going to take a lot of fertilizer to replenish all that. It’s good. They’re going to need to haul a lot of fertilizer back to the field,” he says.

Also contributing to the “go bigger” trend is the continuing mergers of cooperatives. “As they merge, their territory to cover increases, which increases the need for the larger units with quick turnaround from plant to field to supply the demand, points out Derek Wegner, Operational Research Analyst at Brehmer Manufacturing.

The tender market is also stronger because many crop advisors are recommending split applying nitrogen and getting it applied as late in the growing season as possible, says Greg Haffley, Product Manager with Ag Systems. Hence, the need for equipment to spread encapsulated urea in taller corn — and the need for tenders to supply product to high clearance applicators.

“Even though anhydrous ammonia is still popular in many areas, it’s coming under increased scrutiny on the timing of the application,” he adds. “Some locations are even getting out of the anhydrous business completely for this reason.” Then too, applying a 28% solution of nitrogen in the spring is somewhat limited due to the fact that the applicators are limited in height.

A lot of the dry spreaders have gotten higher off the ground, says Denny Stahl, Regional Sales Manager at Norwood Sales. Producers are topdressing corn, cotton and peanuts because they feel there’s a better penetration into the soils with the dry than with the liquid.

Though demand for tenders remains strong, Jon Simonsen, General Manager of Simonsen Industries, is hearing from some customers that their budgets are being reviewed and in some cases, reduced, causing tender purchases to be reduced or delayed. “But these issues are not new to the fertilizer equipment industry and are to be expected periodically in an industry as cyclical as ag,” he noted. 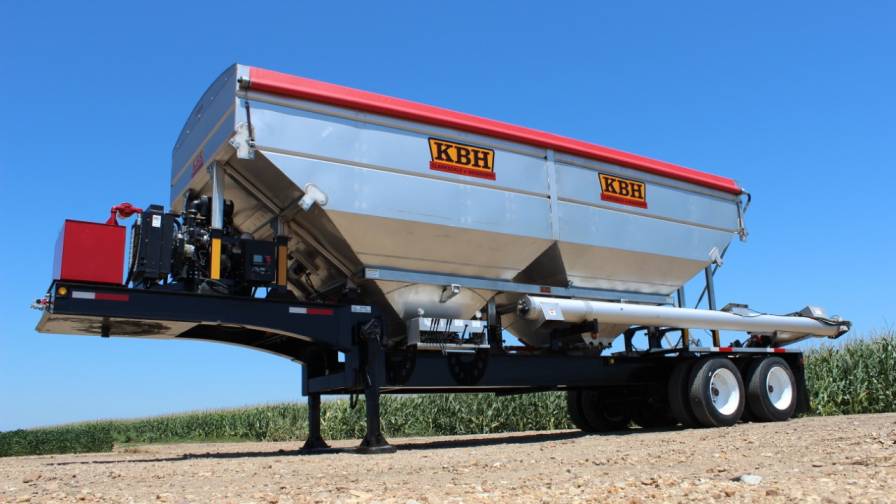 “We heard our customers saying that they wanted a lighter trailer, so we took close to a ton off of it. We added about 10% hopper capacity, replaced our old mild steel hopper frame with a stainless hopper frame, and steepened the hopper slopes for better product flow,” he describes. The units feature a number of more subtle changes as well.

KBH has also developed an all-new 3 compartment tender, the Model TT3000 series, and improved a number of features on its four-compartment Model TT4000.

Since June the company has been rolling its new dry tenders by as many dealers as possible, to the tune of several hundred fertilizer stores in the South, Southeast and Eastern Corn Belt so far, says Tenhet. “We’ve really hit a home run on this thing. Customers are saying why didn’t we do this a long time ago?”

Simonsen has introduced 304 stainless steel side and top auger tenders as well as made several upgrades in both its 304 and 409 tender lines. “We are seeing very positive responses from our customers,” says Jon Simonsen. 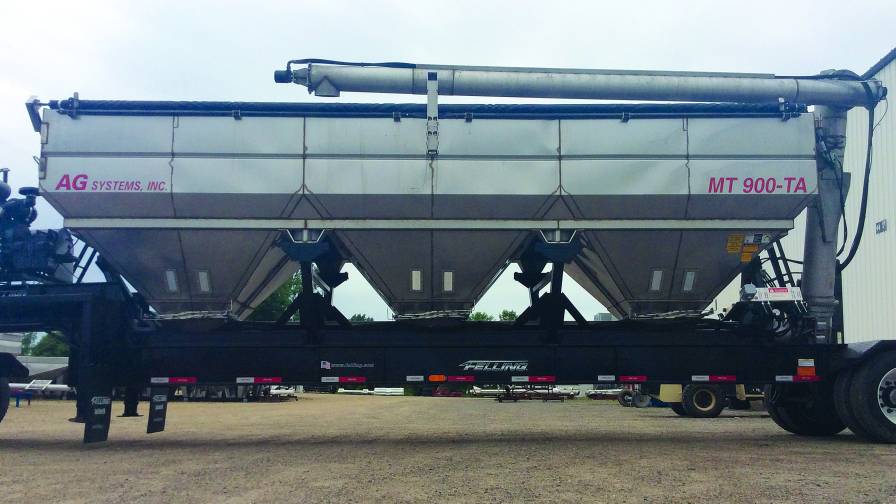 Ag Systems’ new MT 900-TA tender hit the market “with great reviews” in 2017, says Haffley. Made of 304 stainless steel with 900 cubic foot capacity, the unit is unique for two reasons. “It’s designed with 50-degree sloped sides, which not only speeds up unloading but helps to speed up clean-out as well,” he says. “The other reason is safety — the MT 900-TA doesn’t have a catwalk on the outside. Instead, there are windows built into the unit that allow users to monitor their loads from ground level.”

Another unique feature: Its auger. The auger can move 270 degrees, allowing for loading the floater in the center rather than on the inner side of the box. This means the MT 900-TA has an auger clearance range of 15 to 23 feet, which allows it to easily unload into all floaters — which continue to get taller.

From Norwood Sales, the new four-compartment SST 933 Uni-Body Stainless Steel Trailer is constructed of 304 stainless steel, allowing for lighter trailer weights and higher payloads. The “top grade” stainless and uni-body design mean there is no metal under the unit to degrade from the fertilizer and harsh materials put in tenders, says Stahl.

He also claims the unit puts out product about two times faster than other units on the market. “The guys that are buying them are telling me that when they get to the ports and unload, they’re doing it in half the time it used to take. Time is important to them.”

Norwood also offers the SST 1166, which has five compartments. And the company does build trailer-mounted units for buyers that don’t need the “splashy stainless steel and aluminum wheels,” Stahl says.

The firm’s new 16-ton truck mount tender has been received extremely well. Truck tenders have been common in the past, but the units faded in popularity over the past several years. The design seems to be coming back, says Stahl. “Retailers and growers thought they could do without it, but it’s just a two-hopper tender they can use to fill the gaps with the larger tenders,” he points out.

“We updated the entire conveyor system using cutting-edge 3-D design to optimize the Quickveyor,” describes Shan Kruse, General Manager and Director of Product Development at Peterson Motors. For instance, the unit now features an all-aluminum side rail that saves weight, improves strength and virtually eliminates multiple corrosion issues. Lift height and swing width have been increased. And the Quickveyor’s 27-ton legal payload has been improved, while still being able to haul a full load of urea.

At Brehmer, the firm is currently building on to its existing facility to allow for increased production. In addition, “our engineering team has been hard at work testing power units that deliver our required performance while giving the customer an affordable price,” says Wegner. “Government regulations control the amount of emission a diesel motor can produce, thus making Tier 4 Final diesel motors the new standard.”

The team at Chandler has changed and improved some steps in its manufacturing process, with one result being production lead times have been reduced, says Michael Sosebee, Sales Manager at Chandler Equipment. The company’s units include many of the features being implemented across the industry recently, he notes.

Hays LTI has made several improvements to its 24-Ton Tender line, which already offered a steeper hopper slope, high capacity and lower trailer weight. And moving into a new facility has allowed the company to grow its equipment line and increase production. “We’re getting tenders to fields across the U.S. quicker than we ever have,” says Ronald Hays.

He’s also excited that his company’s line of 6-, 8-, and 10-ton tenders “have been received so well by the industry.”

“These upgrades are the first phase of ongoing improvements to enhance the quality and performance of the Willmar product line-up,” says Reznechek.

More specialized equipment companies, such as in seed tenders, are perhaps feeling the recent economic pinch the most these days.

“We watch the markets — grain and corn — and what farmers are earning back from their yields. Ultimately it can’t get any worse,” says Laura Underwood, Marketing Coor­dinator at HitchDoc. But with the current political climate, she thinks exports will grow, and commodity markets will turn eventually around.

She’s seen a trend with HitchDoc’s Travis Seed Cart where more seed dealers have been buying the units rather than growers. The reason: The bulk seed cart can deliver seed in the spring and again in the fall during harvest.

In 2016 HitchDoc released a line of conveyor-style seed tenders. To handle seed more gently, the conveyors “polycup” around the seed to prevent damage, says Underwood. And the auger carts feature a reverser. When it is done running, operators can just back the seed out of the auger rather than having it pinched.