Our CropLife 100 dealers may be reporting a downturn in fertilizer sales these past few years, but that doesn’t seem to be impacting the sheer volume of materials they still need to mix and deliver, say blender manufacturers.

Indeed, according to the National Corn Growers Association, 2016 was a record year for corn production and 2017 was equal to it. “It’s simple math that as crop yields continue to increase, the need for fertilizer will follow,” says Lloyd Lewis, Automated Systems Sales Support with Doyle Equipment Manufacturing.

A qualification, though: Any time sales are down, buying decisions are more cautious, says Bruce Hinkeldey at Ranco Fertiservice. “But retailers know they are in business for the long term. They’ve weathered the highs and lows and still plan for future improvements and expansions. Ranco is still busy providing equipment plans and quotes to our customers.”

From his company’s experience over the last year, Charles Formisani, Director, Business Development with Sackett-Waconia, says a lot of people are getting ideas for future new projects or wanting to discuss upgrades to existing dry fertilizer plants in order to increase speed — without giving up blend quality — and to incorporate value-added products and other capabilities. While he doesn’t see a big decline in retailers’ throughput, he admits this is a tough market to make margins, and that’s affecting the whole value chain’s ability to invest in capital projects.

Most manufacturers CropLife® magazine talked with say that long-term planning is one of the biggest challenges dealers face when purchasing a blender. It’s knowing where their business is going and deciding what “tools” will get them there, says Doyle’s Lewis. “Each buying decision can shape and direct the customer’s business for years to come.”

Planning needs to incorporate new products, both dry and liquid, being brought to the marketplace every year, says Ranco’s Hinkeldey. “This creates the feeling of uncertainty by not knowing which of these products dealers will need to add in the future.”

Sackett-Waconia’s Formisani says a lot of his team’s time and effort is spent understanding and testing “next generation” fertilizers, additives, coatings and the like to be able to offer systems designed for “tomorrow.” They also help customers understand how future nutrient technologies may work with different types of blending technologies. One example is batch blenders, which have great flexibility when liquids are added because the retention time can be adjusted to match the requirements of each liquid, of different temperatures, etc.

Dealers have a lot of features to consider when buying a blend system, but a few factors rise to the top. 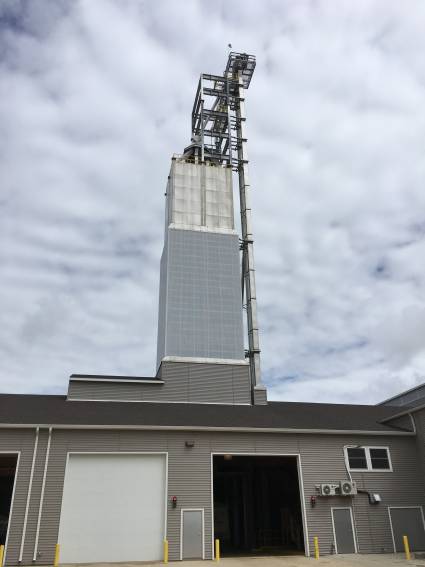 “Speed is really the name of the game, and it will continue to be,” says Nate Reznechek, Sales Director — Fertilizer & Willmar with GSI/InterSystems. He adds that what his team most often hears from customers is the need for that fast blend — plus quality — at a good price. This was the vision behind the company’s new High Output Blend Tower.

Reznechek says some key features of the system include the largest full open dual stage Salem gates in the industry — allowing for fast and accurate weighs — and the largest horizontal high intensity paddle blender. “The tower can provide a high quality eight ton blend in under 60 seconds. As fast as a driver can un-tarp and park, we can have him filled and moving again,” he describes.

Another feature: There’s no restriction on which major bins fill which weigh hopper, allowing for great flexibility, so efficiency isn’t sacrificed when blending. Reznechek adds that all equipment is stainless steel, and the structure is hot dipped galvanized, so there is no need to repaint a tower after a few years of use.

“This is an industry game-chang­ing blend tower,” he contends, and has noted that ag retailers are seeking this kind of innovation from manufacturers.

Beyond speed, Sackett-Waconia’s Formisani says the second biggest demand from fertilizer dealer customers is the flexibility to add liquid and dry coatings and other value-added products. “They allow retailers to more easily customize their blends and bring unique value to their growers,” he says.

“As more liquid coatings are being utilized, many companies are offering more concentrated formulations which can greatly affect how it is applied,” he explains. “Our precision blending technologies are geared towards combining speed, blend/coating quality and maximum flexibility for the future.”

Adams Fertilizer Equipment has found that low rate micronutrient use is on the rise. Blenders need to have the technology to apply low rates of these products — some as low as 1.5 pounds per ton, says Shawn Hudspeth, General Manager. His company uses LEC technology PLC panels to control its “Smart Hopper” impregnation systems and Decline N Weight blending with micronutrients and liquid impregnation.

Since its purchase of Yargus in late 2016, Ag Growth International Inc. (AGI), Winnipeg, Manitoba, Canada, has brought additional international perspectives in the specialties area to Yargus. For instance, Alexandre Camolese, Sales Manager for Brazil, explains that in his country the use of specialty products is increasing every year. In a farm there, customers there might buy 8 tons of NPK and 1-ton of specialty fertilizers instead of simply purchasing 10 tons of NPK.

“This market change will result in increased productivity, lower labor costs to apply fertilizer in the field and in the end, less fertilizer will be needed,” he believes.

Dealers want other new technologies being developed to regulate and monitor blending. Wireless control of blenders is gaining more attention, as is sharing of data and streamlining the exchange of job information, says Hinkeldey. Ranco HMI controls, for instance, offer the ability to exchange data from the blend system with the customer’s accounting system and also wirelessly control the blender.

Sackett-Waconia now has several upgrades available with its Precision Blend towers, including stair access and a low profile design that keeps more equipment near the ground. The company has developed a full range of these updates for both Precision Blend towers and Declining Weight systems to meet the needs of small, economical retail plants all the way up to large hub plants. All systems have multiple options for the addition of liquids and powders. 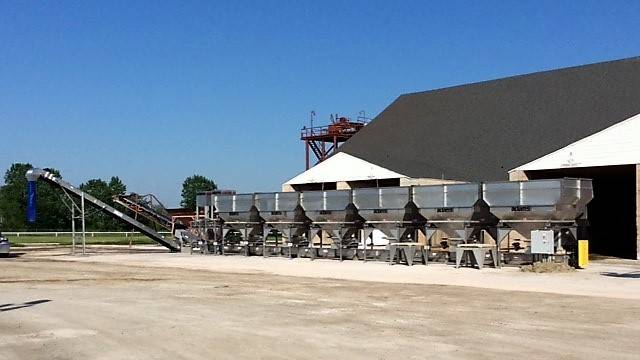 Adams Fertilizer has expanded its Decline N Weight blender line with multiple hopper sizes and special micro nutrient application options with impregnation. Hudspeth also points out the simplicity in operating these LEC-controlled systems. “If you can operate a smart phone then you can operate the new Adams Decline N Weight blend system,” he says.

In 2017 Doyle introduced a new blend unit, trademarked the Autobatch Blend System. Lewis says it features either a single weigh hopper or multiple weigh hoppers that utilize a high-speed rotary mixer that is fully automated and is legal for trade. The company has also redesigned its Declining Weight blend system to include multiple software options. And at press time, Doyle was on the verge of releasing additional system upgrades — details will follow in upcoming issues.

He adds now that Ranco’s Drag Chain Metering Unit is in the market, “new and existing customers have fallen in love.” The low speed to high speed range capability is unmatched and was a result of extensive in-house testing. “Each bin is capable of tremendous output, but can also meter at a tremendously low rate. This is thanks to superior design, and the DC control system that maintains incredible low end torque that just cannot be matched,” he says.

Yargus has updated its tower design to offer more storage and increased the width making it safer, easy to service when accessing the equipment. In addition, the Yargus Tower now includes the “Stairway to Heaven,” says Meg Steward, Division National Accounts Director. The stairs allow access throughout the structure, including to the top of the tower and to the drive of the bucket elevator leg. “This new design gives customers a one stop shop for safety and speed,” she says.

The Yargus Tower now also serves a dual purpose of being both a wholesale and blend tower. It can operate at speeds up to 294 TPH of blended material and 350 TPH wholesale at the same time. This allows for a combined total of blending and wholesale of 644 TPH or up to 700 TPH of straight wholesale product, says Steward.

He would add that Yargus’ parts department and service and install team have greatly increased efficiency and decreased response time for quicker turnaround on repairs and warrantee work.

Still ahead: A new version of the LAYCOTE Powder feeder will be coming out in early 2018. Its new hopper design will improve powder flow over Yargus’ existing model.

Adams’ Hudspeth summarizes the state of today’s blender market by saying buyers need to take into account quality blend, speed, and durability versus the cost of the unit. One example of a trade-off: “Our Decline N Weight blender can load a trailer tender in seven minutes on average, which translates to high tonnage use and increased loader speed or size, usually seen at terminals or larger retailers,” he says. “Dealers may sacrifice the speed of our Decline N Weight blender for rotary or vertical blend systems where a 15 minute blend turnaround time is sufficient.”