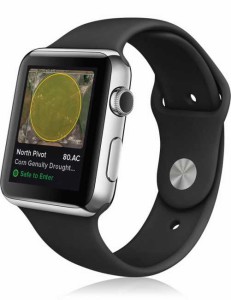 Agworld for the Apple Watch is coming soon.

Western-Australia-based Agworld — having fully launched its data management software system stateside last year after a 2013 soft launch — is getting close to releasing a version of its software that interfaces with the Apple Watch.

Zach Sheely, vice president of sales and operations, says that several large, well-known U.S. cooperatives (Stanislaus Farm Supply, Wilco-Winfield and Centennial Ag Supply) that reside on the CropLife 100 annual ranking of the top ag retailers in the U.S. have signed on in recent months.

“We are seeing a lot more momentum in corn and soybeans, as well as some hotspots of adoption throughout the Midwest,” says Sheely. “I think how well some of our apps function when they’re offline (without a connection) has won us a lot of business.”

Additionally, Sheely sites overall computing speed and ease-of-use as some of the top features his team uses to sell growers on the system, alongside what he deems a “unique financial planning tool.”

“Instead of having a vague budget in mind as field work is going on, we focus on making the grower’s budget actually useful in the field,” he says. “So they can create a job list from their budget and break things down on a per-field basis, so you’re tracking in real-time where you are budget-wise at all times.”

Agworld also tracks Integrated Pest Management (IPM) plans, as well as water-applied throughout the season. Sheely says his team is currently working on pulling in automated transfer data from irrigation pivots and local soil moisture and weather stations, which should be available soon.

However, Sheely says the number one differentiation point among Agworld and its many competitors is the company’s stellar reputation in customer service.

“I think our customers would vouch for how good our support service really is,” he says. “I’d say 99% of the time they call — no matter what time it is — we have somebody there to answer and work with them. We also have a fast turnaround on e-mails and we’re working more and more to leverage that asset, along with posting YouTube ‘how-to’ videos and screen shares.”

“The software just keeps getting better and better with every update, so I’d say I’m 100% satisfied, and these guys deserve a pat on the back,” says Payne during a rare June break in the action on his 6,000-acre operation. “Any issue I’ve ever had has been resolved within 24 hours and they have staff in Australia that are working on issues through the night.”

Payne, who grows almonds, walnuts, pistachios, processing tomatoes, alfalfa, sunflowers for seed, garbanzo beans and cucumbers for pickles, says the software helps him save time while also protecting his workers, among other things.

“I’ve been out in my fields and come across a weed that I don’t recognize, and what would happen before Agworld is I’d have to go back to the office and start researching what that weed is, different herbicides to treat it, etc., and now I just go back to my truck and use Agworld on my iPad — it’s got all kinds of information on products and labels and application rates,” he says.

“And they’ve been great on listening to my feedback — I asked for a worker protection standard where I can see a report at the start of the day listing all of the fields that we need to stay out of (due to label reentry intervals) and push that out to all my employees’ iPads so they know where not to go,” he continues. “That’s something they are working on now.”

Managing such a diversified operation, Payne naturally spends a substantial amount of time filling out paperwork for the State of California, EPA and other regulatory agencies that have reporting requirements for producers in the state. Agworld has saved him time (probably a few paper cuts, too) in that regard as well.

“I have pesticide use reports that have to be filed with the State of Cali­fornia by a certain deadline or I face fines,” Payne explains. “Before we had to run an export of the data, then format it in Excel and run a macro on it, and then I’d have to personally take it to the county on a flashdrive. Now we files those same reports electronically with literally the push of a button. One click and we’re done.”

Payne now has a full year with Ag­world under his belt, giving him the ability to analyze data from past seasons to make decisions, and the staff’s proactive approach to marketing has “really impressed me.”

“I first downloaded a trial version and I had that going for about a week,” he says. “One day I get a phone call from Agworld and they just wanted to make sure I didn’t have any questions or anything like that. Then a couple weeks later they sent Zach Sheely himself out to see me and show me how he uses the software on his own ranch.”