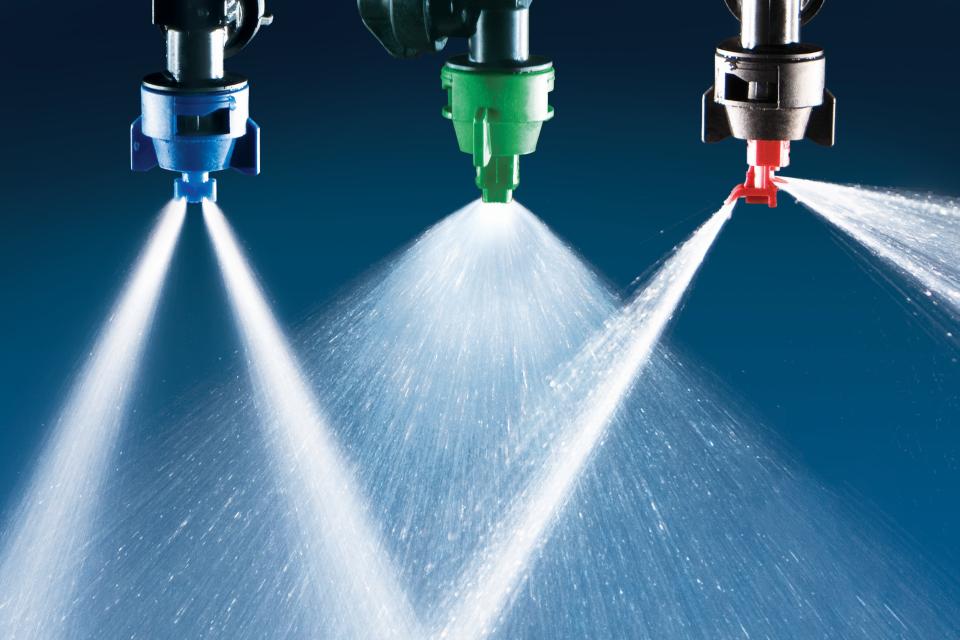 The demand for nozzles and spray tips has remained high, driven by the introduction of dicamba cropping systems.

Over the past few seasons, various segments of the agricultural marketplace must have seemed like a yo-yo to some observers: Up one year, then down the next, then back up, etc. Throughout this turmoil, the performance of the nozzles and spray tips category, according to industry insiders, has been a bit more consistent year-after-year.

“The nozzle market has been steady over the last few years despite an overall downturn for whole goods due to low commodity prices,” says Will Smart, President of Greenleaf Technologies. “Even if users don’t buy new sprayers, they will often upgrade or replace their spray nozzles. Also, users continue to become more educated about spray nozzles due to the need to match the nozzle to the application.”

Katie Banaszak, Marketing Communications Manager for Hypro and Shurflo at Pentair, agrees. “The agricultural spray nozzle market was very strong in 2017,” Banaszak says. “Heightened awareness of off-target movement of pesticides and the increasing occurrence of herbicide-resistant weed species have placed more focus on the importance of pairing spray nozzles with the correct application type.”

Of course, according to Tim Stuenkel, Global Marketing Communications Manager for TeeJet Technologies, there was one topic that dominated the whole of the application marketplace during the 2017 growing season — and it promises to continue to dominate going forward. “Dicamba is the No. 1 driver right now,” Stuenkel says. “Achieving excellent drift control, staying on label, and practicing good stewardship are fundamental to successful application of new generation dicamba products. Choosing the right spray tip is a big component of that process.”

Pentair’s Banaszak couldn’t agree more with this assessment. “Issues stemming from off-target injury from dicamba in 2017 placed a renewed focus on spray nozzles and herbicide delivery methods,” she says. “Lessons learned from off-target dicamba in 2017 were hard lessons to learn, but the renewed focus on application stewardship will be valuable for our industry moving forward.”

As a result, says Mark Bartel, President for Wilger Inc., applicators and sprayer users are placing more emphasis on tip selection. “Applicators have come to the realization that one tip may not be able to provide the best results and may not be ‘legal’ for all applications,” Bartel says. “They are buying more tips to have tips producing the best or recommended droplet size at the proper application rate and pressures for each application.”

Dicamba wasn’t the only driver for the growth of nozzles and spray tips during 2017, he adds. There was also interest in Pulse Width Modulation (PWM) spray systems. “The need for improved, more precise applications has increased the use of PWM spray systems,” Bartel says.

Banaszak points to the introduction of new spray options as a growth driver from 2017. “The launch of new application technology for agricultural applications, such as the John Deere ExactApply system, have people thinking more about their nozzle selection and how they can use that to maximize their chemical investments,” she says.

Lastly, TeeJet’s Stuenkel says his company saw more demand for variable-rate spray tips last season, particularly for fertilizer work. “The variable-rate technology can be used in two ways: Either to allow a wider range of operating speeds under a fixed rate application or to be able to more effectively and efficiently complete variable-rate, prescription-based applications,” he says. “Either way, variable-rate tip technology translates into increased productivity for the operator.”

Naturally, nozzle and spray tip manufacturers have tied into one or all of these trends when it comes to their plans for the 2018 growing season. “Our newest spray tip is the TTI Twinjet (TTI60),” Stuenkel says. “This is a brand new tip that produces extremely coarse and ultra-coarse droplets like our TTI, but with a twin spray pattern for improved coverage and canopy penetration.” At this point, he adds, the TTI60 is not approved for dicamba application, “but we continue to partner with the crop protection industry to see what new options, including the TTI60, that we can make available to growers and applicators.”

Over at Wilger, the company plans to build off the initial market success it had with the UR Series tips, introduced in 2017. “This tip was approved for dicamba applications, which resulted in an immediate increase in demand, which continues into 2018,” Bartel says. “The change to a minimum application rate of 15 gallons per acre from 10 gallons for some applications shifted the size of tips, which then created a need to buy additional sizes of tips.”

And according to Greenleaf’s Smart, the 2018 season is already off to a strong start for the company’s tips. “Dicamba-tolerant acres are predicted to be up significantly, so ultra-coarse nozzles will be in demand,” he says. “Our TADF06-D should be ideal for applying 15 gallons per acre at 9 to 13 mph, on 20-inch spacing, and will provide maximum coverage by targeting weeds from four different spray angles in one pass.”

In addition, Smart adds, Greenleaf Technologies is seeing an increase in the demand for weather meters in conjunction with nozzles and spray tips. “Users are learning that it is important to measure wind speed and direction in the field and at sprayer boom height at the time of application, rather than relying on a weather station that may be miles away, which usually measures the wind speed at a significantly greater height,” he says.

Still, Smart says, there is some uncertainty in the application marketplace among the company’s customers, especially when it comes to the use of dicamba-tolerant crops following the 2018 growing season and their nozzle choices. “Users that have been using our nozzles for years realize that the module design allows them to convert our Ultra Coarse D Series nozzles back into [the] standard TurboDrop nozzles if the dicamba technology is not re-registered for 2019,” he says. “In other words, they will not have spent money on nozzles that may become obsolete after one season.”

Banaszak says Pentair is planning to introduce a new nozzle under the Hypro name developed specifically for applications requiring extreme drift reduction such as dicamba. “Ensuring on-target spray application will remain an important topic for the 2018 growing season and beyond,” she says. “This new nozzle will provide greater drift reduction to maintain application accuracy.