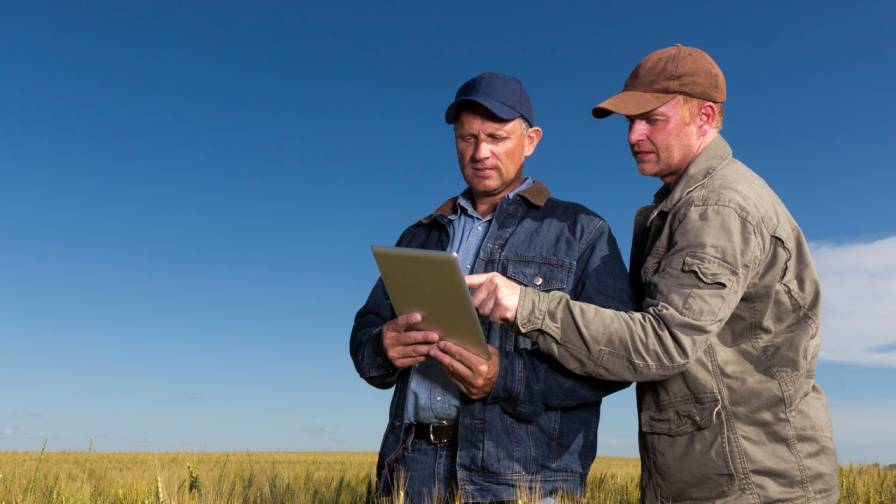 Mobile apps will continue to be at the heart of the data transformation in agriculture. Photo Credit: All About Food

The agricultural industry is being transformed by the use of data. It is everywhere, and over the next several years, innovative new uses of information across agriculture — from yield optimization and fertilizer management, to food safety and connected vehicles — will be adopted.

And mobile technology — specifically apps — will be in the center of it all. “We expect information at our fingertips, and the smartphone has enabled data collection and information to be ubiquitous,” says Doug Applegate, CEO and owner of Praxidyn, which offers an Android app for its new portable ag chemical blending system, Mixmate.

Lanny Faleide, President of Satshot, which powers the Landscout and iCue Manager apps, agrees. “Mobile apps will be the standard for access to agricultural data because the farmer is mobile all the time,” he says. “It’s a very complimentary technology to the work habits of agriculture.”

Applegate and Faleide, along with several other app experts, recently shared their thoughts on what’s trending in mobile apps in agriculture. Here are six trends that stood out:

Did you know that one in four mobile apps, once downloaded, is never used again? Like most consumers, ag professionals want immediate benefit from their mobile experience or else they’ll be quick to bail. It’s one of the main reasons why app developers are placing a huge emphasis on user experience and satisfaction.

“If it isn’t useful, then farmers and practitioners won’t use it,” says James McCall, a member of McFinney Agri-Finance, which offers a Web-based app for creating descriptive farm maps. “If there are clear benefits with the app, then farmers will be patient enough to deal with a technological learning curve.”

John Deere is no stranger to the mobile app world. With nearly 20 apps for agriculture, the company makes user experience a top priority, says Aaron Bartholomay, Ag Retail Solution Owner. “If you have a valuable app but it lacks a good user experience, then the app will ultimately be lackluster,” he says. “The right combination of a premium user experience and valuable information will make the success of the app.”

Simplicity also helps enable a positive user experience. If a mobile app is not super easy to use, regardless of the device it’s used on, then people won’t use it again. And that starts with an intuitive user interface, according to experts. “If the app is difficult to use or flaky, then it will not gain repeated use,” says Paul Turner, CEO of AgDNA, a data analytics company focused on IoT (Internet of Things) connectivity solutions.

With thousands of apps being introduced each month, there are probably thousands of hackers working hard to tap into these apps and steal valuable user information. That’s why developers are ramping up security with their mobile applications. “Data security is a huge importance,” says Jimmy Ridgway, Farmer Engagement Manager at Yara North America, which currently offers the Yara CheckIt, TankMixIt, and DiscoverIt mobile apps. “Growers want to feel that their information is safe.”

The mobile app environment is also a key consideration when it comes to security, particularly mobile cloud apps vs. native apps. “We feel security is built into a cloud environment,” Faleide says. “But devices also have security. We prefer IOS because of its security standards.”

4. Customization on the rise.

“There will be more of a need to have apps that do specific things and not one app that does too many things, most of which people won’t use,” says Keith King, Owner of TractorPal, LLC. “Mobile applications will be very customized so people can pick and choose the ones they need.”

5. The emergence of predictive data analytics and IoT.

Imagine mobile apps that go beyond descriptive statistics and reporting on what has happened, to providing a best assessment on what will happen in the future. That’s what several experts say is the next big thing in mobile apps.

Praxidyn’s Applegate agrees. “Cloud technology, Big Data, and the Internet of Things all support the day-to-day operations on the farm,” he says. “We are on the verge of some very significant changes in automation around the farm.”

6. Wearable technology on the horizon.

Mobile is such a broad term that it includes any kind of portable device. In the coming years in agriculture this will mean an increasing amount of wearable devices such as watches and bands. “I think these items will integrate with the explosion in sensors,” McCall says.

Deere’s Bartholomay says the technology is still on the cusp of functionality. “There are many opportunities for wearable technology in the ag industry, however value to the user will continue to be scrutinized,” he says.

Others caution that wearable technology might take some time to gain traction in agriculture. “I don’t think the technology will have much impact in the next few years, and it might be more than 5 years before it is fully used,” King says.

Turner adds: “While these technologies are interesting, I don’t believe phones and tablets have been full exploited in their capabilities yet.”