At first glance the crop protection products category didn’t just survive the difficult year that was 2019. In many ways it did just fine. Still, compared with the performance the category has turned in over the past few years, this year probably feels like a bit of a letdown.

But as it turns out, this was not to be. As wet/cool weather plagued early spring planting across much of the country — and prevent plant acreage piled up throughout the first half of 2019 — the sales of crop protection products cooled off as well. According to data compiled from the 2019 CropLife 100 survey, total revenues for this category moved forward less than 2% for the year, coming in just under $12.1 billion. Worse still, since this sales growth rate paled in comparison with that of the fertilizer category, market share for crop protection products fell for the first time in six years, down 1% to 38%.

To better understand why crop protection products had less than stellar growth in 2019, it’s worth a closer look at the performances of herbicides, fungicides, and insecticides — the three segments that make up this category.

For the most part, insecticides trailed the other two segments, which has been the case the past few years. According to the 2019 CropLife 100 survey, only 33% of respondents saw sales increases of more than 1% in this segment during the 2019 growing season. Another 26% saw no sales increases in insecticides. The largest percentage (41%) said that their insecticide sales for the year dropped more than 1%. 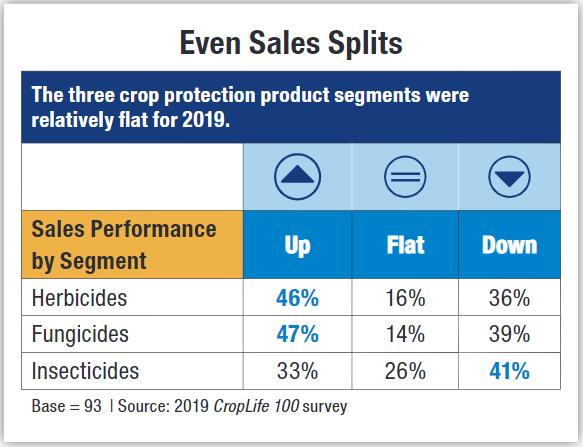 As stated, insecticides performed largely as expected in 2019. So did fungicides, with one key difference from prior years. Overall, the nation’s top ag retailers indicated that their fungicides sales improved during the year. According to the 2018 CropLife 100 survey, 45% of respondents had sales gains in this segment of more than 1%. In the 2019 survey this percentage grew to 47%. Another 14% said their fungicide revenues from 2018 to 2019 remained flat.

But the real news for fungicides comes from the CropLife 100 retailers who saw sales decline. According to the 2019 survey, 39% of the nation’s top ag retailers had revenue drops of more than 1% in fungicides for the 2019 growing season, which was an increase of 1% from the 2018 survey results.

Part of this decline likely ties back to another trend that has driven fungicide sales since at least the 2014 growing season — preventive applications. In part because of the persistent wet and cool summers across many parts of the Midwest, many grower-customers have applied fungicides to their fields as a way to prevent crop diseases from ever showing up in the first place. In fact, since the CropLife 100 survey began tracking this phenomenon a few years ago, approximately 50% of respondents annually have reported this trend was at work with their growers.

But this trend apparently died down significantly in 2019. According to this year’s survey, only 34% of respondents said their grower-customers applied fungicides as a preventive measure to their fields. The other 66% reported this practice was flat or declined among their customers.

Another reason the crop protection products category might have underperformed in 2019 could tie back to the herbicides segment. Since the beginning of the 21st century, the steady spread of herbicide-resistant weeds across the agricultural landscape has forced grower-customers to employ an increasing array of active ingredients into their fields to fight back. It was for this reason that during the 2018 CropLife 100 survey, 69% of the nation’s top ag retailers said their herbicide sales had grown more than 1%. 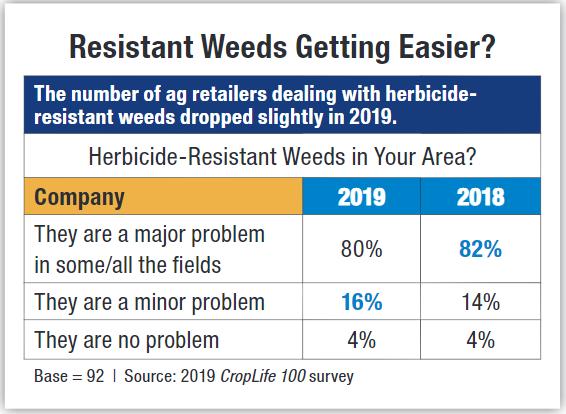 However, this sales boost did not hold during 2019. In fact, according to this year’s survey, only 46% of respondents recorded herbicide revenues gains of more than 1% for the year. Thirty-six percent said their sales had dropped more than 1% for herbicides.

Getting Ahead of Corn Rootworm Threat Requires Whole-Farm Approach

Rise and Fall of the CropLife 100: Top 10 Ag Retailers That Made the Biggest Moves in 2019