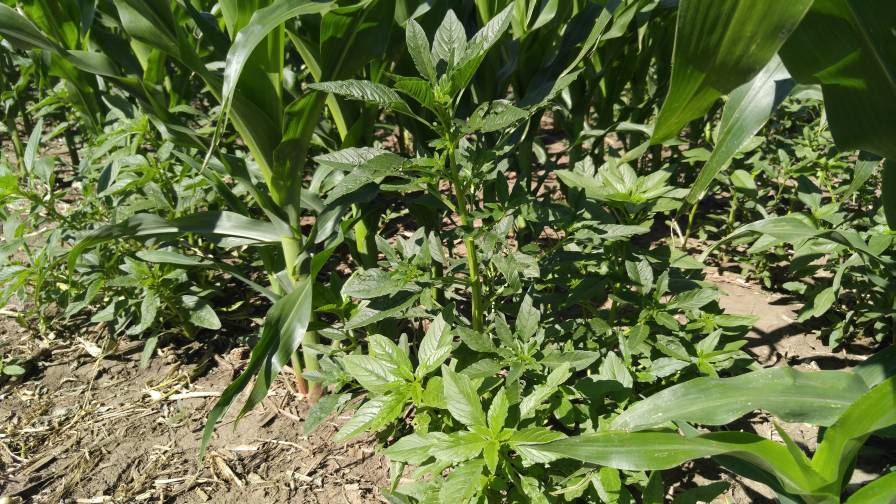 Although the list of herbicide-resistant weeds is a long one, industry insiders point out that some varieties are much more problematic than others, such as waterhemp (pictured).

As in any war, the longer the conflict goes on, the higher the numbers associated with this fight grow. This has certainly been the case with the ongoing struggle between ag retailers/grower-customers and herbicide-resistant weeds. According to most weed scientists, the number of herbicide-resistant weeds currently residing in grower fields around the globe has expanded from a handful in the mid-1990s to 238 today, with these being resistant to 26 different kinds of herbicides. In the U.S., virtually every state (with the exception of Nevada) has at least one type of weed resistant to herbicide applications, with several having multiple types present.

And although glyphosate-resistant weeds have received the lion’s share of attention from the marketplace, the entire notion of control using crop protection products is under attack. “Glyphosate-resistance is widespread,” says Dane Bowers, Herbicide Technical Product Lead for Syngenta. “And this is not limited to just glyphosate. All herbicides are now at risk.”

Although the list of herbicide-resistant weeds is a long one, industry insiders point out that some varieties are much more problematic than others. For example, in Missouri — which has one of the highest figures when it comes to herbicide-resistant weed types — waterhemp is the undisputed general of the resistant weed army. “It’s a nightmare,” says Kevin Bradley, Associate Professor at the University of Missouri. “We have waterhemp on every acre. Every farmer today in the state makes their farming decisions each year based upon their waterhemp problem.”

Making this problem even worse, adds Bradley, is the fact that an estimated 60% to 70% of these weeds now show resistance to multiple herbicides. “As weed scientists, we’ve looked high and low, and we can’t find waterhemp in Missouri that is not resistant to ALS, glyphosate, and PPO herbicides,” he says. “And some plants we find now are beginning to show resistance to 2,4-D as well.” 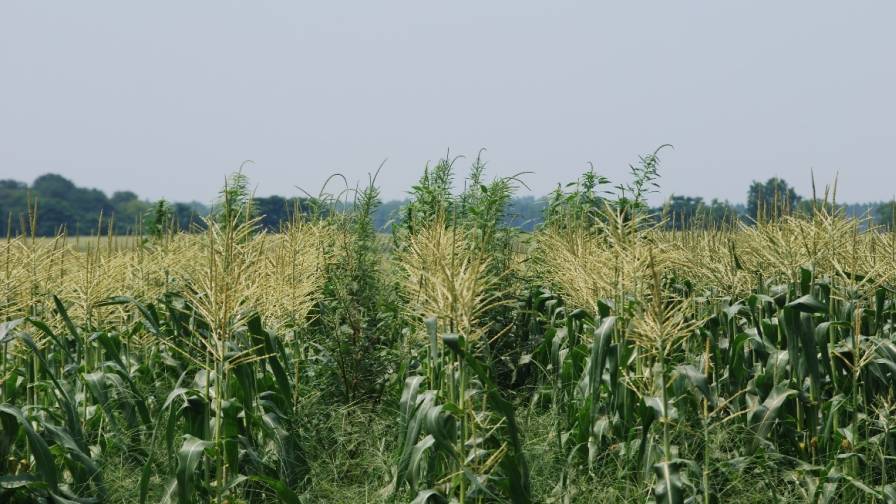 In addition to waterhemp, the other key herbicide-resistant weed agriculture is waging all-out war against (and vice versa) is Palmer amaranth. Able to grow 2 to 3 inches per day, quickly reaching a height of up to 8 feet, and producing millions of seeds each season, Palmer amaranth has been shown in research to be able to reduce soybean yields by 79% when present. In corn, this figure can hit 91% in yield losses.

Long a fixture in the Mid-South, Palmer amaranth has quickly spread much further north. Researchers discovered the weed for the first time in South Dakota in 2015 and in Minnesota in early 2017 (where it is suspected to have stowed away in a truck shipment of seed mix). “Palmer amaranth is quickly moving across a larger geography than we’ve seen with any other resistant weed,” says Bradley. “The movement is occurring through equipment, feed, seed, and even waterfowl.”

Besides its ability to spread and reproduce, Palmer amaranth also has a well-earned reputation for quickly developing resistance to multiple herbicides. For instance, last October, the University of Missouri identified a population of Palmer amaranth with resistance to both glyphosate and PPO-inhibitors. 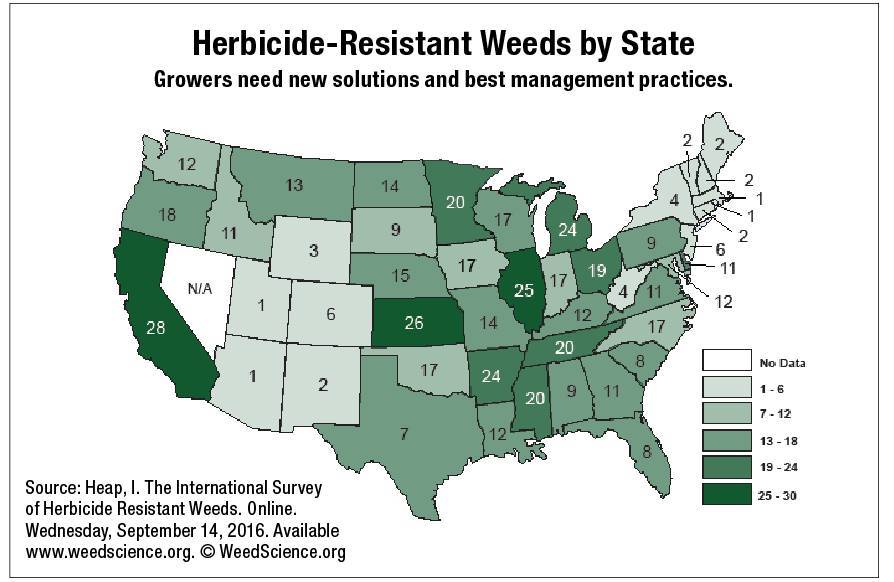 To appreciate just how devastating a resistant Palmer amaranth invasion can be to growers, consider this cautionary tale from Dr. Jason Norsworthy, Professor at the University of Arkansas. “In the mid-1990s, growers in Arkansas were seeing widespread ALS resistance in Palmer amaranth,” says Norsworthy. “But then, Roundup Ready crops came along, and by 1999, virtually the entire state had adopted these for their fields. This meant everyone was spraying nothing but glyphosate year-after-year to control weeds.”

By the early 2000s, he says, glyphosate was no longer proving effective as a lone weed control herbicide, so Arkansas growers began employing PPO-inhibitors into the mix. This worked for a few years.

As grower and weeds gear up the upcoming 2017 campaign, many experts believe that herbicide-resistant weeds will already have the upper hand because of Mother Nature. “This past winter was pretty warm compared with other years,” says Jenny Goodman, Global Product Manager, Corn and Soy for DuPont Crop Protection. “If this provides a longer growing season than normal, the weeds will also have a longer time to sprout and grow, too.”

In recent years, many growers have started moving to alternatives to glyphosate-resistant crops such as the Roundup Ready varieties. For several years now, LibertyLink soybeans which work with glufosinate herbicides have been growing in popularity. For the 2017 season, says David Hollinrake, Vice President of North America Marketing, Crop Science for Bayer CropScience, the company estimates that approximately 15% of the nation’s 86 million soybean acres will be planted with LibertyLink seeds.

In addition to the LibertyLink option, soybean growers will also have one other cropping system to employ in 2017 — dicamba-resistant soybeans. According to Dr. Bryan Young, Weed Scientist at Purdue University, this technology gives growers another control tool for their fields. “There is a serious challenge controlling weeds post-emergence in soybeans right now,” says Young. “Dicamba should help with this, especially with Palmer amaranth and waterhemp that is glyphosate and PPO resistant.”

“Soybean growers have an urgent need for updated herbicide solutions that help them fight the shifting weed populations they see in their fields,” says Timothy Glenn, President of DuPont Crop Protection. “Competitive weeds and the rapid encroachment of herbicide-resistant weed populations are limiting yield and grower profitability. FeXapan controls herbicide-resistant weeds including kochia, marestail, waterhemp, and Palmer amaranth as part of a complete weed-control program.”

Also beginning to move into the herbicide-resistance weeds battle is the Enlist cropping system from Dow AgroSciences. Engineered to work with the herbicide 2,4-D, Enlist cotton is now being introduced into the U.S. market, according to John Chase, Portfolio Marketing Leader/Enlist Commercial Leader for the company. “And we are still waiting for import approvals from China for Enlist soybeans,” says Chase. “But once we have those, we are ready to move very quickly to get Enlist soybeans into the market as another option for growers to fight against resistant weeds.”

Better Use of Existing Troops

As these new post-emergence herbicide options enter the market, says Bill Johnson, Professor of Weed Science at Purdue University, they should provide better control than glyphosate on glyphosate-resistant populations, but overuse will eventually lead to the same old resistance problems.

“We have to be realistic in our expectation. So if we get into a situation with only two shots of 2,4-D and dicamba postemerge, what’s going to happen three, four, or five years down the road?” asks Johnson. “We’re going to have resistance because we’re basically spraying that weed with one active ingredient. Because of the pricing situation with soybeans, I know that’s what the temptation is going to be, but we want to warn against that.”

Some of the existing herbicide options for soybean growers looking for weed control for preemerge include BroadAxe XC (s-metolachlor+sulfentrazone) and Boundary 6.5 EC (s-metola­chlor+metribuzin) from Syngenta and Marvel (fluthiacet-methyl+fomesafen) from FMC Corp. In early 2017, Nufarm introduced Panther Pro (flumioxazin), which can be used in fall or spring burndown programs.

Also newer for soybeans is Zone herbicide (sulfentrazone+chlorimuron ethyl) from Helm Agro US. According to Jan Stechmann, President of the company, Zone offers long-lasting residual control of annual broadleaf weeds “and excellent residual control when tank-mixed with burndown herbicides such as glyphosate, paraquat, glufosinate, and 2,4-D LVE.”

In addition, Valent U.S.A. Corp. recently launched its new Valor EZ herbicide (flumioxazin). According to Dawn Refsell, Manager, Field Development, Midwest Commercial Unit for the company, Valor EZ is a liquid formulation for easier tank mixing and can be used as a residual partner on Roundup Ready Xtend crops. “Valor EZ can provide protection against a broad spectrum of weeds, including waterhemp and Palmer amaranth, for four to six weeks,” says Refsell.

For corn growers, herbicides that offers multiple modes of action are becoming more of the norm. In the past year, products such as Acuron (atrazine+mesotrone+s-metolachlor+bicyclopyrone)/Auc­­ron Flexi (mesotrone+s-metola­chlor+bicyclopyrone) from Syngenta and Resicore (acetochlor+clopyralid+mesotrione) from Dow AgroSciences have grown in popularity. “Corn growers are looking for ways to keep the weeds in their fields off-balance by using more modes of action,” says Lyndsie Kaehler, Corn Herbicide Product Manager for Dow. “Resicore delivers three different modes of action and is particularly good at controlling troublesome weeds such as marestail and waterhemp.”

Experts say that agriculture must do all it can to keep trying to combat the spread of herbicide-resistant weeds. The potential losses to growers are staggering. According to a recent study from the Weed Science Society of America (WSSA), corn and soybean growers in the U.S. and Canada would lose approximately $43 billion in revenue annually if they lost all their abilities to control weed infestations in their crop fields. The study was conducted over a seven-year period and found that if all weed control practices were eliminated, the average yield loss for corn would be 52% and 49.5% for soybeans.

“It’s an astonishing number and indicates the significant threat weeds present to crop production,” says Dr. Anita Dille of Kansas State University and Chair of the WSSA Weed Loss Committee. “It also drives home the importance of taking steps to mitigate the development of herbicide resistance. When a single herbicide is used repeatedly to the exclusion of other controls, weeds can become resistant and can grow unchecked.”

For this reason, some agronomists are recommending growers consider non-herbicide methods to try to combat resistant weeds. For example, the use of wider row spacing or tillage can keep weed seeds from sprouting.

Then there is the use of cover crops. According to researchers, cover crop residue can create an unfavorable environment for weeds by reducing the light and moisture available for germinating their seeds. In one study, preemergence herbicides were also added to an integrated program using cover crops and it found that Palmer amaranth population density and seed production were significantly reduced compared with using a glyphosate-only program.

“Our study shows that farmers diversifying their weed management program can reduce both the preva­lence of resistant weeds and the size of the soil seedback,” says Dr. Nicholas Korres from the University of Arkansas. “This can help extend the useful life of the herbicides they rely on for weed control.”

0 1 5 Herbicide Resistance: The Numbing Numbers From The Weed Wars

MAGIE Rewind: A Look Back at Past ShowStopper Award Winners

A Team of Many Coming Together to Make Tech Hub LIVE 2022 a Success!