In these belt-tightening times, how can you hit the mark to preserve yield and save on input costs?

Dr. Carl Bradley, Plant Pathologist with the University of Kentucky (UK) and colleagues, sought to help answer this question by establishing corn fungicide research trials at nine locations in Kentucky. Their findings, published in 2020, determined that one application at the silking stage is the most cost-effective and provided the best disease control.

They evaluated a single fungicide application of Syngenta’s Trivapro (benzovindiflupyr + azoxystrobin + propiconazole) at the six-leaf collar stage (V6), at the silking stage (R1), as well as a sequential application at both stages. They found that treatments at the tassel emergence provided the best foliar disease control (gray leaf spot was present in all locations) with an 11-bushel response vs. the untreated check. The net benefit amounted to a little over $18 per acre.

As spraying at tasseling isn’t feasible for farmers with a ground sprayer given the height of corn, Bradley and his colleagues factored the cost of aerial application into their economic analysis.

They also found that the single application at the silking stage did not differ from the sequential double application. Bradley pointed out that the findings were not unique to Kentucky: Dr. Kiersten Wise and Dr. Darcy Telenko, for example, announced similar findings in one study last year in Indiana.

How well-timed an application is critical, but Bradley urged growers and retailers, first and foremost to use fungicides only when needed rather than an automatic application.

“You can manage a lot of diseases through picking the right varieties and hybrids, and good crop rotation practices, but if we’re relying on a single way of managing disease by spraying fungicides, that puts a lot of pressure on fungicides to work,” he said. “We start selecting out those individuals in the fungal plant pathogen population that are less sensitive to the fungicide, and we end up with fungicide resistance.”

“If you’re growing continuous corn the risk for disease like gray leaf spot is going to be greater, so you should consider picking hybrids that have better resistance, or spray a fungicide, or maybe do both,” Bradley told CropLife® magazine, adding that knowing the history of your fields and scouting are essential considerations in making the decision to pull the trigger on a fungicide application.

According to Nathan Kleczewski, Extension Field Crop Plant Pathologist at the University of Illinois at Urbana-Champaign, once plants have matured, it is nearly impossible to determine: 1) What pathogen infected your corn or was actually responsible for the yield impact, and 2) If the disease actually impacted the crop.

Why is this? As Kleczewski explains, many microbes love senescing, or dead tissue. In addition, the capacity for a disease to impact the crop involves many factors, but in many cases, when the disease arrives is as or more important than what disease arrived.

Diseases that are active during critical periods of grain fill are more likely to result in significant yield losses than diseases arriving late in the season, when yields are nearly made, he wrote.

“A great example of this is evident in southern rust, where if the disease arrives prior to R3, fungicide applications are likely to be an economically sound investment, whereas arrival near R5 is unlikely to cause sufficient disease to reduce yields or impact standability. In those cases, fungicide applications might reduce disease development, but the benefit in terms of yield protection is unlikely to be sufficient to cover application costs,” according to Kleczewski, adding, “These two points highlight the main take- home message: Scout your fields during the season, every one to two weeks from V6 to R5.” 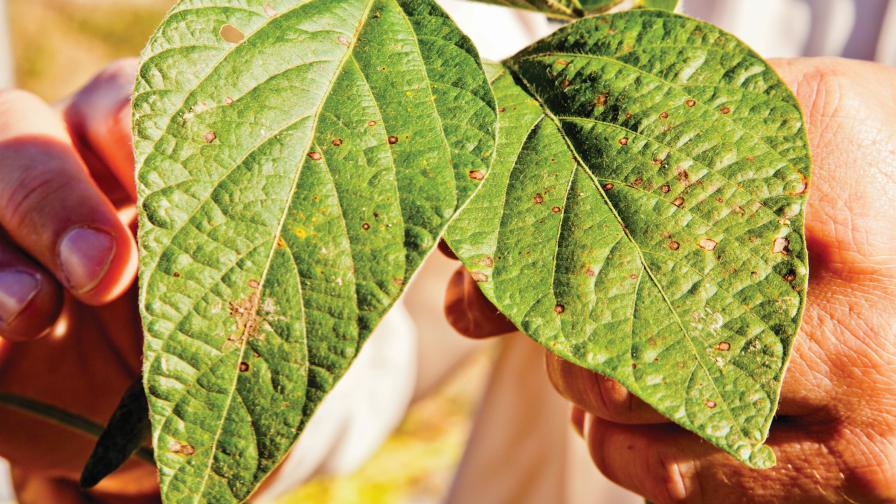 Soybean growers have been dealing with strobilurin-resistant strains of frogeye leaf spot.

For soybeans, fungicide timing has focused on when soybeans are in the reproductive stages (flowering or later), and clearance with a ground sprayer generally is not a problem, unlike it is with corn. However, the question whether to spray or not continues to be an important issue, UK’s Bradley said. For a disease like frogeye leaf spot, the problem is increasing resistance to strobilurin fungicides. Bradley and his colleagues have documented 19 states thus far with resistance to strobilurin strains of the frogeye leaf spot pathogen from Louisiana to Minnesota.

“We’re finding this disease is a lot more widespread than it used to be; it has resistance to one of the main fungicides we use, and it’s become a lot bigger issue for soybean producers across the U.S. in the last few years,” Bradley said, adding, “It’s important that we get newer chemistries and products that have multiple chemistries to help combat fungicide resistance. It’s good to see new products with new active ingredients coming out. Sometimes they do help increase efficacy, but one of the major things they help reduce or at least slowdown is the development of fungicide resistance.”

Sam Knott, Director of Central US Crops with generics player Atticus LLC, told CropLife that high demand for fungicides was a topic of conversation on a call with colleagues on Jan. 14.

“We’ve seen huge demand way over last year for early fungicide commitments at the retailer and the grower level. When you look at the grain prices going into the spring, generally the trend has been that the orders and consumption of fungicides will only increase in June and July, when most of those applications are made,” he said.

Lead fungicide products from Atticus include Aquila XL (azoxystrobin + propiconazole) and Acadia 2 SC (azoxystrobin) for corn and soybean. Knott said one of its growing products is Radius EQS, a combo of azoxystrobin and difenoconazole, with the latter ingredient being particularly effective on frogeye leaf spot in soybean.

The application can be accomplished via the 3RIVE 3D foam delivery system that provides optimal coverage at a low-use rate, allowing growers to plant up to 350 acres without refilling the system. Also on deck for the 2021 season from FMC is a liquid fertilizer ready formulation of Xyway for those with liquid in-furrow systems.

“When we make foliar fungicide applications, coverage is essential, but a lot of times we’re sacrificing lower canopy below the ear leaf and that, too, contributes to grain fill and corn yields. Being able to protect the whole plant is important with respect to protecting yield.” 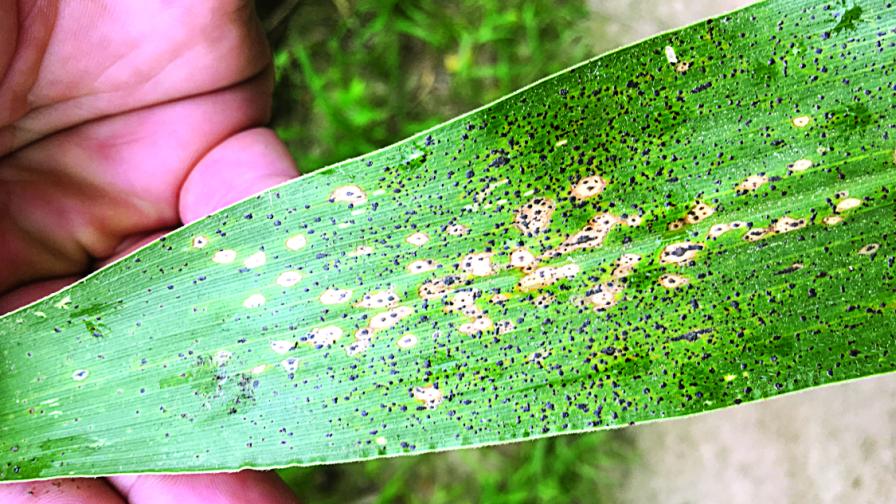 Tar spot is caused by the fungus Phyllachora maydis. The symptoms of tar spot look very much like tar splattered onto the surface of the leaf. Photo courtesy of Syngenta.

Some key diseases not on the label for Xyway include southern corn rust and tar spot. These diseases can be addressed with integrated management tactics, such as using a Xyway brand fungicide at planting followed by a timely foliar fungicide application.

From Corteva Agriscience, Aproach Prima is the go-to corn and soybean for control of diseases like tar spot, northern corn leaf blight, and gray leaf spot in corn, and in soybean, frogeye leaf spot and white mold.

“The one thing I can say with tar spot is it’s made us really good planners,” said Brian Early, Pioneer Agronomist. “When we had to start looking at variety tolerances and fungicides to manage tar spot, naturally we were picking up good control on things like northern corn leaf blight and gray leaf spot as well. Using Aproach Prima and picking our best varieties tolerances to tar spot has really paid off for us.”

It’s been a learning curve for tar spot management, but the word is: Go early, before tasseling. “We are not using any additives that could get arrested in development. We’re cautious on what we use and how we apply it, then coming back at the blister stage, and maybe a hair later with our second application trying to protect our green area to grain fill,” Early noted on a Corteva webinar, adding, “With the first application we’ve routinely picked up 15 to 20 (bushels) in our heavy tar spot area. Surprisingly, in our second application, we’re picking up another 13 to 15 (bushels) pretty regularly, so they’re more than paying for themselves. It shows how aggressive the disease is and how important the planning process is.”

“Adding Delaro Complete to a disease management program can help growers improve their plant health and overlapping modes of action to control key diseases, including increased activity on gray leaf spot in corn, and white mold and brown spot in soybeans,” Randy Myers, Bayer Agronomic Solutions Manager, said. “Through a variety of environmental conditions, corn and soybean growers across the U.S. can rest assured that their operations are protected against even the toughest diseases and will continue to move forward.”

One more entry to the fungicide market for row crops to watch out for is AMVAC in 2022, via its SIMPAS prescriptive application system. Jim Lappin, Director of SIMPAS Product Portfolio and Alliances, told CropLife the company is in talks with various manufacturers about formulating standalone fungicides as well as combination products for use with the SIMPAS system. Granular products are being evaluated as well as liquid formulations, he said. It will be targeting corn, soybean, cotton, and peanuts.

“What we’re talking about is prescriptively applying fungicides into areas that you think have a higher incidence of disease pressure or a higher likelihood of having wet conditions based on topography — we’re not talking about the whole field,” Lappin said. “We think we’re able to deliver a higher return on investment than a whole-field application because we’re targeting areas that are more likely going to be problems.”

Lappin added: “With SIMPAS, we’re able to go from a soil-applied, at-plant perspective and think about it from a prescriptive capability. Where a seed treatment puts the same dose on every seed across the field, we’ll have the ability to alter the dose based on prescriptive data points.”

2 2 5 Timing Is Everything: Hitting the Mark on Fungicide Applications in 2021