With 2019 finally behind the agricultural marketplace, the majority of the nation’s ag retailers are probably getting busy, poring over their business plans for the upcoming 2020 growing season. As we always do this time of year, CropLife® magazine devoted much of its January issue to looking at the State of the Industry for this segment of the agricultural world, with articles focused on how all the major crop input categories might perform this year based upon market trends and crop projections. This year’s report is sponsored by UPL.

Of course, we kick off this special look at the industry by presenting the results of our annual Buying Intentions Survey. Now in its sixth year, the survey is sent to CropLife readers in December. They are asked what crop inputs/pieces of equipment and technology they anticipate buying for their grower-customers during the upcoming calendar year.

Before looking too far forward, a brief look back at 2019 is in order. According to just about everyone in the marketplace, 2019 was an extraordinary year. And not in a good way. True, once the dust finally settled, grower-customers and ag retailers did manage to increase their overall sales vs. 2018. However, a good portion of this money came in the form of aid from the government to growers to help make up losses from the ongoing trade dispute with one of the country’s largest agricultural buyers, China. Highlighted by weather issues, a historic amount of prevent plant acres, and all-around market volatility, the 2019 growing season was one most agricultural participants were eager to put behind them as quickly as possible.

For 2020, 103 respondents returned survey forms. Overall, 87% described themselves as ag retailers/dealers. The remaining 13% was divided among fertilizer producers (7%), manufacturers/formulators (4%), and manufacturers/distributors of equipment (2%).

Looking more closely at the four major categories tracked in the 2020 Buying Intentions Survey, it’s clear one category — fertilizer — will likely stand out from the crowd this growing season. 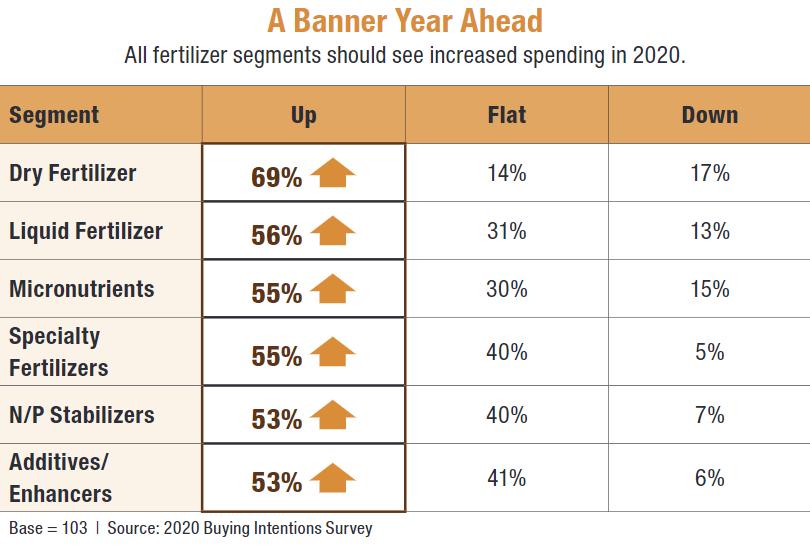 Overall, this shouldn’t be a surprise. Based upon numbers compiled for CropLife’s annual CropLife 100, the fertilizer category performed exceptionally well in 2019. Despite almost 19 million acres of cropland that didn’t get planted, the nation’s top ag retailers reported that their fertilizer sales in 2019 grew from $12.2 billion in 2018 to $13.7 billion — a bump of more than 12%. This kind of market growth had been hinted at during the 2019 Buying Intentions Survey, when 45% of respondents said they planned to increase their dry fertilizer purchases for the year, and 52% expected to do the same for liquid fertilizers. Meanwhile, sales for the rest of the fertilizer segments — micronutrients, specialty fertilizers, nitrogen/phosphorus stabilizers, and additives/enhancers — were projected to be relatively flat.

But this certainly won’t be the case if results from the 2020 Buying Intentions Survey are any indication. According to this year’s respondents, every single segment of the fertilizer category will see significant spending increases during the growing season. The biggest increases are expected in dry fertilizer, where 69% of ag retailers plan to expand on their purchases more than 1%, and liquid fertilizer, with 56% of respondents growing their purchases in this segment. The other four segments also see more than half of respondents (ranging from 55% for micronutrients and specialty fertilizers to 53% for nitrogen/phosphorus stabilizers and additives/enhancers) growing their spending. So, crop nutrients should continue to enjoy strong market demand based upon these findings.

While the segments of the fertilizer category look to have strong sales demand during 2020, the same can’t necessarily be said for the segments that make up the crop protection products category. In 2019 the overall crop protection category had a mixed year, according to the CropLife 100. For the year, sales for the category did improve, up from $11.9 billion in 2018 to $12.1 billion. However, because fertilizer grew at a much faster pace, the crop protection products category did see its share of all crop inputs/services fall 2% to 37%. 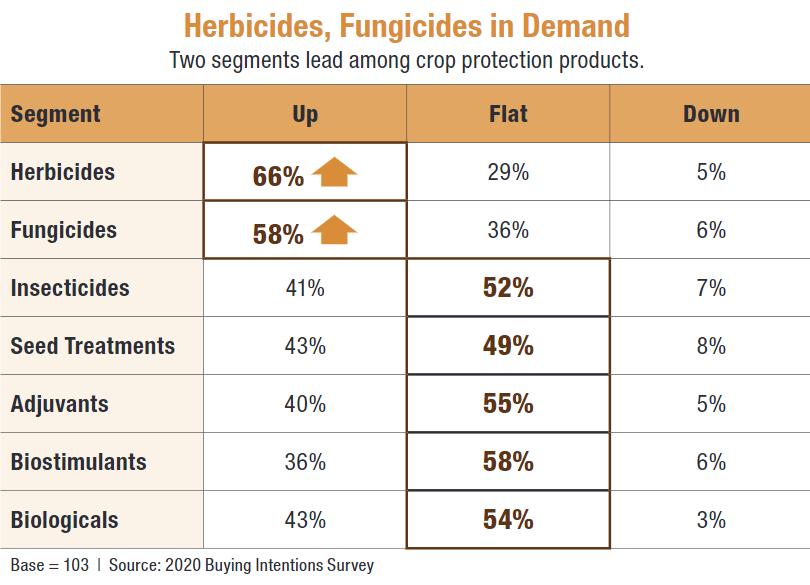 And there were hints that a “good news/bad news” scenario would play out for crop protection products based upon the 2019 Buying Intentions Survey. According to respondents last year, they were planning to increase their spending more than 1% in only two segments — herbicides and fungicides. The rest of the segments were projected to be flat for most ag retailers.

Now, it looks as if history will repeat itself for the crop protection products category. According to the 2020 Buying Intentions Survey, herbicides and fungicides are expected to be the only segments again seeing spending increases. For herbicides, 66% of respondents plan to grow their spending here more than 1% for the upcoming season. For fungicides, 58% of respondents are planning to increase their product buys.

As for the other primary crop protection products segment — insecticides — the news is a little less rosy overall but slightly better than it had been a year ago. During the 2019 Buying Intentions Survey, 35% of respondents said they planned to increase their spending for this segment more than 1%. For the 2020 survey, this percentage improved slightly to 41%. Still, the largest percentage of respondents — 52% — indicated that their insecticide buying would remain at the same level it was during the 2019 growing season. The remaining 7% plan to decrease spending in this segment, an improvement from the 14% that had planned to decrease their insecticide buys during 2019.

As for the other four segments within the crop protection products category — seed treatments, adjuvants, biostimulants, and biologicals — all are projected to see their sales remain flat during 2020 for most ag retailers. The percentage of respondents that anticipate flat spending in these segments ranges from 58% for biostimulants to 49% for seed treatments.

If there was one category that experienced a rollercoaster ride during the 2019 growing season, it was seed. As the late-arriving spring stretched into late May and early June for much of the country, many grower-customers tried to squeeze a month’s worth of planting into a few dry days. In several cases, planting never took place, as early June dates to claim crop insurance instead came about. In the end, the amount of prevent plant (acres never planted) ballooned to numbers rarely seen by the agricultural world. In all, government estimates placed the amount of cropland that never was planted with a crop at almost 19 million acres nationwide. Hardest hit were three states in the Midwest, led by South Dakota (3.9 million), Illinois, and Ohio (1.5 million acres apiece). 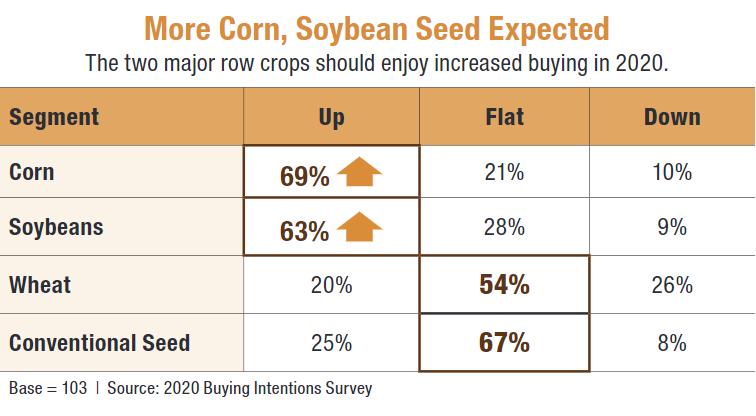 When all was said and done, the seed category had a relatively flat year among the nation’s top ag retailers. According to the 2019 CropLife 100, the seed category revenues from 2018 didn’t move at all, coming in at $4.8 billion for both years.

Of course, there had been hints that the seed category would experience such sales flatness during 2019. In fact, when the results were tabulated from the 2019 Buying Intentions Survey, the majority of respondents indicated their seed spending last year would be flat for three of the seed category’s segments — soybeans, wheat, and conventional seed. Only corn was expected to see a spending increase, with 45% of respondents saying their buys in this segment would grow more than 1%.

But my, what a difference a year might make! First up, corn seed can expect spending in 2020 to be much more robust than it was during 2019. According to the survey results, 69% of ag retailers anticipate growing their corn seed buys during the upcoming season more than 1%. Another 21% expect to spend the exact same amount on corn seed this year. Only 10% project spending less.

The biggest mover among seed segments in terms of spending could be soybean seeds. During 2019, with the trade dispute between the U.S. and China in full swing, soybean commodity prices (and some acreage numbers along with it) took a serious hit. Overall, USDA crop forecasts for 2020 seem to indicate growers will favor corn over soybeans for the upcoming season.

Even with these strong outlooks for corn and soybean seed sales, the other two seed category segments look to repeat their softer sales this year. For wheat, only 20% of 2020 Buying Intentions Survey respondents plan to up their spending more than 1%. For conventional seed, this percentage is slightly better at 25%. Most ag retailers plan to keep their spending levels on these two segments the same as in 2019 (54% and 67%, respectively).

Compared with the other three categories tracked in the annual Buying Intentions Survey, equipment tends to perform on a similar growth curve year in and year out. In fact, during the 2019 Buying Intentions Survey, no segment within this category had managed to track higher than 26% (for buildings/structures) in terms of spending increases more than 1%. Instead, almost three of four respondents in the 2019 survey indicated that their equipment spending for the year would be flat from what it was during the 2018 growing season. 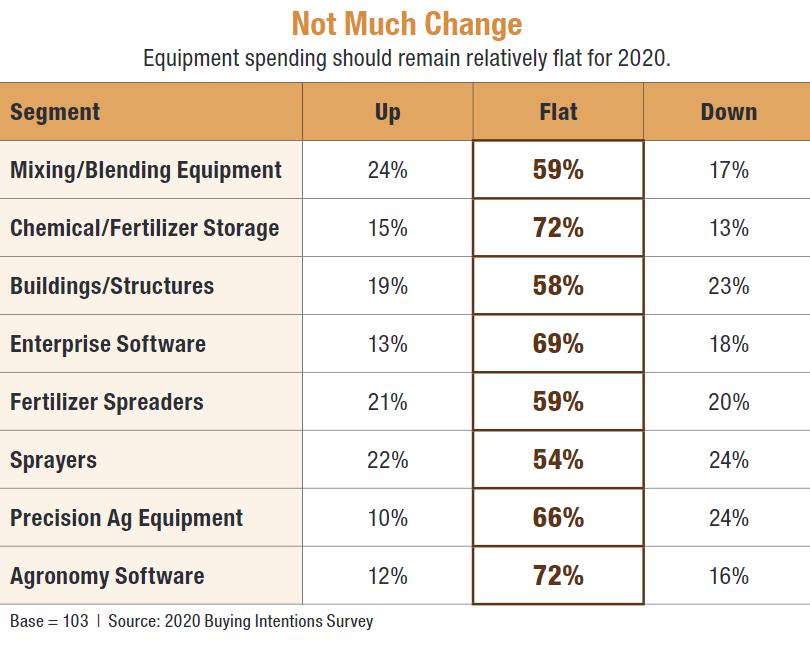 This trend should continue in earnest during the 2020 growing season. According to the 2020 Buying Intentions Survey, only three segments will once again top the 20% mark when it comes to increased spending levels. Leading the way will be mixing/blending equipment. For the upcoming season, 24% of respondents plan to increase their buys in this area more than 1%. Seventeen percent expect spending decreases in this segment. The majority, 59%, expect to spend the same amount in both years on this kind of equipment.

It’s the same story for self-propelled sprayers. According to the survey, 22% of respondents plan to increase their spending for these products more than 1% — identical to 2019’s survey results. Fifty-four percent are planning no spending increases for sprayers.

Just behind sprayer spending will be fertilizer spreaders. For this segment, 21% of 2020 Buying Intentions Survey respondents expect to increase their buys more than 1%. Fifty-nine percent say their spending for spreaders will be flat from 2019, and 20% expect to spend less this year vs. last.

The rest of the equipment category segments — chemical/fertilizer storage, building structures, enterprise software, agronomy software, and precision ag equipment — all failed to top the 20% mark in terms of spending growth. According to the survey, the highest percentage among these belonged to buildings/structures, in which 19% of respondents plan to increase spending more than 1% during 2020.