Somehow, it is 2021 and we are already about to enter year five of dicamba-resistant technologies. Though its status has been on shaky ground at times, EPA’s five-year registration renewal last fall grants a sense of stability to the beleaguered active.

Newly tacked on to the lengthy list of restrictions, of course, is the volatility-reducing agent (VRA), which is required to be added to the tank with either XtendiMax, Engenia, or Tavium.

Previous labels specified keeping the spray tank pH above 5, in order to decrease the likelihood of dicamba to volatilize into a gas hours after application. The problem was that in applications where glyphosate was mixed in the tank with Engenia or XtendiMax, the spray tank pH would “most every time fall below 5.0,” according to research by University of Tennessee’s Dr. Larry Steckel, Extension Weed Specialist and Dr. Tom Mueller, Professor of Weed Science. In connection with the new label, BASF announced it plans to launch Sentris buffering technology in time for use in the 2021 growing season. Sentris is a liquid buffering agent that when added to a dicamba spray solution, will increase and stabilize the solution pH and reduce the potential for volatility. It has also been proven to reduce the potential for tank-contamination by helping with spray system clean-out and hygiene.

Tracy Rowlandson, Technical Marketing Manager with BASF, told CropLife® that while Sentris is designed to reduce the potential for off-target movement that is a result of volatility, it doesn’t mitigate or reduce other application requirements of the label, such as nozzle selection, downwind buffers, and wind speed thresholds.

“Our applicator training also includes discussion on the requirement to include a pH buffering adjuvant into every application, so we’ve incorporated that into self-paced training as well as live webinars, and we are doing everything we can to make sure word gets out and everyone has the information they need for 2021,” Rowlandson added.

BASF granted University of Tennessee weed scientists access to Sentris over the winter — Dr. Tom Mueller conducted the testing. Their data, according to Steckel, suggest that Sentris can decrease dicamba volatilization, in the first 36 hours after application, by about 70% in an Engenia + glyphosate tank-mix.

“Of all the new label changes on Engenia, adding Sentris to every dicamba application, based on this research, could be the most impactful on keeping the herbicide in the target field,” Steckel wrote in a UTcrops.com post.

Bayer Cropscience also gained EPA registration for its own VRA called VaporGrip Xtra Agent to be tank-mixed with XtendiMax. Note that both the Xtendimax herbicide and Engenia herbicide tank mix websites provide a list of approved VRAs and their minimum use rates. VaporGrip Xtra Agents have been approved for use with Engenia herbicide and Sentris Buffering Technology has been approved for use with Xtendimax herbicide.

“At the end of the day, vast amounts of testing (has been conducted) to make sure this product is effective in its performance to reduce volatility, and ultimately that it in no way affects the weed control that people have come to enjoy with XtendiMax,” Alex Zenteno, Bayer Dicamba Product Manager, told CropLife. 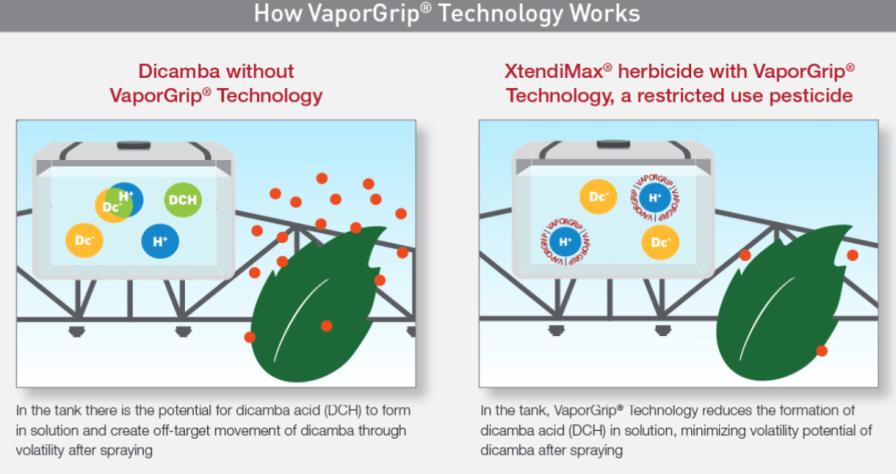 Zenteno pointed out that the approach of VRAs, as opposed to entirely new formulations that come with a lengthy regulatory process, allows users to benefit from the improvements much more rapidly. “To me, it’s exciting. It allows for further comfort of application with products like XtendiMax and further reduces the potential for off-target movement. At the end of the day, it gives growers added comfort and I think as a system, added flexibility.”

Zenteno added that Bayer has offered the University of Tennessee access to VaporGrip Xtra Agent for research, so that Mueller could expand his study, which focused solely on BASF’s Sentris.

Excitement in the Adjuvants Market

New additions to the adjuvants world are far from limited to Sentris and VaporGrip Xtra. (In fact, there are well over 600 adjuvants labeled for use with XtendiMax.)

Helena has launched a VRA, Verified, a VaporGrip Xtra Agent. CropLife spoke with Katie Miesse, Adjuvant Brand Manager, about the product and her perspectives on the status of the adjuvant space.

“I feel like what growers are looking for most is ease. A lot of the younger generation are looking for really progressive programs — not just controlling weeds,” Miesse said, and while the additional requirements add another layer of complexity, they are necessary. She stressed the importance of checking the basic manufacturers’ websites continually to ensure all products and applications under consideration meet label requirements.

“Maintaining the right pH in your tank is important, and that’s what these volatility-reducing agents aim to do. However, the DRAs are still a requirement for making sure that your droplet lands on target,” she said.

WinField United’s 2021 offering is Volt-Edge, a VaporGrip Xtra Agent. Ryan Wolf, WinField United Agronomy Services Manager, said that while standalone VRAs will dominate this year’s marketplace, he expects that combination products of VRAs, water conditioners, and drift-reduction agents (DRAs) in a single jug will roll out in 2022.

Moreover, the adjuvant market, according to Wolf, is coming into its own.

“What we’ve seen is that everybody has been working on dicamba for so many years leading up to now. Now the R&D groups get to look beyond that a bit, and start to look at more innovation,” he said. “We’re looking at releasing two different adjuvants potentially this year, and probably a third the following year. The pipeline’s full. There’s going to be a whole new line of adjuvant categories and improvements as far as mixability, concentrations, and drift control.”

As Darren Unland, Technical Marketing Manager with BASF, explained, historically, the industry emphasized using adjuvants primarily to maximize efficacy. But, over the last several years, the industry has focused on the use of adjuvants to increase product stewardship.

“The thing that has really surprised me is that because the industry has moved in the direction it has to much lower active ingredient rates, it makes delivery of the pesticide much, much more important,” he remarked.

His prediction: “I think we are going to continue moving to use lower AI rates. If you do that, you’re minimizing impact on the environment. That’s what everybody is focused on. We want sustainable agriculture. I think adjuvants have a good role to play here.”

To that end, Attune Agriculture is launching Accomplice, an all-in-one adjuvant designed specifically for row crops to manage both drift and improve pesticide performance. Formulated for maximum compatibility across the spectrum of conventional pesticides, Accomplice is the culmination of 10 years of extensive field and lab testing and can provide 51% more weed control than herbicides alone. EPA approved as a tank mix partner for use with Enlist One, Engenia, and XtendiMax, Accomplice provides 30% greater drift control than four leading DRAs in aerial applications.

Whereas traditional chemistries such as silicones and nonylphenols reduce surface tension and spread droplets on the leaf, “we’ve gone at it in totally different direction. We don’t want drops to spread out too much — we want them to bead up on the leaf surface. That reduces the amount of evaporation just by beading up as opposed to spreading out,” he said. “We get more spray volume on the plant because we have humectants; we increase the amount of time that the droplet has a liquid interface with the plant, and we get increased absorption.”

Quattlebaum had a hunch the product would reduce drift, so he began working with Dr. Greg Kruger at the University of Nebraska to put it to the wind-tunnel test. The results bore out his suspicion: “When you put (Accomplice) in a high-speed, 125 to 145 mph wind tunnel, we separate from the others. Only one or two products are in the same league when it comes to high speed,” he said. The data supports its drift control properties, but the product is also in trials for volatility reduction due to its humectant content and the fact that it produces larger droplets.