There is trepidation, there is reluctance, and there is excitement. Ag retailers feel it all about the new dicamba and 2,4-D technologies finally set to hit the market en masse this spring.

It’s the same story for adjuvant manufacturers, who have toiled for years and spent small mountains of cash designing products to be used specifically with them — and still, as of late winter 2017, sit tight awaiting official word on whether their products can be tank-mixed with dicamba, widely expected to be the bigger of the new blockbuster weed-killing systems. Only a preliminary list of products is approved to go in the tank with Engenia, while word on XtendiMax and FeXapan is likely to hit the companies’ websites any day.

“It’s mission critical to make sure that we have a successful launch of this new technology and this new tool for the 2017 season,” says Dr. Jeff Bunting, Crop Protection Division Manager with Growmark. “This is probably the new era of a weed control system. I lived through the Roundup Ready days back in the mid-1990s … Roundup took over everything within three to four years, and we’re seeing that right now with the adoption and overall interest in dicamba-tolerant soybeans.” The main difference between now and 1996? “The big difference is the increased attention around the technology and the spread of information through social media.” 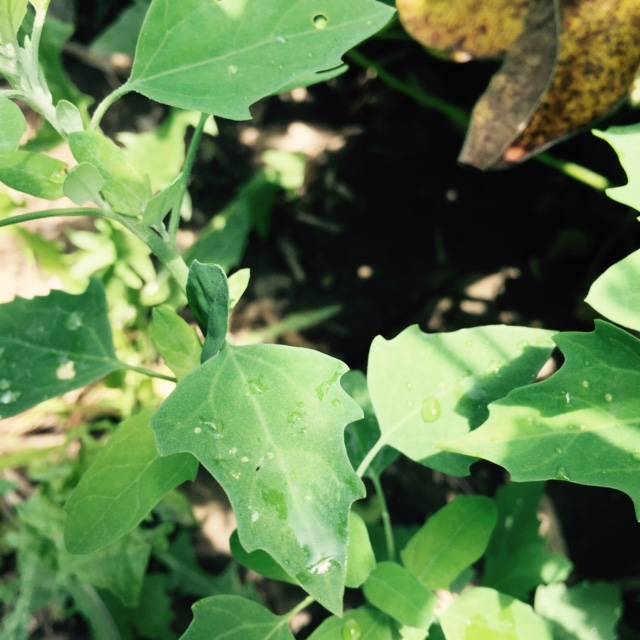 Shown here is an application of Engenia and Precision Laboratories’ Intact with TTI nozzles last summer. The Intact was instrumental in maximizing drift control and retention of large spray droplets created by the TTI nozzles. While coverage on the leaf surface wasn’t what would be required for other herbicides, the combination of Intact and Engenia proved deadly for this lambsquarter.

“We hear everything from retailers saying they don’t want to spray the new technologies (due to liability of off-target movement), to others saying they are reluctant, to others who are just excited to have a tool in their arsenal. The feedback we get is that just trying to manage logistics of the buffer zone is a concern, and potentially the effect dicamba could have for retailers in how they handle these products,” says Jim Reiss, Senior Vice President of Product Development with Precision Laboratories.

Traditionally in the Midwest, a vast majority of tank-mixes are hot-loaded: they are created at the plant, put on a nurse truck and sent out in the field. “That’s probably not going to work for dicamba,” Reiss explains, as that truck means yet one more piece of equipment that is potentially cross-contaminated. “Guys barely think about cleaning out their sprayers, or if they think about it they typically don’t think about cleaning out their nurse equipment, and then potentially cleaning everything at the plant.”

The extra elements to think about make retailers nervous, he says, yet what is reassuring is the energy he sees being channeled into figuring out how to manage it all now, rather than later.

“This is a new day for the industry,” Ray Pigati, Product Technical Specialist with Land O’Lakes’ WinField United, says in an interview with CropLife®. “We have never been in a situation where EPA can so greatly influence the behaviors and decision-making of farmers … it is more important than ever to follow the label to the letter. Before, you read a label once, you knew what it was going to say and you got comfortable. This is a different game — the label is going to change throughout the year, and those changes are going to affect how to spray.”

Retailers and growers must be aware that changes can be made at any time to the lists of accepted tank-mix adjuvants to be used with either Dow AgroSciences’ Enlist Duo, Monsanto’s XtendiMax, BASF’s Engenia, or DuPont’s FeXapan. In an unprecedented step, the applicator must now check a website within seven days of spraying to confirm that the commercial name for the adjuvant is approved with the trait technology. In other words, assume nothing.

One of WinField United’s goals, Pigati says, is to help keep grower partners, retailers and applicators up to date on all changes. Let nothing fall through the cracks. “It’s a better day for everybody” when the company can help shepherd them through the process. Constant communication is just one part of WinField United’s mission to help the new dicamba herbicides perform to maximum potential. Educating retailers through spray clinics and walkarounds on how to clean out a sprayer, how to apply herbicides properly, and how to use the right nozzle are equally important. 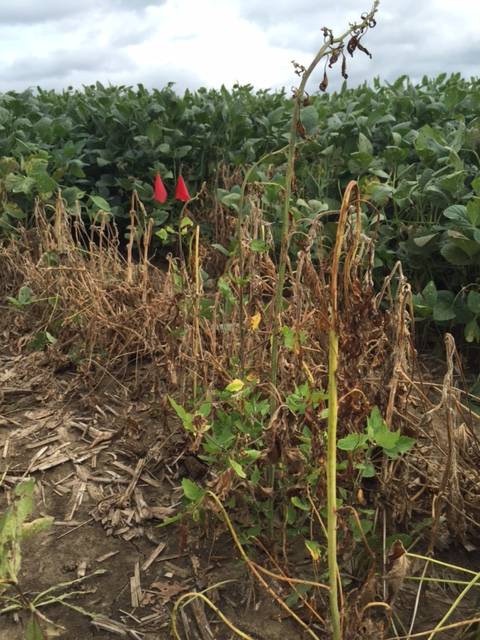 Here is a treatment that demonstrates what can happen when spray droplets get too big and coverage suffers. This particular adjuvant and nozzle combination reduced canopy penetration and coverage resulting in poor control performance on smaller weeds.

Brian Kuehl, Director of Product Development with West Central, echoes the need for communication and emphasis on education. In his interactions with growers, he’s found that adjuvants have not been high on their priority list, but he expects to get more questions as application time closes in. It’s not only the added requirements and liability concerns that can overwhelm, but the dicamba and 2,4-D trait technologies have also fueled a windfall of new choices.

“Today in the U.S. there are, at minimum, 780 different adjuvant brand names from 38 different companies. When you look at that many products, a lot of which function similarly, it is hard for growers and even retailers to wade through which ones they want to utilize,” Kuehl says.

Keeping the dicamba product on-site was important in the past, but will be exponentially more important now. “If we don’t improve upon what happened last year (when off-label dicamba spraying of Xtend crops left the Mid-South with a multitude of drift cases), we won’t be able to keep these technologies in the future,” Kuehl cautions. Part of the problem, he says, was a lack of education around the proper use of dicamba in a mid-season environment, which is more prone to drift situations than application timings that have been more commonly associated with dicamba applications.

“Everything that could have been done wrong was done wrong. Not only is choosing the right adjuvant important, but the education process on how to utilize this technology from the nozzles to varying environmental situations to tank-mix partners to clean out — all of it is going to become extremely important,” he adds.

“We don’t want to be on the five o’clock news. We have enough attention on us already,” as Bunting puts it.

For now, the waiting game continues.

Adam Arellano, Product Manager with Loveland Products, tells CropLife, “If someone had to make a spray decision today, do they go with potentially a very limited tank mix, do they make two passes, or do they stick with their traditional applications for one more year to see if they are able to tank-mix more things? I don’t know. It will likely come down to specific situations.”

There are a plethora of new potential choices — the keyword being “potential.” Make sure to check the appropriate website within seven days of application to ensure the product is approved for use with the product, as changes are being made continually.

The portfolio for Enlist Duo includes:

These technologies either show up on the Enlist Duo approved list by brand name or, under a customer’s private label brand.

In addition to waiting on Deriva’s approval for Engenia, XtendiMax and Roundup Xtend, Precision Labs has also developed a unique portfolio for the dicamba-based herbicides and eagerly awaits the approval of Intact, Intact Xtra, and Ensure Max:

As new herbicide trait technologies for dicamba and 2,4-D tolerance are introduced, there is a growing need for new adjuvants to work alongside these new herbicides since these new systems may not be compatible with adjuvants that contain ammonium sulfate. This, coupled with stringent requirements for better drift reduction and on-target application, is transforming the entire adjuvant landscape. West Central has developed a new adjuvant line to be utilized with the new herbicide technologies as they contain water conditioners without any ammonium sulfate, and do not affect the pH of the herbicide solution.

HOOK Zero also passed Dow AgroSciences’ EPA-mandated protocol and is approved for use as a tank-mix additive for Enlist Duo tank mixes.

“When we put a formula together, performance and flexibility is a key driver. When you are talking about 2,4-D, glyphosate, and dicamba, an all-in-one type offering is beneficial, because typically those aren’t going out by themselves,” says Arellano. “Ideally, you want to put an adjuvant solution together that can get the most out of the whole tank — not just one specific part. Droplet size, spray pattern uniformity, adhesion to the leaf surface, enhanced penetration: these can all be part of an all-in-one type product. And when you’re talking about weak acid herbicides, hard water tie-up is a concern for all of them; that’s why it makes good sense to have a water conditioner as a second offering.”

The company now has three adjuvants approved for use with Engenia, with a fourth in the works (16098):

0 1 5 A New Weed-Control Era Begins: But First, One Last Obstacle