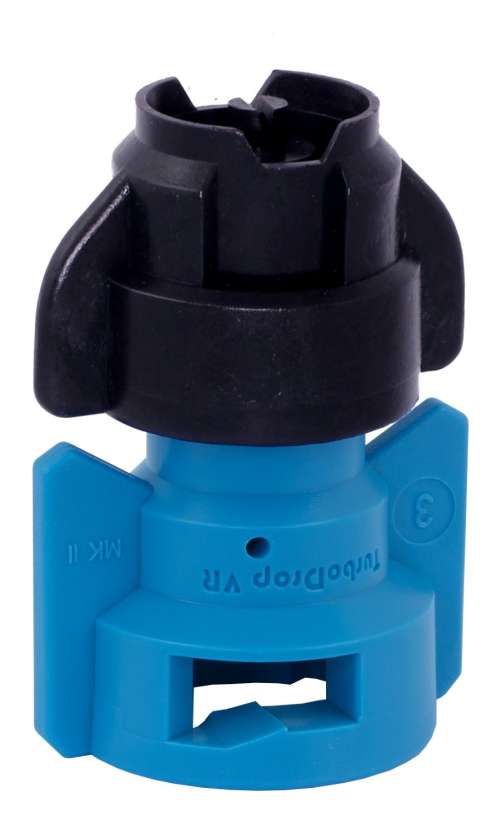 Greenleaf Technologies has announced the introduction of its new TurboDrop MKII Variable Rate Nozzles for agricultural spraying and fertilizer applications in North America. These new nozzles incorporate an advanced computer-designed check valve system that makes them the most advanced variable rate nozzles on the market, with a +/- 5% flow rate accuracy.

“This new technology translates into tangible benefits for spray applicators, as well as increased confidence when using variable rate nozzles in the field,” noted Will Smart, owner of Greenleaf Technologies. “Significant gains in accuracy have been realized while maintaining the operating range of two to three standard nozzle sizes with our single (TDVR) and DualFan (TWVR) spray nozzles.”

According to Smart, the new TurboDrop MKII Variable Rate Nozzles allow applicators to maintain a 3X flow rate at constant speed for variable rate applications, or a 3X speed range at a constant flow rate for variable speed applications. In both cases, flow accuracy remains within a +/- 5% tolerance. Conversely, a conventional metering orifice does not provide the range required to do variable fertilizer applications as demanded by the industry.

“In addition to improvements in accuracy, our new TurboDrop MKII Variable Rate Fertilizer Nozzles are now airless, providing a wider operating range of 10 to 140 psi while eliminating the possibility of fertilizer ‘spitting’ from the side of the nozzle,” Smart added. “This wide operating range allows for a 4-5X rate change at any given speed, or a 4-5X speed range at any given speed, all while maintaining a flow accuracy of +/- 5%.”

The Intersection of Increasing Crop Yields and Integrated Pest Management

Deciphering the IPM Options to Make the Right Decisions