Finding the Future of Agricultural Retail: Download the CropLife PACE Retail 2025 Report
By The SCN Coalition|February 9, 2021

Like SCN, anything that moves the soil moves other parasitic nematodes. “That’s why it’s important to detect what nematodes are in your soil,” Faske says. “Growers in Arkansas can utilize free sampling supported by the soybean checkoff to determine what nematodes are present, and at what population densities.”

Faske says the Coalition’s “What’s your number?” tagline rings as true for Southern soybean growers as those in the heart of the Corn Belt. “Through soil sampling, it’s been determined SRK is the most common nematode threat in Arkansas,” he says. “The Cotton Belt is associated with the highest population densities and distribution of SRK.

“Soils in the northern U.S. soybean-growing areas are too cold for SRK, but almost every crop that is grown in Arkansas, besides peanuts, is a host for SRK, which makes it a challenge to manage,” adds Faske.

Faske recommends soybean growers test soil every three to five years to determine which nematode(s) are present and to see if population densities have changed. “There are a few soybean varieties available that offer resistance to SRK,” he says. “Seed-applied nematicides are also popular. If a grower has an option of having peanuts in their program, it’s good to add that into the rotation, or an SRK-resistant cotton variety.” 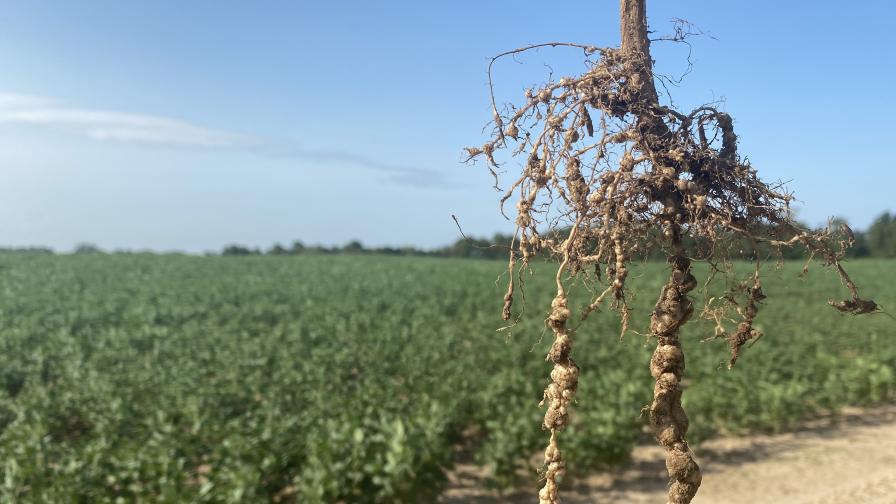 Unlike SCN, in which foliar symptoms are typically absent or mild until nematode numbers develop to high levels, soybean growers can tell there is an issue brewing if a field is infested with SRK. “Within a green field, a bull’s-eye will become visible if high populations of SRK are present,” explains Faske. “Plants will turn yellow, be stunted and prematurely die. That’s when a grower recognizes they have a problem that needs to be investigated.”

During the growing season, Faske says the telltale symptom that SRK has infested fields is to dig up a plant and look at the root system. “When soybean roots are developing, the second-stage juvenile migrates up to the root system to establish a feeding site,” he says. “While the SCN adult females break through the root surface and attach to the exterior of the root, SRK enters and stays in the root and causes it to swell, which is called a gall.“Each of these large galls acts like a rock in the middle of a small stream and reduces water uptake. That’s why plants infected with SRK die prematurely,” he adds.

The SCN Coalition is made up of a diverse group of university researchers and Extension specialists, with a mission to improve the sustainability of soybean production. “The SCN Coalition is expanding its educational efforts beyond SCN to address the multiple nematode threats that soybean growers face, and scientists from the South like Dr. Faske are leading the way,” says Sam Markell, North Dakota State University plant pathologist and one of the leaders of the Coalition.

To encourage Southern soybean growers to sample fields to determine if they have a parasitic nematode issue, as part of its “Let’s Talk Todes” educational campaign, The SCN Coalition produced a series of videos featuring Faske. The Arkansas video collection explains the nematode issues growers in the South face, along with the best management practices and how the soybean checkoff is helping track nematode populations.

The SCN Coalition is a public/checkoff/private partnership formed to increase the number of farmers who are actively managing SCN. Our goal is to increase soybean farmers’ profit potential and realize higher yields. Partners in The SCN Coalition include university scientists from 28 states and Ontario, grower checkoff organizations including the North Central Soybean Research Program, United Soybean Board and several state soybean promotion boards, and corporate partners including BASF, Bayer, Growmark, Nufarm, Pioneer (Corteva), Syngenta, Valent, and Winfield United. See all author stories here.