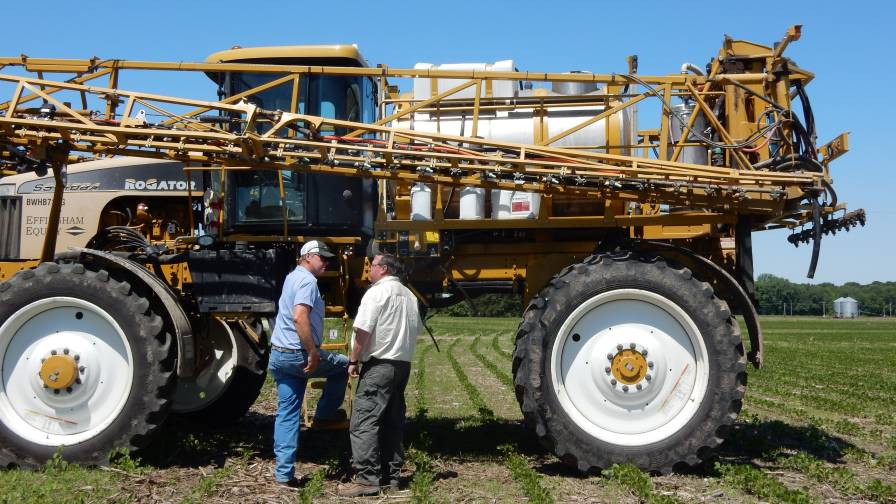 West Central’s Steve Wolfe, left, and an applicator discussing an application of XtendiMax and West Central’s Veracity Elite II. Both products were new for 2017, so education and field experience were key.

One thing you can say about the adjuvant market these days? It’s hot. As concerns about crop protection product efficacy and the environment have grown, so too has interest in spray aids. And now, release of the new herbicide cropping systems has sent suppliers into overdrive to develop helpful tools.

“It’s kind of a race to get the new products out there and be seen as playing a lead role,” says Paul Gerdes, Proprietary Products Manager at West Central Distribution. “It’s a very, very competitive space. There are a lot of good quality products on the market, it’s just growers need to find what works within their retailer — who they trust and have that relationship with.”

Adjuvant suppliers agreed that sales have been trending up over the last few years. “Market share numbers demonstrate that growers see value in new cropping system technologies, particularly in tough weed control situations,” says Terry Abbott, Adjuvant Branded Portfolio Manager with Wilbur-Ellis. “We think that growth will continue. Significant time and effort has gone into adapting to the new cropping systems, including using approved products only.”

This increase shows applicators believe they are adding value to the tank with adjuvants, adds Amber Harrison, Adjuvant Marketing Manager with WinField United. “They are looking for options to ensure it is effective both from agronomic and economic aspects.”

Brett Henson, Market Segment Manager with KALO Inc., has been surprised at the trend toward designer or pesticide-specific adjuvants. “The days of spraying mystery 80:20 and 90:10 nonionic surfactants seems to be gone for the most part,” he says. “The creation of understanding the value at the grower level has driven this effect.”

He believes the opportunity for more adjuvant use with more pre-emergent herbicides, as well as other selective post-emergent herbicides, seems to be growing. “This goes along with what Monsanto has said all along. Dicamba is just a tool in the box, and there are several others (tools) that should be utilized to combat weed resistance,” he points out.

Another trend: Applicators want adjuvants that are simple to use and multi-functional, says Joe Brennan, Product Development Manager, At­lantic-Pacific Agricultural Co. “Mixing multiple adjuvants into a tank mix is not only risky but can be quite costly,” he adds. “It is still amazing the number of growers that still do not consider their adjuvant choice a priority and may not even know what functions their adjuvant performs.”

“It depends on who you talk to,” says KALO’s Henson. “The best adjuvants are clearly vetted and presented on the manufacturer’s list. The best and easiest choices are those that don’t induce dicamba volatility and offer drift mitigation and water conditioning, an all-in-one adjuvant. Products are approved or they aren’t. Pretty straight forward.”

WinField United’s Harrison reported the company was not hearing so much about confusion, but that growers want to be the best stewards possible of the dicamba system and have the best adjuvant recommendation that reduces the risk of drift and crop injury.

Dr. Bill Johnson, Professor of Weed Science at Pur­due University, found that most growers didn’t realize that a drift reducing agent was required when dicamba is applied with many tank mix herbicide partners — and didn’t realize they needed to check manufacturers’ websites for a list of approved ones.

“The initial launch of the EPA-approved tank mix partners list was a bit confusing for everyone,” believes Atlantic-Pacific Ag’s Brennan. “At the beginning it was very limited and contained only a small number of approved products.”

He found the biggest questions about adjuvants revolved around the use of water conditioners and DRAs. He says growers so accustomed to adding a required water conditioner to glyphosate thought they had to use one with dicamba. And for years their go-to conditioner has been ammonium sulfate (AMS).

“It is a great water conditioner, it’s inexpensive, and it works really, really well,” points out West Central’s Gerdes. But with the new cropping system, AMS increases dicamba’s volatility and the risk of off-target movement. Therefore, it’s not allowed to be tank mixed with dicamba. (Monsanto has clarified that water conditioners are not a requirement, but may provide benefits in hard water situations.)

In fact in 2017, dicamba labels stated that users cannot have any AMS in the tank and featured even stronger language about no ammonium tank mix partners. Labels also require applicators to clean tanks and lines before and as well as after spraying dicamba.

The issue has opened the door for new water conditioning systems to come onto the market. “Whenever there’s change, there’s opportunity. You’ve seen a ton of new chemistries — adjuvants — come to market because of this. And we have the opportunity to educate our customers through the process,” Gerdes says.

For its new dicamba-geared adjuvants, West Central’s product development team had actually been at work for 18 months ahead of last year’s herbicide system launch, to make sure the tools worked.

At the retailer level, he says rapid expansion of DRA options for some dicamba formulations and delays for other formulations have been causing concern and some confusion — but mostly frustration. “Retailers would prefer to handle one adjuvant technology that works with all brands of dicamba,” he says.

Many of the new adjuvants can be used in regular cropping systems as well.

“It really deals with what our customers’ needs are, what percent market share dicamba has in their territories, and how many adjuvants they want to keep in the shed,” says Gerdes. “They’re trying to keep it simple for their customers as well.

“We’re trying to meet all of our customers’ demands across all cropping systems with as few products as possible, making sure we don’t miss a need. It deals with operational efficiency, the fewer packages they can have, that adds a layer of ease.”

West Central has sponsored three webinars in the last 18 months to educate not only its retail customers but farmer customers. Nearly 900 attendees logged on.

And for the last two years, every time the company has had an on-site or public forum training, the dicamba systems take up a good chunk of the agenda. Gerdes points out that with such a big industry transition, hearing instructions once might not be enough, and repetition is a good thing.

Along with mandatory trainings, WinField United is conducting Acres of Insights meetings with customers that are focused on the dicamba acre. Spray clinics are a major part and show the importance of correct nozzle selection, tank clean out, application requirements, among other topics.

Abbott says Wilbur-Ellis has a multi-faced approach. It has developed new specialized and detailed policies and procedures on the cropping systems; now requires multiple, in-person training sessions for every Wilbur-Ellis applicator; and established a dicamba-specific task force. The company also implemented an in-season tracking and response process that will quickly and efficiently inform staff plus “empowered employees who have local responsibility and authority to cease application if adverse effects were being reported.”

BRANDT is participating in a number of winter meetings with customers and growers and is using this forum to educate the market on the new BRANDT nutrition and adjuvant products that are approved for use with the new cropping systems, and to provide technical training and support. The company has also set up a dedicated webpage (www.brandt.co/tankmixapprovals) and sales sheets to help keep customers and BRANDT’s sales team up to date on the latest product approvals for just its offerings.

“The EPA has reorganized the product labels so that they are easier to follow,” says BRANDT’s Dave Bower, Adjuvants Product Manager. “Maintaining records as the label now requires will help provide a checklist of best management practices to guide all those involved. The 2019 use season and beyond is in the hands of successfully following these steps — I truly believe everyone wants to be a good neighbor.”

Through this year’s pre-season booking period, Precision Labs’ Reiss says there’s been a lack of clarity on approved drift reduction agents (DRAs) with some of the dicamba-based products. “Hopefully testing will be completed soon and with it, the lack of clarity,” he adds.

The good news: He thinks that by the time the industry gets into the application season there will be few if any changes to labels. And with a year of experience, applicators will be more accustomed to monitoring the appropriate websites for updates.

Purdue University’s Johnson sees more emphasis in coming days on combo products that are built specifically for the most popular herbicides. And KALO’s Henson anticipates continued progress in adjuvants, including specialty tank cleaners. In fact, the company will be introducing a new tank cleaner designed for dicamba that includes “Fenton Technology” for distribution to private label. The product is still a few months away from initial production. The technology utilizes a reaction involving hydrogen peroxide and ferrous sulfate to destroy any organic compounds in the spray tank.

WinField United’s Harrison also notes that the company is continuing to work with partners to understand what the next five to seven years will bring, so that the it’s prepared when new technologies come to market. And WinField’s Infinity Group, located in the Innovation Center at River Falls, WI, continues to research and develop recommendations for the new cropping systems. It includes spray application laboratories with state-of-the-art technology, including a wind tunnel, one of the few in the U.S. The facility evaluates the entire application process, including crop protection and adjuvant formulations, tank mixes, nozzle performance, spray characterization, drift and droplet deposition and plant uptake.

New technologies are coming to market in the next three to five years that West Central is already trying to get in front of, says Gerdes. The company is especially focusing on adjuvant testing to make sure products do what they say in terms of efficacy, product quality and shelf life.

“I think there will always be innovation in the adjuvant space, but it may not happen as quickly as it once did,” says Precision Labs’ Reiss. “There are now significantly more hurdles to entry with approval processes in place for some crop protection products.”

The need for adjuvants will continue to increase, says Atlantic-Pacific Ag’s Brennan. As new chemistries are developed, adjuvants will become even more critical for maximizing their performance. In particular, companies will develop technologies for the purpose of offsetting the increased cost of the new cropping systems.

The Intersection of Increasing Crop Yields and Integrated Pest Management