With the rise of precision agriculture solutions, the farming industry has become increasingly tech savvy. Many growers and producers have embraced GPS-enabled tractors, variable-rate fertilizer applications, and smart platforms that monitor everything from pest populations to yield performance.

Now, the latest drone technologies are improving another common farming task: fungicide applications. Drone systems company Rantizo is leading the charge. The company sells a turnkey system optimized for drone spraying and other applications that include autonomous drones, supporting equipment, and licensing and technical support. They work with a network of application services contractors and agribusinesses to supply them with everything needed to provide services such as variable applications of fungicides to growers.

“I really like super-precise applications,” says CEO Michael Ott, who previously invented a technology to deliver tiny amounts of nitrogen to the exact right location of a rice seed at the exact right time. “With fungicide applications, there are portions of the field that are going to get a substantial benefit from a fungicide and other portions of the field that are not. Variable applications mean you’re only applying in those spots where you’re going to get the benefit.”

Variable Rate versus Variable Application
Not to be confused with variable-rate applications that apply different amounts of product in different areas, variable applications focus on the fields, soil types, and hybrids that will best benefit from fungicide sprays. The applications are then delivered only to those select spots. 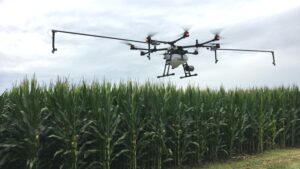 With corn, for example, certain hybrids respond well to fungicides, and growers can expect an eight to 12 bushel increase. Other hybrids may only produce an extra two bushels—or none at all—when treated with fungicide.

Variable applications offer a simple solution. Growers spray fungicide to maximize the areas where there’s an eight-to-12 bushel increase and avoid spraying areas that only produce an extra two bushels.

The Benefit of Drone-Delivered Applications
While variable applications of fungicides could technically be applied manually or using tractors and spray rigs, there are several reasons to opt for drone applications. 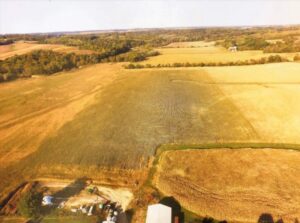 One is that timing is critical. Fungicides have a low residual, so they must be applied at just the right time to optimize effectiveness. Achieving the right application timing with traditional farm equipment can be challenging for a number of reasons.

“One benefit of the drone is that it can get into the field late in the season without any crop damage whatsoever,” Ott says. “In Iowa, a lot of people like to apply fungicides around the July timeframe where you’ve got three- or four-feet-tall soy beans and seven-to-nine-feet-tall corn, and every time you drive through, you’re damaging the crop, compacting the soil, and you are reducing the economic gains you’re getting from the fungicide.

“Similarly, after it rains, you have a short window to apply the fungicides, but you can’t drive through the field,” he continues. “Rantizo can get our drones in there without any issue at all.”

Rantizo has also made it easy to deploy drones for variable application of fungicide. They partner with imagery and data analytics companies to facilitate a complete precision systems approach for their application services providers to leverage for their customers. Imagery data determines where variable fungicide applications will be most effective.

That data is then seamlessly used to map out fields ahead of time, indicating the missions for the drone to Fly & Apply® along with areas to avoid where the crop is damaged due to high winds, hungry deer, or other issues.

For Ryan Gibbs, a Rantizo application services contractor and an eastern Iowa farmer who raises hogs and cattle and grows corn, soybeans, cover crop, and alfalfa, this process provides a real return on investment for his customers and on his own farm.

“I’ve got an 80-acre field, but I don’t want to spray the outside rows or near the creek or by the timber where the deer eat the corn,” he says. “Why spray those areas when I’m getting no use out of it? For me, I can take the drone out there and just map the field that needs to be sprayed, and I’ll only spray about 65 acres.”

Gibbs has even surprised his customers by finding crop damage they didn’t know existed. Now in his third year of drone-delivered variable applications, Gibbs says he can always expect two questions from growers: Will this service pay for itself and have you ever wrecked the drone?

“For the first question, that’s where I pull out my trusty phone and show them what I’ve seen on my farm and do the math,” he says. “For the second, don’t get me wrong, I’ve had to emergency land it when I let the battery get too low, but I have 2,500 acres flown under my belt and no wrecks.”

Ultimately, Gibbs sees these questions as proof that drone technology, while still relatively new to the industry, will continue to improve application delivery for the better.

“The drones are only going to get better, but they’re here to stay,” he says. “I still talk to customers who tell me they never knew this was even possible, so I definitely see a future where variable-application spraying is going to take off. It’s just a matter of putting it all together and being able to synchronize our systems.”