Paul Welbig was hired as Raven Industries’ first product manager in 2000: the dawn of precision agriculture.

“Back in those days,” Welbig says, “it was GPS receivers and light-bars and guidance systems.” Along came the Viper, the company’s original field computer display. In the 18 years since, Welbig has witnessed a transformation into an incredibly data-driven, digitized industry.

Raven and others continue to deliver tools aimed at making it simpler for ag retailers to engage with their customers. “The grower, more so now than ever, is demanding proof of your work as the ag retailer. Having a way to do that more seamlessly, vs. paper, by using our technology allows them to do that more easily because it’s all digitized and online. That’s one way to provide better service to growers,” says Welbig, who serves as Director of Slingshot Services and Logistics for Raven.

“It’s a two-way street,” he adds. “Growers are also getting more data on planting, applications, and harvest, and need to get that data to the retailers and to their agronomists so they can accurately analyze and prescribe what needs to be done on their fields.”

Several generations since that first iteration of Viper, the Viper 4+, which has been on the market for a few years, will be integrating capabilities of the newly acquired AgSync with a major software update this summer.

“In the past you had to have paper, an iPad, or Android tablet in the cab to facilitate some of the work, as well as have display in the machine to fulfill the job. From an operator’s perspective, it’s repetitive work. With AgSync and with what we’re trying to do with Viper 4+, we eliminate the need for an extra display in cab and have the functionality integrated so the operator has an easier workload,” Welbig explains. “It completes the records that everyone upstream and downstream would want to receive from that application, and we can all handle that in one display in the cab.

“If you’re an ag retailer, we integrate the interface with different software systems to help the operations manager schedule work and send out to the field and back to the field operations, provide documentation, and send records back. Retailers can use it to invoice against and make application reports for later use if need be. It’s like having a shot of steroids for Slingshot,” Welbig says, referring to the company’s suite of connected hardware, software, and logistical services that optimize planning, executing, and recording field applications.

Welbig reassures that the software update will be confusion-free. “That’s part of the magic,” he says, noting that key customers got a sneak peek at events held over the spring. The latest version will pre-populate various configurations an operator would typically have to start from scratch, taking much of the work out of their hands. “It’s always a balancing act. You don’t want to make a big dramatic change to the user interface, yet you’re enabling dramatic new functionality. It’s invisible to the user.”

With the Slingshot API, Topcon Agriculture is able to provide data through a wireless connection with compatible Raven hardware in the field and offer a seamless integration of their solution to their customers. Additionally, customers can access the necessary tools and data with the use of Slingshot. 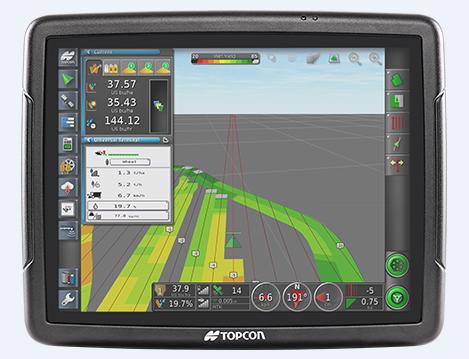 “Topcon Ag’s strategy as it relates to our new digital solution, Topcon Agriculture Platform (TAP), is one of partnerships, connectivity, and collaboration. This partnership with Raven embodies that philosophy ideally. It demonstrates that two companies, competing in the same space, can collaborate to provide additional value to the producer, dealer, and OEM,” says Brian Sorbe, Vice President of Sales and Marketing for Topcon Agriculture.

Topcon is known for its X family of consoles, including the premium 12.1-inch X35, which utilizes the new Remote Support Tool, allowing technicians to control and fix issues remotely. Now native within Topcon Horizon Software, the tool operates as fluidly as having a support representative in cab. The X35 can now replicate feature views/windows on virtually any mobile device. 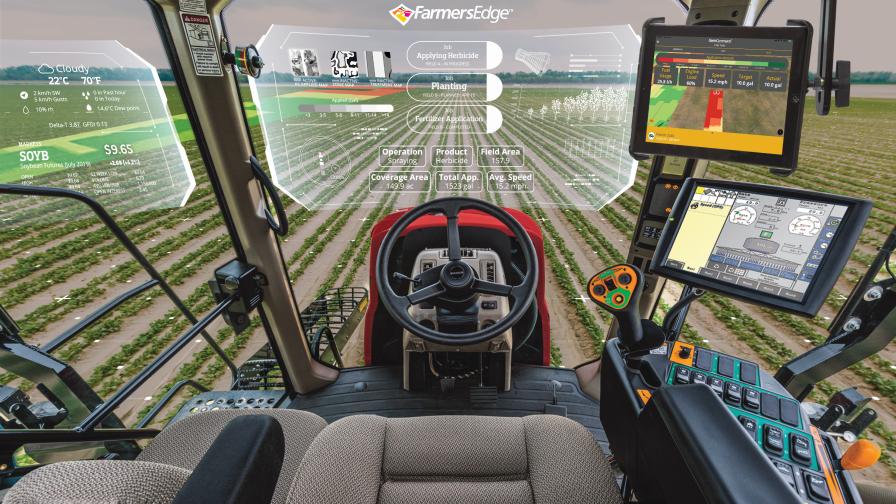 “You’re going to be able to see every unit moving in that field, all at one time. You’ll be able to track in a harvest situation, track production by load tickets, track load tickets, and essentially tie your production contract to a bunker or bin. We’re essentially now tracking product from the field to the storage unit to elevator and onto the production contract. It’s full traceability of production,” Jamie Denbow, Global Digital Ag Lead, tells CropLife® magazine.

One trend several companies we spoke with centered on the increased ISOBUS compatibility of displays and ability to interface with different components. “Although we would love for it to happen that every single display is a Raven, the reality is it’s not,” Welbig says.

“Some companies do applications really well, but others offer different capabilities, too. You want to be able to control all of that accurately through one user interface. It creates a more compatible atmosphere to work in, so that things are kind of plug-and-play, and there’s not a major difference between one or the other,” he adds. “I’m not here to paint a utopian picture that it all works, but as far as trends go, having more ability to interface with ISOBUS-compatible solutions is certainly something that is a trend and will continue to expand.”

TeeJet Technologies released a new software update in May for its DynaJet 7140 pulse-width modulation (PWM) nozzle control system, which allows the user to adjust droplet size from a compact touchscreen in the cab.

“It also allows for a wider operating range from a single tip,” says Tim Stuenkel, Global Marketing Communications Manager, “so you might have twice as much speed range as you would from a standard six-orifice tip.”

It is also ISOBUS compatible and has added features, such as turn compensation and higher resolution tip shut-off. “There is so much clutter in the cab, and ISOBUS helps keeps it cleaner and organized,” Stuenkel adds.

“In the future we expect user interfaces on application equipment will provide greater autonomous operation of machines and their application systems — including more advanced remote monitoring and control,” says David Webster, Director of Application Equipment Marketing at AGCO.

These advances will address several trends in agriculture centered around issues of environmental sustainability: the careful stewardship of crop protection products; more intense crop nutrient management following the 4R approach; and the need for more precise acre-by-acre nutrient management to optimize yield and producer returns, Webster says, adding: “Management of these future needs means that set-up and execution of precision application will increasingly be controlled, monitored, and documented from a remote location rather than by an operator in the machine.”

Machine and application system controls (liquid, dry spreader controls) are all located on the adjustable armrest, which features a conveniently located, ergonomic joystick that controls the shuttle shift and speed. The intuitive, 10.4-inch touchscreen AccuTerminal operating terminal also is on the armrest. 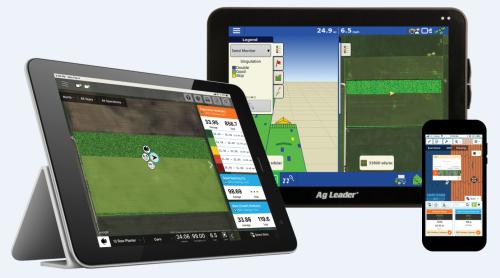 From Ag Leader is the latest update to its AgFiniti full-farm connectivity platform. Jenna Royer, Marketing Manager, says the InCommand display not only gathers information but also flows it across other devices that might be in use in the operation, such as tablets or phones. Live mapping, prescriptions on the go, and multi-year yield analysis are key tools.

“They’re able to track live what’s happening in the cab, so everybody’s in the know. It really increases productivity and flows information through in an easy way, so the operator can make more confident decisions in real time. From the cab on the InCommand display or from an iPad anywhere, all members of the operation can see the location, speed, rate, and other key pieces of information from all supporting machines to maximize time and efficiency. Information just flows automatically and is there when they need it,” Royer tells CropLife.

“It’s connecting all the pieces, all the operators, machines, and their devices to really use that information that’s so powerful that’s coming out of the cab,” she adds. “Everything is talking. The displays are sharing,” she says of the wider trend in precision agriculture.

Trimble released the ISOBUS-compatible GFX-750 display system at the end of 2017 at Agritechnica and this year introduced some new features for the platform’s Precision-IQ user interface. Those features include Bluetooth tags and AutoSync. AutoSync works in the background to automatically sync all guidance lines, field names, boundaries, landmarks, and operator information across all connected devices in farm operation — including Trimble TMX-2050 and GFX-750 displays and in Trimble Ag Software from a user’s computer or any mobile device.

“Traditionally we had all our controllers in the cab. We simplified our architecture, combined our receiver and steering controller into one unit, and that mounts on the tractor and communicates with the display,” says Frank Fidanza, Program Marketing Manager with Trimble. 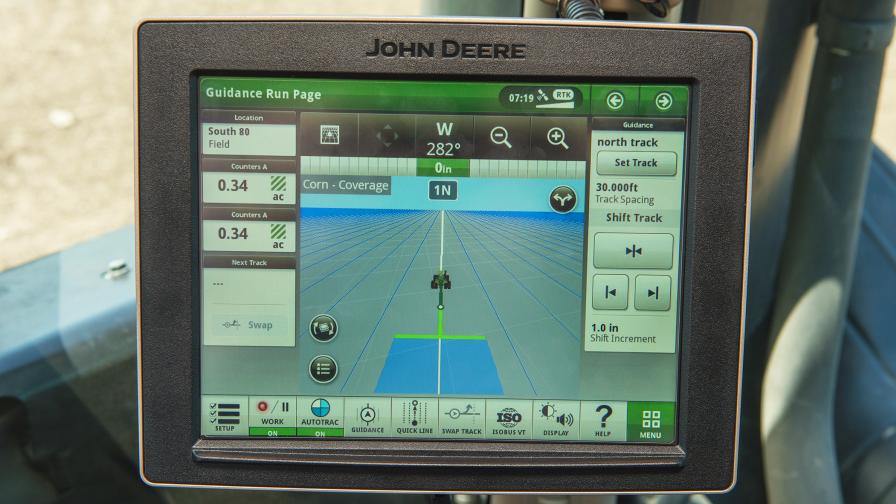 Earlier in 2019 John Deere further enhanced the automation, documentation, functionality, and security of its Generation 4 4600 CommandCenter and 4640 Universal Displays with the release of its 19-1 software update. This software release includes a higher level of automation activation that enables the company’s Machine Sync harvest automation functionality on the Gen 4 platform for tractors and combines.

According to John Mishler, Marketing Manager for Precision Ag Technologies at John Deere, the update provides more features that customers will benefit from immediately. “It also enables Gen 4 Display compatibility with more John Deere equipment, including 8000- and 9000-Series Forage Harvesters, and documentation of weather and field conditions, and expands AutoTrac functionality and automation on more equipment and provides additional levels of security than before,” Mishler says.

Gen 4 Displays now show area remaining and estimated time to completion for many field operations. It also doubles the number of legend colors on the display, so operators can view yield, prescriptions, and as-applied maps in much greater detail when viewed on the display or in the John Deere Operations Center.

Operators can now manually document weather and field conditions from the cab, which can be critical information to include for application and planting records. Data that can be recorded includes wind speed and direction, weather, and soil and field conditions as they change throughout the day.

Along with the software update, John Deere is expanding its Machine Sync feature, which synchronizes tractor and grain cart speed and position with the combine for on-the-go unloading during harvest. Gen 4 Machine Sync uses newer technology already built into all S700 combines and is available at a much lower total solution cost than with previous generations of displays.

“Machine Sync greatly simplifies harvest by automating the combine unloading process, allowing the operator to focus on harvesting the crop or other machine functions,” Mishler says. “Its use has proven to speed up harvest operations and reduce grain loss and stress on both the combine and grain cart operators during this busy time, especially when harvesting at night or when visibility is compromised.”

A Farewell to Facts: Is Fighting Fake News a Losing Battle for Agriculture?